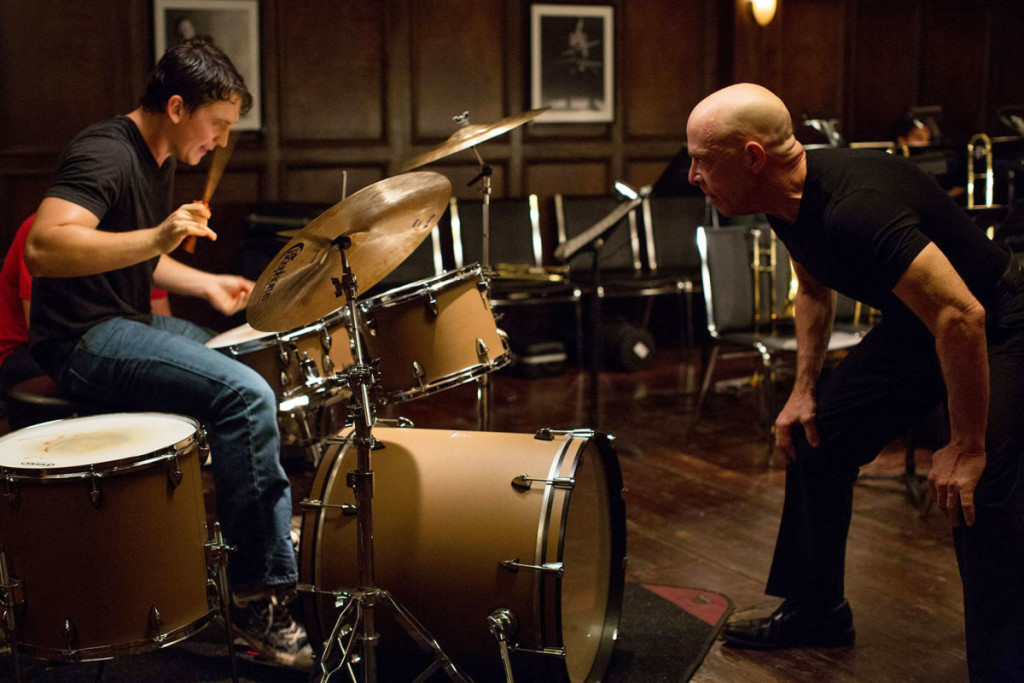 Everyone cares about something. Some people care for human life—children, parents, lovers. Some are also very passionate about inanimate objects—cell phones, computers, make up. Above all else, there is always one thing that we care about, one thing that we would push ourselves to the most challenging limits for, would defy all odds, something that cannot be changed: our dreams. And we try to achieve our dreams by being driven. Even though sometimes we are driven right into a brick wall.

In 2014, Damien Chazelle wrote and directed the film Whiplash. Andrew Neiman (Miles Teller) is an ambitious young jazz drummer in pursuit of rising to the top of his elite music conservatory. Terence Fletcher (J.K. Simmons), an instructor known for his terrifying teaching methods, discovers Andrew and transforms the aspiring drummer into part of the top jazz ensemble, forever changing the young man’s life. But Andrew’s passion to achieve perfection quickly spirals into obsession, as his increasingly ruthless teacher pushes him to the brink of his ability and his sanity.

After watching Whiplash, I felt nostalgic. I’m not saying I was punching my drum set in the middle of the night from anger, or cursing out my family during dinner. Though this film may seem outlandish to most musicians—more so to drummers—it did take into account how far people might suffer for magnitude.

I was a drummer for a number of years and, in those years I have never pushed myself harder. For all four years of high school, I was in the marching band. Day in and day out we worked, five days a week for the band, six days a week for the drumline. In my position as head snare, for six hours a day, you have a ten pound drum strapped to your waist, sweating buckets and playing until your wrists hurt, running two and half miles with your instrument alongside the rest of the band and cursing out the flute players.

When I wasn’t in marching band, it was concert band season, where we had twice the amount of music and twice the amount of emotional turmoil. Now I never got a chair flung at me during this time, but chalkboard erasers, music stands, and hammer-like mallets were just as terrible.

And like in the film, there was a lot of Neiman/Fletcher tension in my life.

Freshman year of high school, I had conquered performing in front of thousands of people at Hofstra University during marching band season, and as we segued into concert band season, I was put on snare drum. In my high school, that was a very big deal.

My part started at the beginning of whatever piece it was at the time. The tempo marking was about 180 beats per minute—about twice the speed of a person’s heartbeat. The teacher gave one count off, and I missed it. I was positive he wasn’t listening, but he stopped the entire band, looked at me, and said, “Let’s do that again.” He counted off. I wasn’t with the tempo, and he started again. On the third time, he looked up at me and told me to get out. Confused, fourteen-year-old me just stood there. I wasn’t really sure if he was speaking to me or to someone near me. And then he said, “Chantel Vereen, I do not want you here. You obviously don’t have the mental capacity to stay in time with me. Get out. You’re done.” Even then, I did not understand he was actually, really talking to me. “Are you deaf?,” he yelled. “Get out. You’re not worth being here.”

So I left. And I spent the next thirty minutes in the bathroom crying. I swore to myself I would never be humiliated like that again for as long as I lived. That afternoon, I practiced until the janitors kicked me off. In a single day, I had practiced every piece of music we had received—even though a lot of it wasn’t due until December. I had that whip-to-the-face, and it felt worth the pain.

As for Whiplash, it seemed even to me outrageous how abusive Fletcher was—verbally and physically. I could never see anyone get into a traumatic car crash, only to flee the scene and then arrive later to knock out their professor. All I thought was: Have you lost your damn mind?

But, then: dreams are worth it, aren’t they?

During that time in my life when I practiced past the pain I, like Neiman, assumed that this was my calling. The time I took, the suffering I endured, was going to lead me to greatness. Our teachers—though I cursed them out in my head every time they made me run a lap—pushed us for a reason. They pushed us to show us we were great. The mental breakdowns in practice rooms and the meltdowns before a performance were what kept me alive; they kept me from becoming a drone— someone who took in pain and but couldn’t learn from it. It hurts, leaves you crying by yourself, but it wakes you up. In a way, you are fighting back by proving you can be someone. We, as dreamers or drummers, want to feel endless.

Chantel Vereen is a junior Professional Writing major at York College of Pennsylvania. She is from Long Island.