One afternoon when I might’ve been thirteen years old my father came home in his paint-splattered truck, more than intent. He limp-stomped inside the house—this was summer, and I sat at the kitchen table drinking Kool-Aid sloppily so as to dye my upper lip red—and he jerked his thumb toward the door. I looked up scared, as I did at least once a day. Did I forget to cut the grass, clean the gutters, wash yesterday’s brushes, or let my mother pass out in the lounge chair she set up in the back yard on the edge of where she believed we needed a swimming pool? I should mention that my father was a house painter, and if he’d’ve lived in a time where every student got free psychological tests he would’ve certainly been diagnosed with ADD, ADHD, all those others. I doubt another house painter in the South had placed so many of his half-filled gallons of Sherwin-Williams in the back of the truck, forgotten to tamp down the lids, then driven fast toward home as many times as my father. You could drive all over Dreytown and see where my father had been, from the streaks of latex that toppled over in the bed of his truck, then drained out the bottom of his tailgate like so much bulldog flews-slobber. Dreytown homeowners had a thing for light blue and yellow back then. I wasn’t much of a sports fan, but I would bet that anyone following a college team with such colors would’ve felt welcomed in the town of my upbringing.

That’s right: Dreytown. A “drey” is an old-fashioned word for a squirrel’s nest. According to legend—and it’s now on Wikipedia because I put it there—some Scottish-Irish settlers came through the area hungry, looked up, got out their muskets or long rifles or slingshots, killed a couple score of fox and gray squirrels, celebrated with a good stew, then settled.

My father kept his thumb pointed toward the carport. I said, “What? What did I do? I didn’t do anything.”

“You got to come look at this,” my father said. “I need to teach you a lesson.”

I licked my upper lip over and over. A previous lesson involved how no one ever trusted a red-mustached man or woman. That lecture turned into something about Erik the Red—I’m not sure how he knew about a Viking—and then a guy named Boyt Lott my mom dated in high school, who had red hair and ended up being a funeral director.

I got up out of the gold paisley vinyl-backed kitchen chair and hopped the one step down into the carport. Did I leave the mailbox door open, forget to pick up the paper that morning, or leave the hose running when I was supposed to spray my mom hourly in her lounge chair so she could feel as if she stood near a waterfall? My father’s pickup didn’t drip paint on the cement driveway, which would make my mother happy enough. If I’d’ve been a skateboarder back then I could’ve practiced on the short vert wall of dried paint, like a rubbery multi-colored stalagmite, that grew on the cement. He said, “Look in the back what I got today.”

I peered over the bed’s rim and saw thirty box turtles in various realms of distress. Some of them had turned over and wiggled their legs in that internationally understood fauna language of turn-me-over! Others remained anchored. All of them owned slight blue or gold paint on their shells. It took some years for me to understand that my father hadn’t worked a lick that day, that he’d plain driven the countryside, on the lookout for tortoises wishing to cross a two-lane.

My father smiled, finally. He nodded his head up and down about ten seconds too long. He said, “Let me tell you something, Cock. I need to teach you something about amphibians on the move.”

I didn’t say, “They’re reptiles.” A wooden paint stirrer hurts more than a belt or switch.

“I read something the other day,” he said. I don’t know how the human mind works, but looking back all these years I truly believe that if he’d never read this particular article, which ended up being printed in the Dreytown Herald’s Friday edition that always featured Fun Facts to Know and Tell on the opposite side of Beetle Bailey, Charlie Brown, the Born Loser, Ziggy, and that one about a guy named Leroy—all comics that featured men who’d never amount to anything—I would not’ve spent five years in a single-parent household. My father said, “I read about how you shouldn’t ever pick up a turtle and take it away from where it’s going. Turtle like this? It roams around like a square mile all its life. If you take it out of its habitat, it’ll get confused and quit eating and die.” He spent about a half-minute saying the word “habitat,” stressing every syllable equally.

My father called me Cock. My real name’s Julian. We are Walkers. My mother wanted to name me after her favorite uncle, Uncle Julian. My father thought it sounded like a girl’s name. I don’t know what made him relent, but he always called me “Cock”—Cock Walker.

I said, “Are you going to take these things back to where you got them?” How could he remember which were which, and where he picked them up, I thought even then.

My father shook his head. “That’s my lesson. Life is not fair.”

I looked at the tortoises. I wasn’t tall enough to reach over and down in order to flip the upside-down ones. I said, “You need to take them back.”

My mother came out of wherever she’d been hiding. She yelled out, “We’re out of Dr. Pepper, goddamn it,” talking to my father. She yelled out, “Did you remember to stop by the store?” She said, “You don’t like the way I want to spend my days? I need some Dr. Pepper.”

My father didn’t look her way. I did. She’d spread some kind of avocado spread on her face and wore thin cucumber slices plugged into her eyes sockets. My father said to me, “You either realize that you need to stay in the place where you were born, or you take the chance of dying out there elsewhere.” He said, “Yep. Yep. Yep.”

I said, “Tonight’s Hungarian goulash night,” because that’s how we lived.

To read the rest of this story, please purchase a print copy of Story #7, Spring 2020. Photo courtesy of Conserve Wildlife Foundation of NJ; view more of their work on Flickr. 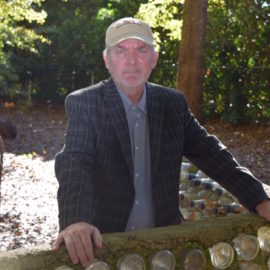 George Singleton has published nine collections of stories, two novels, and a book of writing advice. In September 2020, Hub City Press published You Want More: Selected Stories of George Singleton, which is composed of 30 of his best stories. He received the John William Corrington Award for Literary Excellence from Centenary College in 2016, …