Allison was wedged between the baby and her husband, Jacob, both asleep, both quietly snoring, the baby making small, piglet-like noises. Their faces, fuzzed by the darkness, were similarly childlike. For the first several days in the new house, the type of house they had casually and reasonably dreamed of for so long – an old brick Craftsman, bought on librarians’ (technically she was an archivist) salaries – she had felt enshrouded. Safely entombed in the old, plaster walls. But something had happened to shake it, this feeling of security. If she was honest, it had been happening for some time. Nights like this, awake, unable to decide from where exactly her restlessness arose, her mind darting in different directions. She tried to distract herself. She had her phone out and was staring at it mindlessly: a new highchair, a dress that would not fit her, not right now, a new swimming suit for their daughter, Emma. It wasn’t working.

Upstairs, Emma was sleeping – her eighth birthday had occurred earlier that day. There had been a small party, only a couple children from the street, which was what Emma had wanted. They had been distant and isolated for a year, then things had opened back up, but still: they kept the party small. Allison had taken the girls to a pottery studio (they wore masks), worked with clay, threw pots, and then painted others already finished. Emma was happy – she had made a coffee mug, a small bowl. She joked with her friends, ate several cupcakes, smiled for photos. After the studio, Emma’s friends had gone home, and then she had met on video with family dispersed across the country. The family’s sleepy faces, boxed-in and weirdly lighted, had appeared in order to sing happy birthday, talk for a few minutes, and congratulate the girl on being born. She thanked them, and Allison saw she was tired or bored or both. But Allison was thinking about other things. Only a few months before, the entire family had been together for Christmas, in cold, cold Minnesota; Allison had hated traveling there. Even then, a few months before that, the sixtieth wedding anniversary of Allison’s grandparents, her daughter’s great grandparents, again the whole family gathered, that time in rural Nebraska. Corn. Flatlands. Everyone was spaced out at picnic tables, masks on inside. Christmas was looser, with testing beforehand. It had been rare for her to see her family – the entirety of them – so often, but with baby Connor’s arrival and people becoming accustomed to the virus, everyone wanted her there. She wouldn’t have missed her grandparents’ anniversary. Christmas she could’ve done without.

Now in bed, what had bothered Allison during the day was more present: her cousin had been on the video call. She hadn’t seen him in years, then all of a sudden the anniversary that doubled as a family reunion, the Christmas in Oneota, which her mother insisted she come to. For years, he was no longer in her life, then, suddenly, he was there again, sitting at the same table as her, as her daughter, as the other children in the family. Emma and his girls remembered each other, jumped on the trampoline, made friends. Now this video call. She had not invited him. She had actually had a difficult time concealing her shock at seeing his face, both the face of the young cousin she knew and a man she did not recognize, then she had a difficult time stifling the feeling that she wanted to show him how well she was, how well her life had turned out, that despite him, she was here, wherever that was, that she had done better than him, which had made her disgusted with herself. He had a thick beard now – not unlike his father, who had died in a tractor accident when Kevin was young, a boy – that made his blue eyes seem half-awake. Those eyes had looked grey on the Skype call. They watched her when she spoke about work, about her daughter. There was nowhere to go. In the more distant past, when she was still growing up, still in college and visiting home for Fourth of July or Christmas, she had had a plan: she would go to another room, or outside to the yard with the kids, or she’d pretend to go find old photo albums. Away from him, isolating herself.  But she hadn’t been able to take herself away today, and what she also couldn’t take away was the fact that her mother, her aunt, her cousins – all who knew, or who knew some version of the events – seemed to accept that all was okay now. That this was in the past. In actuality, it was not only in the past, it was not even something the family accepted as a reality: at eight, Alison was doubted, questioned, her version of the events suspect, and when her aunt told her that she didn’t think Kevin would do something like that, her mother, all those years ago, had agreed.

She got out of bed, carefully, in order not to disturb Jacob or the sleeping baby, rising from between them rigidly, straight-up, but also sort of clumsily, like a confused mummy, to go outside. Or was it like a vampire? She couldn’t remember which one rose stiff like a board from a coffin. She decided vampire. She went through the den, past all their books, and to the front door. She creaked it open and sat on a wrought iron chair. The moon sailed among summer clouds. The houses on the street were all quiet, some front porches lighted, some dark. She could let herself go out into the clouds if she wanted, she thought. She could forget about what she was thinking about if she allowed herself to – as her therapist had taught her to do, to see troubling events as events on an ever-receding movie screen, growing smaller, smaller, draining of color, until all that was left was the present world around her – but she didn’t feel like contriving. This was her problem: she understood that the possibility of feeling carefree was real, and yet whenever she tried to allow herself to feel carefree she was aware that she was allowing herself to feel carefree, thus lessening the feeling of feeling carefree. On top of that, she had endless responsibilities: her job, being a mother, not only to a growing child, but once again to a ten-month old: there were soccer games that she coached, Emma’s frustrations about fitting in, her talent for individual activities like pottery, rock climbing, and her feeling that she was failing among her peers, and then baby Connor, still not out of their bed, sleeping poorly, crankier than Emma was, sick often because of daycare, but at least he was taking the bottle more. Additionally, she had to be partner to Jacob, a friend to her friends, a good daughter to her own mother. And now this Kevin thing. She had to deal with all of that again. Some part of her longed for childhood again because she felt it was owed to her, those carefree years. She’d lost those years, or they were taken away, and she wanted what she saw her own daughter having: some kind of innocence. Though she hated the word innocence. But still, something like that. Her children, though Emma in particular, were purely what they were, wild and alive; she was not sure what she was anymore. For the past year or so – really since Connor had arrived, right in the middle of the pandemic, joy mixed with stress and fear – she couldn’t figure it out. She was a person who archived books and taught students about research, a person who was married to a man she cared for and loved, who she felt distant from and lonely with, connected to and seen – a typical life. Yet something was missing. Had it always been missing? Was she only now realizing it was missing? Or had Kevin made it go missing? But she didn’t want to assign blame to him. That was to give him power, she knew. Plus, she didn’t even know what it was that was missing. Maybe nothing was. It was as though there was the life she imagined she’d have and then there was her life, and the two looked similar outwardly, but so often lately it also seemed like none of it was real exactly. It felt as though it were a simulation. As though it lacked some animating process, that it was still the sketched idea of a film or TV show. It wasn’t that exactly, though. It was like she was on some long hike, going through a forest of rolling hills, and she thought that just over the next rise, she’d see it, the thing that would reveal what this whole thing was, but it never arrived, it was just hill after hill. 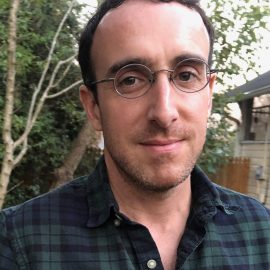 Alan Rossi is the author of Mountain Road, Late at Night, which was published by Picador in 2020. His novella, Did You Really Just Say That To Me?, was awarded the third annual New England Review Award for Emerging Writers. His second novel, Our Last Year, is forthcoming this autumn from Prototype in the UK …