There is a man sitting on a bench in the sun. He watches a woman on hot pink roller skates stumble around the tennis court beside the bench. He has just been fired from his job as a radiation physicist. He fixes radiation machines—or did, anyways. He recalibrated them to make sure they beamed the correct dosage into the correct parts of a patient’s body. Without him, the radiation machines could fry a patient from the inside out. Imagine it, a blistered sunburn on the inside of your skin. He was always so careful, so precise in his measurements, eyes aching to ensure every number lined up, every decimal checked out as he ran diagnostics on the radiation machines. He might not have been the person to deliver the radiation, that was the tech’s job, but in a way, he was still the difference between life or death. But the company he worked for is going under. They sacked the newer physicists one by one. Something about seniority, though he imagines that letting go of some of the older physicists would have saved more money—and jobs. The end had been coming for a while. Now, he wakes late. His wife makes him breakfast every morning. He reads the New York Times and goes for walks in the afternoon.

A man has just been fired from his job as a radiation physicist only a week ago. He came home in the middle of the day and found his wife watching soap operas and folding laundry in the bedroom and he thought to himself, “Jesus Christ.” She could have been doing anything—reading a book or taking a class at university or fucking the brains out of a lover. But no. She was folding underwear into neat, tidy squares, and tucking tubes of socks into drawers. His wife cried big, fat tears that stained his blue button up with mascara when he told her the news. 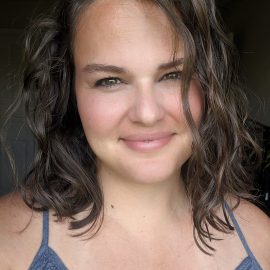 Macey Phillips’s short stories, reviews, essays, and flash fiction have appeared or are forthcoming in J Journal, WOSU, The Journal, The Pinch, the Under Review, The Broadkill Review, and elsewhere. She earned her B.A. in English from Ohio State University and recently graduated from OSU with her MFA in fiction, where she served as the …