My grandfather’s dying wish was for me to appear on the nationally renowned quiz show, Trivial? For the past couple weeks, they’d been advertising tryouts for the upcoming teen tournament. “Ben,” he said, “I need you to do this for me and your father.”

He was lying on what we’d assumed was his deathbed, a cot in the family room that had easy access to both the TV and the front porch. He was a smoker, a fact our family discussed as seldom as we discussed the developing world, and he thought he was dying. He told us as much but refused to go in for tests. “It’s like facing a firing squad,” he told me. “You don’t need to know which bullet kills you.”

I don’t know what he told my parents, but I believed him.

When his cough diminished, and his appetite returned, I suppose some of us were more surprised than others. Dr. Chuck, who went to church with us and finally made a house call, declared my grandfather as healthy as the president.

When Dr. Chuck left with a coffee cake, Grandpa grew serious and called me over to his bedside, into his cloud of VapoRub. “This doesn’t mean you’re off the hook,” he said.

Even before he got really sick, whenever we watched Trivial?—an almost daily ritual in our house—my grandfather would summon up a base level of theatrics that I found nearly as interesting as the show itself. He’d prop himself up on his cot in order to shout out irrational answers and berate the game’s mustached host whenever he lapsed into a phony accent or tried to push through a weak joke. It wasn’t my grandfather’s show. He was only there because he was a guest in his son-in-law’s house, and his son-in-law watched religiously, even when the show labored through special-interest tournaments for everyone from teachers to military veterans. Given his reduced mobility and diminished eyesight, Grandpa rarely left the house and therefore watched television incessantly, but it was the only show for which he roused himself—in large part, I realize now, because he could be sure of an audience.

Everything was a joke with my grandfather. On the rare occasions he still drove, it was usually because I needed to be ferried to and from a dentist appointment or retrieved after a rare invitation to a friend’s house. I seldom went anywhere interesting. As he drove us home, he would act lost, missing turns and ignoring my navigational pleas. I was too old for that sort of thing, but indulging him didn’t really cost me much, and I was always relieved when he broke character and steered us home. It proved to me he was still of sound mind, far enough from dementia that he was able to satirize it, even though his body was betraying him.

No matter how far we’d driven, we’d inevitably arrive home in time to find my father sitting straight-faced in front of the TV with his post-dinner can of Tab, waiting for the show. “You almost missed it,” he’d say, and he’d rise from his chair to get his popcorn, as though he’d been saving bleacher seats at a ball game and was only now free to move about or use the restroom.

Perhaps it was the routine that my father liked, the consistency of the same show coming on every night, the same host dressed in the same palette of masculine blues and telegenic neutrals, but I think it was something more. He was an electrician, a man of good intention and criminally modest ambition. He’d been an apprentice, never a student of formal education. The show was forever trying to trumpet the democratic nature of the competition through awkward, mid-round banter, in which the host descended on each of the contestants in turn, forcing them to share travel mishaps, celebrity encounters, or offbeat hobbies as though everyone watching was dying to hear about it. My father never missed this part, and he took special interest, I could tell, in what their occupations were. There was real allure for him in testing his mettle against professors, stockbrokers, or engineers.  Once, when a former astronaut went on the show and didn’t qualify for the final round because his score was too low, my father casually brought it up weeks later, as though he’d been thinking about it ever since.

“You should do it,” my father said when I told him about Grandpa’s request. “I think you might learn a lot.”

These were, of course, my own words coming back to haunt me. I knew this was the rhetorical appeal to which my father was most vulnerable. I would often ask to go places—to concerts, to movies, to the beach—under the guise of education. “They’re poets,” I’d say and proceed to tell him how a band’s lyrics had been lifted from obscure Native American poetry. To his credit, I don’t think he ever quite believed me, but my mother was usually on my side. She wanted me to get out and experience the world. She was uncomfortable with me being around the house too much, and after he moved in, with me being around Grandpa too often.

My father signed me up, and even though my mother disapproved of the show—she often ran the blender during the nightly airing of Trivial?—she thought it would be a good experience. “When I was young,” she said, “I wanted to be on Star Search, but I was never encouraged.”

Neither was quite correct.

The room was full of a half dozen kids my age or so. They all seemed like they knew each other, and for a moment, I felt like I’d stumbled into a clubhouse. There didn’t seem to be any adults present.

“This is my fifth time,” a boy along the wall said. He wore a cardigan and glasses and drank from a Styrofoam cup. “I don’t know what I did wrong last time, but I’m hoping the sixth time’s a charm.”

A boy listening to the cardigan boy wore similar clothes and also had a Styrofoam cup. He chewed on his, teeth marks visible all around the cup’s rim.

“What are you drinking?” I asked.

They looked up at me but said nothing. I moved to a coat rack in the corner and took off my jacket. It was hand-me-down from my father. It wasn’t something I normally thought about, but the rack was full of pea coats. I crossed the room and looked at a table they’d set up for food. There was a punch bowl full of sodas and ice, a tray with cookie crumbs, and a coffee maker.

“Sorry, I took the last of the coffee,” a girl said. She looked normal.

I left the table alone and sat on one of the folding chairs near the door. The others continued talking. I recognized a few of them from school; social misfits of the sort that delighted in routine office supplies, pencil sharpeners, and staplers. They were the sort that, instead of asking questions when they raised their hands, attempted to add factoids at the end of a teacher’s lecture. “And did you know,” they’d say and launch into a boring anecdote that would make us all late to our next class.

Truth was, I didn’t mind the factoids, but I was never going to say so.

To read the rest of this story, please purchase a copy of issue #11, which will be released in July 2021. Photo courtesy of Santi Villamarin; view more of his work on Flickr. 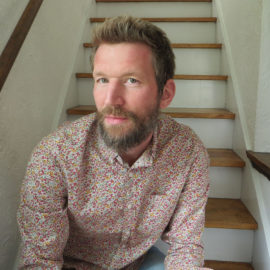 Tim Conrad’s fiction has appeared in journals such as Quarterly West, Willow Springs, Quarter After Eight, and Natural Bridge, and it has won awards from the Emrys Foundation and Beloit Fiction Journal. His story “The Machine We Trust & Other Stories”, was a finalist for the 2019 Spokane Prize from Willow Springs.  He attended a …