When I was a child, there was a monster under my bed. It was there when I was born, and when I was old enough to move from my mom’s bedroom to my own it moved in with me. I thought sometimes that together we took up too much room, but neither of us wanted to bother anyone about it.

When I was older, I felt a helium balloon pressing against the inside top of my forehead, lifting me lifting lifting until my bare toes drifted forward up off the ground, the knuckles bumping scraping your sidewalk for a minute and then taking away away. Not psychosis, or delusion; a new line drawn, a barely deviant perception of the world, everyone else’s universe running just alongside mine and almost close enough to touch. But I can’t lock on somehow, like a camera lens stuttering for focus.

Everyone else around you is in agreement about their world. They share it. I thought about the motivational posters in middle school classrooms with a stick figure or maybe tree in a vast, barren landscape — It’s okay to be different. Stand up for what you believe in, even if you’re standing alone. Shoot for the moon. I suppose the text pulls focus, but it’s an empty brown planet, and it goes on forever. Nobody lives there except you.

I could go, at first, longer stretches without thinking about it all. But gradually it found me, set me down on the ground in its paws. I’m too big a house to live in alone. And so panicked. In my room, because it would be unfair to bother anyone about it. I’d sit in the panic and follow wherever it took me and wait for it to dissipate, and it always does, so in some ways I’m not deeply hurt. But it never really leaves me. I don’t have anywhere to put it — even in your own room, people can still hear you. How could you ever be sure no one was listening? They would be so uncomfortable. And so I keep it, and it snags in my chest and festers until I have to excuse myself. Like being alone in absolute darkness, hearing all around you the noises of what’s about to attack you from an unknowable direction, paralyzed from your lungs to the ends of your hair.

I was in my twenties when the talk turned to mental illness. The diagnosis was vague, or it then mutated, or multiplied, and after I lost my health insurance I couldn’t ask any more people to decide what it was. But I took the medications, and soon they changed and multiplied too. I thought maybe they made things worse, though it was hard to tell sometimes. I had a lot of optimism, and I wondered why I had never tried to get help before. I could never remember. But I was fine, and I had always known I would be fine. I was not being destroyed for good.

I eventually stopped feeling but I remember first the intensified awareness of pain, mine or anyone’s, felt it physically like gravity, a downward tugging on my skin when I walked. How had I never noticed it before? The wrinkles were pulling me into the ground. I couldn’t bear the responsibility of anyone becoming bothered by it, and I saved us from discomfort and we tried to get along fine. When people walked too slowly in front of me I wanted them to die in a fire.

A few blocks from the house I grew up in, I had been walking in the middle of the street and there was a parade. I looked sideways through the crowd, the cacophony of people and pants, and there were so many of them and they were all so tall and all feeling and needing and being so many, so close, that I forgot which one was me. Was I over there? Or was I supposed to meet myself by the post office after I got apple cider. I stopped walking, and I looked down at my shoes, and I saw the feet they were attached to. I followed them up to my legs and my knees and that was the one that was me. I made a mental note of the process and memorized the flowers on my socks but for the rest of the day there was a man crying in the parking lot of the bank, and it didn’t seem fair that I couldn’t help be him, too. I cried for the monster that was there.

It’s an episodic pain, but explosive, amplified at its own discretion. It feeds on anything. I lose every bearing, like my body and soul have no edges. I blur into everything around me and there’s no stopping or starting, we’ve always been everywhere at the same time with no dam to keep me from spilling out into the rest of the world, like a person born without skin, uncontained, all tissues and fluids, vivid dreams and pressured thoughts, pooling out into the air and the parking lots and the neighbors and knowing that as long as somewhere someone has been in a car crash, or a dog is being kicked, that my ribs are breaking, too.

I saved descriptions I found of people stricken open — from Shakespeare, and Dante, and The Library Epitome. Men cleft, unseamed, ripped along the middle, and they all made sense, being as they were the outcome of a violent allegory, the kind of formula we’re attracted to in storytelling. None of the characters were ever children who grew up to find that their skin did not grow with them, only to reach adulthood half-naked, unfinished and raw, an exposed map of burning nerves that couldn’t bear to be touched. We don’t stop to ponder the unseamed Mohammed. There’s a reason he is the way he is, and so he has a place in the universe of the majority. He isn’t alone.

I need my reason, a point of logic from which to make my stand, to remember that as a child, there had never been anything under my bed. There was no monster waiting when I was born. It had come later, and it found all the gaps in my skin and burrowed into me like a parasite, and then it wrote itself into my history. It interrupts without warning, summoned by something trivial and small, to show me that all the trees have cancer and that no one will ever recognize the blistering on my chest. In the absence of grimmer weather, I can replay the afternoon I found my shoes in the parade and remember that no one actually cried in that story, and the parking lot was probably empty. I had gathered myself back in and memorized the flowers on my socks and nothing like it happened again for years. 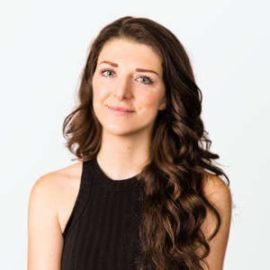 Kastalia Medrano is Filter’s deputy editor, the Travel Writer at Thrillist, and was on the Science team at Newsweek. Her freelance journalism has run at or is forthcoming in VICE, the Paris Review Daily, Teen Vogue, Pacific Standard, National Geographic, Time Magazine., Real Life, The Sun, Newsweek, and many others. She worked as an ASME …