The tram conductors will strike tomorrow—

Efren buttoned the top of his coat and

adjusted his scarf. With old men it is always politics or the past,

and usually they are the same.

as the door closed in the bar behind him.

He crossed to the other side of the canal. No matter how wide

the poseidon, he always knew how to get home.

For him, a city was a grid, carvings of our

wanderings and settlements, the layering of materials over materials

and the history of architecture, a city

and the borders between suburbs, states, countries

spokes in a ladder, oh yes, more like DNA

that you could crawl over.

he looked forward to the drawing of borders.

The significant events of history are usually working days

for people like Efren and he knew this before he started

so he can blame himself, only, really, for drinking

It began with Havel but mostly there were things

that maps didn’t show, the maps you get in school and the globes.

even after the tank and the boy. It was November

Efren should have waited, maybe,

but what joy to unite Germany inside

This was the time

of devolution, not the swallowing mouths

The wind hummed between his ear and collar. Efren

swiped it away. For a moment, he closed his eyes (a woman

in red biked past him, took a second look).

A month ago, there was champagne. Now,

he drank too much jenever, now,

he was no longer celebrating,

the crowds of the happy liberated smaller

and there were bombs.

The more there were, the more we could

or the more we could not.

Outside of the central library in Prague (two months

a prostitute who was trying to get to Holland. Word had spread

now that the wall was down.

In the dirt in the street, Efren traced Amsterdam for her.

Those are the canals. To get from one point

to another you follow the water. As long as you

for the train station, the opera house.

This is the Royal Museum

where they keep the Night Watch.

He took the prostitute for coffee and she tried to lead him home.

and they made love until eleven.

Does a mapmaker believe in revolution.

if he is to make maps or money. Of course

on his mail. A letter

from Sanam. He put her letter under his arm.

Desert came out of the crack near the seal.

Of course he believed

We are none of us independent

as you are not free of your ladder, the windows

you wash today and will wash again in May.

Efren ordered another round.

The foam slipped a long drip down the glass,

wetting the coaster. He watched it

then turned to his neighbor. You see

Because he must always begin again.

With each new map, longitude disclosed itself

a little more. He understood its test.

But it wasn’t the hunger of the Albanians,

the Tibetans, it wasn’t their hunger that intrigued him.

Borders made and broken

unknown to the natives, the wild, the trees.

but not as simple as the desert.

That is what he imagined,

still on his skin. People

*Originally published in Tears in the Fence (UK), 2006 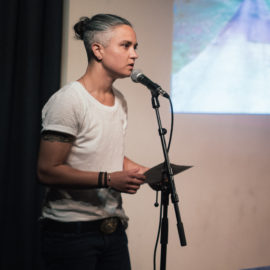 Megan M. Garr is a poet and the founder of the literary & arts journal Versal. She is the author of two books of poetry: Terrane (MIEL, 2015) and The Preservationist Documents (Pilot Books, 2012). Her writings on inequalities in the literary world and its economy have been published in several anthologies, including Literary Publishing in the …