I’m not a violent person, but I do have a fantasy of punching him in the face. Last I heard, he still lives in New York, where I have recently returned after a decade away. In my fantasy, I run into him on the sidewalk or the subway and land a good right hand to the nose, from the side, so he won’t see it coming. Bam. Then I turn on my heels, rub my stinging knuckles, and walk away, fixed.

To my friends and family, this might seem out of character; I was never a mean one. In elementary school, all my heart-shaped Valentine’s contained the word “nice.” I had no trouble abiding by one of the earliest rules taught to little girls: Don’t hit. Use your words. Whenever kids would fight in middle and high school, I would retreat from the spectacle and press my fingers to my ears to block out the chanting, “Fight! Fight! Fight!”

But that’s all behind me, I’d like to think. I’m a tough one now.

It happened almost two years ago, when I was twenty-five and nearly finished with my first year of graduate school, on a trip with an old friend to Mexico City. We’d gone on trips before, but never out of the country. This time, he had a girlfriend (supposedly) back in Brooklyn. On the first night, over dinner, we spoke about the #MeToo movement and I clinked my glass to his when he told me, “Men need to do better.” After dinner, we departed to separate bedrooms and went to sleep. On the second night, after a day of walking and an early night at a local concert, he drugged and assaulted me back at the apartment before returning to his separate bedroom. When I finally got myself out of the bed sometime later, I banged on his door, shouted his name in a burst of anger and found it locked. He wouldn’t answer. In the silence, my anger became fear as I realized he didn’t anticipate my conscious recollection. My fear became paranoia; I thought he might try to kill me. I left with nothing but my cell phone and some money, then wandered the neighborhood streets in the early dawn for several dazed hours before calling my sister. With the help of her friends and the embassy, I found myself on an expediated flight home. He sent me one text that morning—“How are you?”—to which I never responded. I haven’t heard from him since. The whole thing is still unbelievable and inexplicable to me, and though I’ve read enough rape narratives to know I might be expected to try right here and make sense of what happened, I’m not interested in doing so. I choose, for now, to decline the childhood command; I don’t want to use my words. I’d rather punch.

I began preparing for the punch the summer after, when I found a local boxing gym in Vinton, Virginia, nestled in the back corner of a jumbo gray sporting complex behind a strip mall. Not the group fitness, feel good, modified-kickboxing type of venue, but a train-to-fight one-room gym with four heavy bags hanging from ceiling rafters and a blue-bottomed ring in the middle. Instead of a welcome desk, there was an old wooden table buried beneath a pyramid of worn gloves, shed like abandoned snail shells next to a tangled rainbow pile of hand wraps. My first day there, I hung by this stinking pile for long, nerve-wracking minutes. Unnoticed, I watched the men and boys across the room, tattooed and strong, their mumbled small talk punctured by electric bell timers and the pounding pop of leather on leather.

“How much is it to rent some gloves?” I asked the first person who met my eyes—one of the old-timers, I’d later learn, a lightweight born-again Christian with a mean left hook.

He didn’t answer and instead brought me over to the other side of the room, where a wide-shouldered man in a baseball cap was throwing a medicine ball at a teenager mid-crunch. “Hands up!” he shouted, chucking the thirty-five-pound ball at the scrawny boy’s face. I flinched as the boy caught it. Then the man turned, mouth frowning beneath his black mustache, his bright, hooded eyes serious. “Let me guess,” he said. “142.”

“What?” I asked. He led me to a scale, positioned prominently beneath the timing bell, and weighed me. He was right, 142 pounds. My shock outweighed my embarrassment, which would dissipate too, as I discovered the rules of the gym, where weight was as malleable and public as one’s hairstyle.

“I’ve been doing this too long,” he said proudly, then gave me another stern stare and extended his giant hand. “You here to work?”

I was. The man was Maynard Quesenberry, called “Coach” by young and old fighters alike. A former state champion and postmaster with truck driver, double-digit, knock-out knuckles. All my fears shrank away when I shook Coach’s big hand. The price to work out at the gym was five bucks a night or forty a month unlimited (thirty for EMS, veterans, firefighters, or police officers). But Coach wasn’t in it for the money. He once received an envelope of two hundred dollars slipped under the gym door from a boy who had showed up years earlier without a dollar in his wallet. Coach had bought him new gloves, trained him for two months, and never once asked for a penny. He’s that kind of guy. Each month, he’d organize group trips to a prison fifty miles south, where one of the former trainers was serving his sentence.

The gym could move, and its members moved with it, all following Coach, though he’d never admit it. “Good people here,” he’d say. “I don’t know where they all came from.”

There were veterans, Golden Gloves champs, MMA fighters, and boys trying to beat a bully. Half were trainers themselves—self-declared or hired, it wasn’t quite clear—but they offered boxing advice freely, and practically for free.

To read the rest of this essay, please purchase a copy of issue #8. Photo courtesy of jpellgen; view more of his work on Flickr. 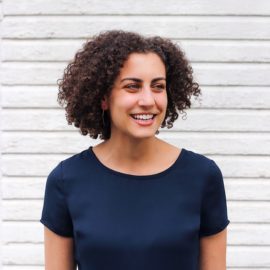 Lucy Marcus is the author of a chapbook, Dandelion Wishes. She was selected through a competitive process by RIDE Solutions, the Roanoke City Arts Commission, and the Greater Roanoke Transit Company to be the 2019 Writer by Bus and read from her chapbook, which was written and developed as a result of her time with …