Robert Mende pulled the plug on his marriage not with a violent jerk, but in spurts; it may not have added up to much of anything at first, Mende was nothing if not scrupulous; he kept at it, and after a good year and a half of solid effort his wife was thinking of divorce.

They are in a cab now, both of them, he scowling, she unreadable. The cab is laboring up a hill. The hill is in Pristina, the incline steep. The car goes from side to side as the driver (Milos) swerves around potholes as large as bathtubs; though, more often than not, avoiding one pothole immediately lands him in an even bigger one.

They decided on Pristina for entirely private reasons; on her part, because she liked the idea (romanticized it even) of being in this formerly war- ravaged place at this stage in their lives, of showing him how something beautiful (or at least lasting) in fact could grow from a cancer; he, on the other hand, because of a subtle difference in his understanding of Pristina; for him this trip was, as he put it, “more about Milosevic and less about Clinton;” without the cancer itself, so his reasoning went, nothing further in the way of development would have been possible. He had to sleep with Eliza, thus. And with Millie, and with Anita. Had to sleep with all of them to save their marriage.

He was never an attractive man, Robert Mende, never popular with the ladies; a man, by his own admission, of “books, not looks”. And though he joked about this not infrequently himself, it took him until his fifty-third year to truly realize the depth of his misery. “What a joke I am,” he said to himself one day; and having said it aloud, he knew that it was true. Mende was stunned. “I’m a joke,” he repeated. It was enough to bring him to his knees. How deep the chasm had grown since college (not that he had been an Adonis then) that divided him from the anointed now! From those men who entered advanced age as if they had been waiting for it their whole lives; who were transformed when they turned fifty-one, taking on a sort of halo; rewarded for their graying hair with an animal magnetism; those men (Mende spotted them on the subway, in cafes, and yes, on a few humiliating occasions among his faculty colleagues, too) who stepped down from the late-forties plateau onto their fifties as full-fledged dinosaurs.

It was this reptileness more than anything else that Mende longed for, that he wanted for himself and that he spent hours each day thinking about how to acquire and always, always coming up empty.

They crest the hill. The cab groans. Milos swears. They have a view of Pristina down below (much grayness, much sameness); then they are hurtling towards it.

His first attempts were spirited; no one could deny Mende his enthusiasm. But he was also inexpert and clumsy. It is doubtful that any of the women he approached in those first few weeks even knew he had singled them out for the purpose of seduction. And the man of the hour himself? He returned home from these mostly imaginary infidelities full of remorse and reeking of guilt. But he pushed on nonetheless, telling himself all sorts of things: the meek will not inherit the earth, and so forth.

And if that was bad already, imagine the act itself! Mende had been at his game for a whole six months when it happened. Her name was Eliza; she was taller than his wife by far, and younger (ten, twelve years at least, he guessed). More beautiful, too, with long hair, a slim, athletic body. A knockout. It was a harrowing experience for Mende: the peeling of clothes from an unfamiliar body, the sudden foreignness of his own movements, the awkward fumbling; more than once, he fought the urge to abscond.

Now, right this minute, with the city centre in sight: Laura turns her head. “I can still see you, you know.”

“We’re in this place, a thousand miles away, and I can still see you with her.”

The crowd is too thick here. Milos stops the car. They get out, stand there, Milos looking about restlessly, Laura with her head held high and sort of aristocratic, Mende near tears. “You were never meant to see us,” he wants to tell her. He turns around, but doesn’t see her anymore.

A week later, they fly back. Milos drives them to the airport. Stepping into the plane, Mende happens to glance to the left, where the cockpit door is open, and where the pilot is watching him from reptilian eyes. 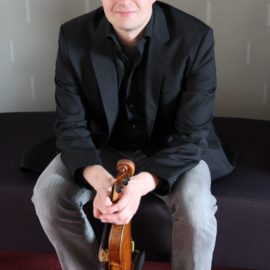 Mika Seifert’s short stories have appeared in the Southern Review, Antioch Review, London Magazine, and several other publications. His story “The Intervention” was listed as a notable story in the Best American Nonrequired Reading 2014. He lives in Germany, where he is at work on his debut novel and a collection of short stories. Beginning …