Augusto and Paul stood on a front lawn in a cloud of basement odors, searching through old things. They loved a sale. Augusto ran his fingers over the wrinkled spines of horror novels and mysteries, and Paul wanted dishware from his grandmother’s heyday, if he could find it. The sun burned Augusto’s scalp, but he wouldn’t wear a hat, no matter how much Paul begged. “You don’t want to admit you’re losing your hair,” Paul told him. Augusto resembled a little leaguer when he wore a hat. He hated the heat and wanted to evaporate into a mist. On the other hand, Paul came alive in the summer: he wanted to be outside, to be walking, exploring new places. He wanted to have sex more often. To make him happy, Augusto sweated through his shirts and carried a gallon of water wherever they went.

Augusto spotted the green coat folded on a card table the moment he and Paul stepped out of the car. Rare to find a piece of clothing at a yard sale that wasn’t shit. He touched the wool, and in the heat, it made sweat ooze all over Augusto’s body. It felt wrong to buy a wool coat in the dead of summer, but he paid a woman sitting in a lawn chair ten bucks and knew he’d pulled a fast one on her.

“It’s totally designer!” Paul said in the car, though neither of them found a label. Augusto didn’t care about clothes, really. He figured Paul would take ownership of the coat, and he did. When they got home, Paul tried it on and flipped up the collar.

To Augusto, he looked like a soldier just returned, a stranger he wanted to unpeel. Paul wasn’t Paul, not the person he’d known for ten years. “You look good,” he said, and put his hands under the coat and touched Paul’s humid body. The first time he ever touched Paul, he had started to shake, which had never happened to him before, and he knew it was his body telling him a secret, and it told him the secret again now. Relief always washed over him lately when Paul aroused him, because of the years behind them, and the other people they’d been with, the temptations. Paul’s interesting, bony face was at home between the collar of the coat, and Augusto wanted to touch it, to kiss him right away. Remember how beautiful he is?

“Take it off,” Augusto said.

Paul took off the coat and Augusto put it inside a garment bag in the closet and knotted the end to keep it safe until winter. They showered together, but there wasn’t enough room to have sex in the cramped stall. When they got out, Augusto knelt in front of Paul, who kept shifting against the sink. Soldier, soldier, soldier, Augusto thought.

Paul shook his head and flour fell out. Early mornings, he apprenticed under a baker at a local bread shop, making dough and loading ovens. When he got home, Augusto had already left for his job at the University and Paul savored the time alone before his second job at the bookstore. They lived in a long and dark apartment, with small attic windows and a slanted ceiling. An air conditioner worked hard to keep the place bearable.

He set the alarm for one hour, took off his clothes and fell onto the cotton sheets, and woke soon after, thinking he’d fallen asleep on a great mound of rising bread dough. He got up and took the green coat out of the closet and put it on, then stood in front of the sink and washed the dishes.

The coat’s silk lining clung to his naked torso. Nice to be alone with silk on your skin. He hadn’t thought about putting the coat on before going to the closet and taking it out of the bag Augusto had put it in. He hadn’t imagined wearing it until the winter, but yesterday, he’d put it on and a charge of new confidence vibrated through him, and another feeling he had trouble identifying. He’d enjoyed the way Augusto looked at him. He owned nothing as luxurious as this. He and Augusto has plucked most of their furniture from the side of the road or bought it at the Goodwill. His clothes were the same clothes he’d worn for years. He stacked the dishes on the counter, went into the hall, and knocked on the door of the neighboring apartment.

Teddy didn’t seem to notice the coat when he opened the door. But that was Teddy. If Paul had appeared in a werewolf costume, Teddy would have helped him remove the head without comment. Over the years, undergrads came and went from the apartment. He and Augusto preferred Teddy to the others because he was queer and quiet. Paul appreciated the silence the most. Teddy never disturbed his reading time. Augusto liked him because he was majoring in psychology, just as Augusto had. He didn’t remind them of other college students in town. At night, Paul heard glass breaking in the street and the shouts of drunk young men. Teddy would never be caught among them. He was nerdy, introverted, only adventurous within four walls.

To read this story, please subscribe to our print edition or purchase a copy of Issue #12. Photo courtesy of Ysbrand Cosijn; view more of his work on Shutterstock. 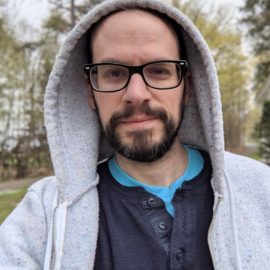