His right eyelid was like an apricot pulp forgotten in the sun too long, its once inviting color long faded. My parents wanted me to call him khalo, but khalo meant uncle, and uncle was familiar, yet this man wasn’t familiar to me at all. Though he and my mother shared the same thick, ebony hair, my uncle’s was shorn of any volume and nearly all gray. He was younger than my mother. The only gray in her hair crept evenly from the part line of her crown and would soon disappear after her next salon appointment.

It was hard to imagine my uncle Ziyad as a young boy, running after my mother, wanting to be included in her games with the other neighborhood kids in Nur Shams, the refugee camp where they were born. Twenty years ago, my mother had fled the sewage stench and corrugated tin roofs when she married my father, a thriving liquor store owner in Roseland. He would build her a house far from that violent neighborhood in a suburb full of other arrab who’d never have to go back to curfews and black-outs and days of eating stale khubuz because you couldn’t get to the baker for fresh bread when the Israelis put up roadblocks, dissecting the camp like vital organs, in search of militants. These details emerged from my mother’s former life when she chastised my laziness or discovered I’d thrown away half a slice of frozen pizza in the kitchen trash bin, and such stories dampened my adolescent defiance, and guilt tingled in my spine.

When my uncle was released from Israel’s Nafha prison, he lived a while in Portugal with some distant relatives whose grandparents had fled there during the 1948 occupation and remained for three generations. When my parents had finally arranged for my uncle’s visit to the U.S., my mother had cried for a whole week as she cleaned our split-level house and cooked, ordering me to clean out the basement and help her tidy our spare bedroom, a space which had housed all of my childhood memorabilia in black-markered storage boxes.

“I’m sure you’ll find the best arrabi food here,” my father assured my uncle. “Though still not as delicious as your sister’s cooking.” He winked at my mother and playfully mussed my hair until I flicked his hand away.

“Baba, quit it!” I told him, sullen about having to spend another evening home as guests continued filing in and out of our house to welcome my uncle Ziyad and stake a weekend for a grand dinner at their homes in honor of his long overdue arrival.

“I doubt anything made from my sister’s hands is not the best quality,” my uncle Ziyad said, his voice soft and his words unhurried.

“Tomorrow we’ll drive into the city, show you all the extraordinary sights Chicago has to offer,” my father proudly announced, sounding as though he’d been born in this country and in this very city when he’d been here merely five years before he brought my mother from overseas to join him, leaving behind my grandparents and other uncles and aunts and first and second cousins who I was not likely to ever meet.

Tonight at our house, more men arrived in pressed slacks and heavy sweaters, and some wore crisp white dress shirts. Khalo Ziyad appeared smaller than them, lodged between two heavyset men. He was the only one wearing jeans, a pair tinged yellow and with frayed bottoms, the same pair that he’d been wearing the day he arrived at O’Hare International Airport and that my mother had immediately washed for him. She’d set out a pair of my father’s flannel pants that he’d lounge in on weekends when he wasn’t at his liquor store. My father had given my uncle Ziyad a sports jacket, hoping he’d look more presentable, but the jacket swallowed up his torso and thin arms, and he looked like a boy wearing his father’s suit for a pageant at school.

In our kitchen, the women busied themselves with small plates of ikras sabanagh—tangy spinach pies—and baklawa, layers of golden pastry soaked in syrup. They prepared several pots of coffee—both American and the thick Turkish kind that lined the bottom of my mother’s fancy demitasse cups with blackish-brown sediment. They talked over and past each other, pinching each other’s arms in affectionate replies and giggling like young girls again. Their voices rose in crescendos yet never seemed to descend. I felt a warmth in their unfettered exuberance as I wiped down the countertop until I realized how futile it was while the women continued to serve coffee, then tea, honey-colored liquid splattering onto the speckled granite.

I finally just sat on a kitchen stool and watched the turning leaves cling to the branches of a maple tree in our yard. A few snapped away and floated to the damp ground. In a few weeks, the fallen leaves would be buried in the first layer of snow. I wondered if my uncle Ziyad had ever seen snow and how he’d need a decent coat if he were to brave his first Illinois winter. From my vantage point, I could see my uncle Ziyad’s profile, his good eye to me until he turned and caught me staring. He gave me a small nod and turned back to the men’s whooping conversations.

My father began his amateur tour guide of the city at the Midway Plaisance. It was a pretty boring stretch of autumn-browned lawn. The dilapidated houses with broken sidewalks kept my father from actually stopping the car and letting my uncle Ziyad take a walk down the Midway where sideshows and vendors had set up during the 1893 World’s Fair.

“And the Arabs stayed,” my father was telling him. “Those arrabi merchants worked hard and lived the American Dream. Al hilm al amarkani,” he added for effect.

I noticed my mother didn’t say much when my father dominated the conversation. She let her brother sit in front, and she took my hand in her lap and caressed it as she stared out the window of the car, nodding to no one in particular.

We drove north on Lake Shore Drive, and Lake Michigan looked gray but lovely. A few sailboats bobbed in the distance, and joggers in shorts and earmuffs ran in both directions alongside the lake.

“We’ll save Navy Pier for this evening,” my father said. “Ziyad, we’ll get the fireworks tonight.” He reached over and patted his brother-in-law’s shoulder.

My uncle Ziyad didn’t say much, just turning to look in the direction my father pointed. I couldn’t tell if he was completely unimpressed or overwhelmed. I’d discovered he was like a breakwall against which the waves of Lake Michigan crashed but never penetrated. It made me wonder what he thought of us, our house in a neat suburb, the city, and everything that made us distinctly separate and safe from whatever he had experienced in that prison.

My father finally parked the car off Chestnut and Rush Street, and we walked east to Michigan Avenue. We walked past women in high-heeled boots and dark sunglasses, their necks lost in layers of woolen scarves. It was easy to distinguish the natives from the tourists: European men and women, fit and tanned, their children wearing designer sneakers and wind-breakers; the diminutive Asians in large groups of families and friends, following a leader with a poised camera; and, finally, the suburbanites like us who both reveled in the city and were glad that we could easily leave all its noise, glass-paneled skyscrapers, and homeless folks, retreating to our quiet and neatly manufactured neighborhoods.

I tried imagining it through uncle Ziyad’s eyes. Was he impressed? My mother locked one arm through my father’s, and they walked ahead of me and my uncle. When we arrived at the old Water Tower, my father began his effusive tour-guide script again.

“Imagine, Ziyad, that only 140 years ago, this was one of a few buildings left standing after The Big Chicago Fire,” my father declared.

“The Great Chicago Fire, Baba,” I corrected him. “Not Big.”

“Yes, yes. The Great Chicago Fire,” he said. “Anyhow, the point is that Chicagoans didn’t let anything stop their progress in the modern world.”

For the first time, my uncle Ziyad’s interest appeared piqued. “Who started the fire?” he asked. His pulpy eyelid slightly lifted to reveal an undamaged pupil.

My father smiled widely, encouraged by his brother-in-law’s inquiry. “It’s a funny story,” he began. “A baqarra—a cow, wallahi—had knocked over a lamp in a barn.”

“Baba, that was never proven,” I interjected. I’m not sure what compelled me to challenge my father, but I continued, drawing from a history lesson last year when my class was studying Chicago architecture in AP Art. “In fact, that woman was publicly exonerated of any wrongdoing.” And, suddenly, other details surfaced like I’d tapped a spring in my brain. “She and other Irish people were harassed for a long time when it wasn’t even her fault. Miss Vernon—my art teacher—said it was a terrible time for Irish people in this city when they were already being discriminated against as immigrants.”

My uncle Ziyad seemed to be listening intently. He wanted to know all that the fire had destroyed, how many people had perished and had been displaced. He wasn’t interested in how the city was rebuilt or its progress since the blaze. But my father continued to steer the conversation back to the wonder of structures like the Water Tower and what came after the fire—a newly imagined city with the world’s first skyscrapers—all of the tales of ambition and vision that real tour-guides extolled to their eager-eyed patrons.

And yet my uncle Ziyad had stopped listening again. He walked ahead of us and stared at the bronze plaque mounted on one side of the pale bricks of the Water Tower, commemorating its architect. His shoulders were stooped, and he did not blend in with the other tourists who huddled around the plaque and snapped photos.

And I finally understood. Those houses were wooden, turned to ash, no traces left so that the city could begin again, improvise, go in a new a direction. The houses in my mother and uncle’s refugee camp that the Israelis fired rockets into were made of cinderblock that barely disintegrated in fire, which could only gut their interiors, leaving behind ghastly skeletons with thick charred wires. 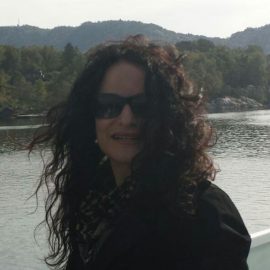 Sahar Mustafah is the author of the story collection Code of the West and the forthcoming novel The Beauty of Your Face. She is a Palestinian American writer, editor, and teacher from Chicago. Her work has appeared in American Fiction, Midwestern Gothic, Great Lakes Review, Word Riot, Flyleaf, Hypertext Magazine, Mizna, and Hair Trigger, among many others. …