In Alma and Manda’s trim white farmhouse, it was a wonder the border of Swedish Christmas plates didn’t fly off the walls as Manda stormed through the preparation of their afternoon coffee. Alma sat at the kitchen table, oblivious to her sister clattering the flowered cups and saucers. Her mind was so occupied, it didn’t occur to her she was doing nothing to help, though in the two segments of time they’d lived together — before and after Ezra — setting the table had always been Alma’s job. This had been the case since she was four, when their mother died and Manda stepped in to do the best she could with Alma’s raising, and it made Manda furious that in one afternoon things had come so undone her sister was not up to even this task. The fool old thing simply sat there, looking around the kitchen as if seeing it for the first time. A little smile, a little sigh, a little shudder, Manda wasn’t sure if Alma was breaking or mending.

Manda piled more cookies on the plate than they needed, the only thing she could think to do in the face of this eighty-two-year-old woman whose behavior she barely recognized. Something tangled at her throat. She set the cookies on the table hard enough that Alma startled.

“I don’t know how in the Sam Hill you got on that bus in the first place,” Manda said.

Alma studied the cookies. Finally, she selected one from near the bottom.

“A FUNBUS of all things,” Manda said. “Alma! A bunch of drunks.”

That she’d joined an outing with men from a bar, no matter how accidental, was a topic Alma knew couldn’t be avoided. She pressed the cookie against her lower lip. When she pulled it away, the cinnamon was still there, a light dusting of nutty brown that brought out a different color in her mouth.

“Wipe your face,” Manda said, and her hands shook as she snapped the lid on the cookie tin. “You look like a tramp.”

“That man, Alma,” Manda said. “How did you take up with that awful man?”

“Jonas,” Alma said, and inside she smiled.

The tin felt heavy in Manda’s hands. It made her voice louder. “Jonas? Jonas what?”

Alma sighed; her sister couldn’t help herself. She looked anywhere but Manda.

Manda slammed the tin on the counter, then moved around the kitchen like one of their clucker hens, threatened at the nest. After all these years, Alma wondered how she hadn’t seen it before. Manda’s elbows tucked and untucked, and something interesting and rather frightening happened with her eyes. Right ways and wrong ways. As though Manda was saying it out loud. Not only Manda but the whole flock. Ezra, the ladies in Circle. Everyone always so sure. But Jonas Johannsen had been a perfectly nice man, even if a bit drunk. Alma took a bite. I love cookies, she thought. And I am not a tramp.

For a moment, she was surrounded by the morning’s yellow sunflower mist. The woman. Her touch. “Alma!” she heard Manda say, here in their kitchen, the sharp urgency interrupting her memory.

Alma turned her gaze to her sister, “Perhaps I look like a Gypsy?”

Manda’s dress seemed to lift from her body. Her tight curls, released that morning in preparation for Circle, furied around her head like the Elm Grove ladies every time they had to read what again turned out to be this month’s Bible Study, the story of Martha and Mary.

Manda leaned her hands on the table’s polished red surface and glared hard at her sister. “Of course you don’t LOOK LIKE A GYPSY!” Her chest rose and settled as she took one deep breath, then another. “First you get on a Funbus headed to Anamoose, their sole mission to visit another bar, then you don’t get right back off, then you go and faint smack in the middle of some Catholic folderol. And now–” Manda sank into her chair, put both hands around her cup for calm. She shook her head. “From Larimore to that church was forty minutes, Alma,” she said, quieter and more gently. “Tell me how.”

“Mother.” Alma returned the nibbled cookie to her nose. It left a dab of sugar where her nose turned up slightly to the sky. “She came out of the sunflowers.”

Manda’s eyes were wide, but Alma closed hers to breathe in the cinnamon and the memory. Her mother had told her she was beautiful.

“She was a Gypsy,” she said. “Manda, why ever were we so hateful afraid of them?”

“Alma Eriksson,” Manda yelled. “Have you had a stroke?”

The two women faced each other, the teapot clock above the stove ticking out the seconds, until, in the face of Manda’s terror and fury, the dreaminess that surrounded Alma since the sunflowers began to shrink and fade. What was this strange day about? What did it mean to have done the best you could? She put her cookie on the rose petal saucer and brushed the sugar from her nose.

The bus driver pulled the handle with a sigh, and a crying, tiny, wrinkle-faced woman, fresh-pressed and powdery smelling, climbed up the steps and wandered blindly down the aisle. It was the only thing unexpected enough to cause the old man to move his Fritos from the seat next to him into his lap.

“How do,” he said, as she sank beside him. “Welcome to the belly of the whale.”

Alma came to. She looked around, past the black vinyl seats, the worn reddish carpet, the steady rumble of voices, until her eyes reached the white-haired man in the seat next to her. “Where am I?” she said.

Her thumb stroked the straps of her purse as she looked around the bus again. Tears still wetted the wrinkles that curved under her eyes and down her cheeks. A fresh one squeezed out to follow the others, and he pulled a handkerchief from his pocket and tucked it between her fingers. 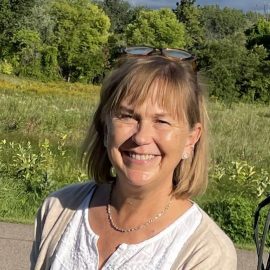 Amy Payne’s writing journey has been circuitous. In a college creative writing workshop with a famous human, she decided that she herself had no imagination. Over a decade later, when she chose to leave a life of planes and corporate stuff, she discovered bits of writing she’d evidently been creating all along. In those fragments, …