Sometimes Gordon and me hang out in the apartment in our Stormtrooper armor. We play cards or watch TV or drink beer, the same things you’d do in your street clothes, but we do them in full gear. Except for helmets—it’s about 300 degrees inside those things, and we’re not looking to kill ourselves. On my days off we usually suit up in the early afternoon, then kick back on the couch and clack up against ourselves and each other for the rest of the day. It’s not the most comfortable thing in the world—you can hardly cross your legs, for one—but it adds a sense of purpose to your free time, makes you feel like you’ve got plans, like maybe something important is about to happen, and you’re already suited up and ready to roll. Stomping into the kitchen for a fresh can of Pringles, I feel like I could conquer the universe.

I work five days a week at Goin’ Postal in the South County mall. Gordon’s between jobs. Gordon’s between pretty much everything, as far as I can tell. He says he doesn’t put on his gear on days when I’m not home, doesn’t sit around in it by himself, but I’m not sure I believe him. He says sometimes he polishes his blaster or goes after a scuff on his armor with the Wite-Out, but that’s it. His armor is ancient and pretty beat up, like he’s been taking part in galactic warfare since the old Sith Empire. Some guys like the battle-worn look—hell, sometimes I add scuffs to my armor, so I don’t look so much like a new recruit—but Gordon likes his look pristine.

Gordon and I belong to the 501st Legion, South St. Louis chapter, an elite Star Wars villain costuming organization that marches in parades, appears at fairs and cons, and visits hospitals. We cheer up sick kids by tromping through the halls in formation and visiting them in their rooms, letting them touch our blasters and hold our thermal detonators and whatnot. It’s how I met Gordon, how six months ago I finally moved out of my parents’ basement and into the second bedroom in Gordon’s apartment in Dogtown. Before I joined the Legion, I had been a fan for sure, but it wasn’t like I lived and breathed SW every second of the day, not like Gordon and the rest of the guys. I was just looking for something to do, something I didn’t hate, maybe a way to make a few friends that weren’t the people I’d partied with in high school. Our squad works out of a shop called Galaxy, a sci-fi book, comic, and collectible store that I started hanging out in last year. The owner of Galaxy, a big muscular ex-Marine named Paul, started the chapter a few years back, hoping it would bring in more customers. Paul is always Vader. The day before this summer’s massive July 4th parade his appendix burst and instead of having a replacement Vader, we were just a garrison of leaderless Stormtroopers. I mean, it is Paul’s store, and he’s the one who does all the organizing and sets up our events and visits, so I guess it’s only fair. Plus, he has the attire, the real thing, the real real thing, one of a dozen or so Vaders that were made for Return of the Jedi which Paul bought (story goes) with money he got from the government when somebody rolled a live grenade at him during a training exercise at Camp Pendleton and blew off his leg at the knee. When he strides into a hospital room, that flowing black robe concealing his limp, the kids sometimes cry because they’re so excited.

We visit St. Louis Children’s Hospital two Saturdays a month. There are eight of us Stormtroopers, plus Vader. We drive over from Galaxy in Paul’s black cargo van—he calls it the dreadnaught—then pile out the back into the hospital parking lot while people take pictures of us with their phones. We don’t open the hatch until every one of us has his helmet on and all weapons are fully secured. That’s one of the by-laws of our chapter; you may not be seen in public partially armored. My first time at the hospital I got overheated and took off my helmet coming down in the elevator and Paul went full Vader on me. Your disrespect for the Empire has been noted, he said through his comm system. I wanted to laugh, but honestly, my heart was pounding so hard under my chest plate that part of me must have believed he might really strike me down.

Most of the guys in the squad are middle-aged, original trilogy guys, with basement displays of unboxed action figures. I’m the youngest, and Gordon’s probably the oldest. He’s never told me exactly how old he is. His face is creased and splotchy and his hair is nothing but dirty blond wisps, so to just look at his head—which sometimes I do, because his body’s encased in his trooper armor—you might say he was past sixty. But he’s got the body of a fourteen-year-old boy, squirrely and long with those tight, bulgy little muscles. I once saw him climb from the sidewalk to our third story apartment window in about twelve seconds. We were locked out, and I swear scaling that fire escape he looked like he had six legs. I don’t know what he did before I met him, but I know he’s lived in the same apartment for at least ten years and has had stints at just about every auto shop in the greater St. Louis area, most recently at the Kingshighway Jiffy Lube where he was fired a few months back for stealing a Gilmore Girls DVD collection out of a customer’s mini-van. Some of the other guys in the squad think Gordon is crazy, because he regularly pops off at people for no reason, and sometimes he swipes stuff, random stuff—like books you know he won’t read, or a pair of shoes that’s too small for him. But I live with the guy, have for half a year, and I don’t think he’s any crazier than anyone else I’ve come across; I just think he doesn’t try to hide it.

To read this story, please purchase a copy of issue #10 or subscribe to the magazine. Photo courtesy of Michael Nye. That’s right, the editor of this very magazine! Be excellent by ordering a copy of his new story collection, Until We Have Faces. 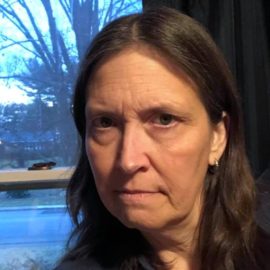 Susan Perabo is the author of four books, most recently The Fall of Lisa Bellow (2017). from Simon & Schuster. Her other work includes a second novel, The Broken Places, and her two collections of short stories, Who I Was Supposed to Be and Why They Run the Way They Do. Who I Was Supposed …