The old dude calls from across the covered patio. “It’s the Alps. You are here for trout!” His Slovene accent dominates a cool breeze. He’s unshaven, but smiling and bright-eyed behind glasses with thick black frames, entirely clad in even blacker leather motorcycle garb, a helmet in the seat across from him as if it’s a dining companion. In one hand he holds a slender green paperback book which he shakes at us in a way that’s teacherly and menacing at once. Beyond him the pine-laced mountain pass leads to a distant canvass of elevation. “Trout,” he says again. Chaun and I have been torturing the waitress for a description of everything on the menu. I’m certain I’m getting the Three Meat plate. A safe choice. Plus, we are hungry and way off our intended route, and not on purpose. Chaun’s fault. It seems appropriate that this place is called Brunarica Slap, because that’s what I want to do to him. In two weeks, I’m downsized out of a job, a needed push, really, but with no prospects. Chaun insisted on this trip together anyway. Because, we are one after all, Chaun and Gabe. Known in our circle as Chaun and Beefy Gabe or, more often, just “Chaungabe.”  It could be my passport, or the innkeeper who greets us individually by our first names, but something about Slovenia has reminded me that I like hearing my name apart from Chaun’s.

But, here we are, sitting side by side at a table covered by a red and white checkered cloth, the restaurant’s only customers besides the old dude obsessed with our order. “The trout,” Chaun asks the waitress, “is it whole?” The old dude chuckles as the waitress nods. “I’d like it headless,” Chaun continues. More chuckling.

“I’m sorry,” the waitress says earnestly, clearly having addressed this question from tourists countless times. “We cannot do this.” She stands robust and upright in a white short- sleeved blouse and red apron tight around her waist. Chaun and I wait for an explanation, but none comes. Instead, she stares firmly at her pad, strong fingers keeping a pencil at the ready for a revised order. “Your decision?” she asks without looking up. I’m less bothered by the abruptness than her collective address, as if there were one decision to be made between the two of us.

More chuckling from our one-man audience who holds up two fingers and rattles off something in Slovene. Our waitress inspects us, then replies over her shoulder. Neither Chaun nor I speak the language, but when the man’s tone becomes insistent, if not loud, and she shrugs her shoulders, leaving our table, I know what’s happened. We’re having trout.

“Did that just—” Chaun begins, but he’s cut off by the old dude who approaches us with a beer and the helmet that holds his book.

“The Three Meat is good,” the old dude says, plopping himself down across from us, “but I’ve ordered for you the trout.” We begin to object, but the man raises a thick fingered hand and smiles broadly, small gaps between each tooth. “I know. How dare I impose,” he continues, puffing up his chest as if to mock his own bravado. “But it is what they are known for. My wife would slap my head for this. But as you see, she’s not here.”

There is something disarming in his honesty, and anyway, lost or not, it’s a perfect day to sit in this covered patio surrounded by trees, a golden oak ceiling gleaming above as if it were the sun itself, though not the sun of the Florida Keys I’d have preferred. Chaun and I look at each other, exchanging silent permission to accept this adventure however it turns out. We’ve come to Slovenia for our tenth anniversary, five married. Chaun is a photographer and political poet, part of a loose group of Chicago writers called Queer Riot. So, of course we’ve come to the land of the poets. This trip is a prelude to another, more important one. In five weeks, Chaun will visit his aging parents in Calgary. They know nothing about his poetry nor about me, which is why they are making one more try at matchmaking. Apparently, the unsuspecting woman is twenty-seven-years old and from a wealthy Hong Kong family just like Chaun’s parents were. I’ve insisted, at last, that at thirty-nine-years old, it’s time he tell them he’s gay and has a husband. He’s insisted that if he does, it will leave them childless and him without parents. “You have me,” I said. He didn’t reply but the silence sounded like “you’re not enough.” I’m almost okay with that.

“I’ll put some lettuce over the eyes or something,” Chaun says about the trout. “I went through an entire childhood staring at fish heads and that was plenty.”

“Yes, yes,” the man says, clapping his hands together. “You are Chinese. Of course!”

The man laughs. “I’ve been to America many times. I know about your obsession with hyphens. I am Slovene. And you?” He looks me up and down. “I’m guessing you are about five or six hyphens. Typical white American. Yes?”

“He’s got you pegged,” Chaun laughs.

If typical is graying scruff and a little extra weight, I am indeed pegged. I love Chaun, though he insists that I say this too often to him and declare it to too many people. Maybe I do this to remind myself that at first, he was the “hot Asian guy” at the gym my friends got tired of hearing about. I timed my workouts to what I figured were his. I’d enter the floor and look for his amazing shock of black hair and the crisply lined poison ivy tattoo trailing down from the back of his neck and into his tank top. I confessed to him on our fifth date that no matter where I was in my workout, if he finished and hit the showers, I was shortly behind. He rolled his eyes. “That’s hardly news,” he said. Occasionally he reminds me that was our fourth date, not the fifth, because the first time, he was standing at his car door in the gym parking lot, waiting for me. His hair was still damp, a black swoosh over one eye. We gave each other a chin-led ‘sup as I passed, and then I looked back and it was on. He lived just two blocks away. Afterward, we exchanged numbers in case, well, definitely not to get coffee.  Turns out you can hook up and get coffee.

To continue reading this story, please purchase a print copy of issue #8. Photo courtesy of Pedro Szekely; view more of his work on Flickr. 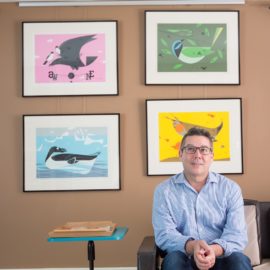 Brian Leung, author of All I Should Not Tell, Ivy vs. Dogg: With a Cast of Thousands!, World Famous Love Acts, Lost Men, and Take Me Home, is a past recipient of the Lambda Literary Outstanding Mid-Career Prize. Brian’s second novel, Take Me Home, earned a starred review in Kirkus Reviews. Other honors include the …