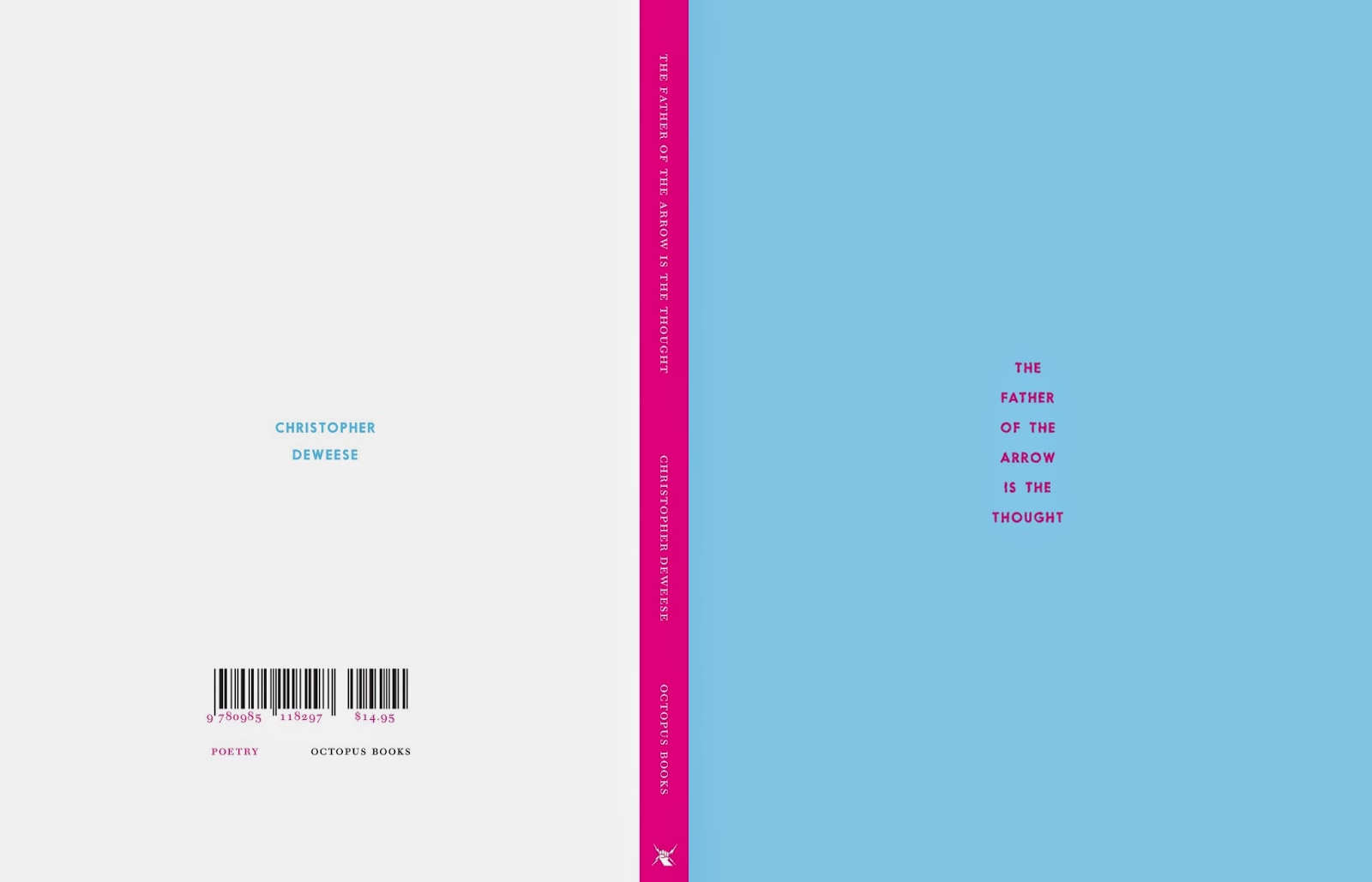 Artist Paul Klee said, “The father of the arrow is the thought: How do I expand my reach? Over this river? This lake? That mountain?”

Let’s analyze that, the metaphor, the metatheory, the meta—or, let’s not. Instead, let’s look at the work of Christopher DeWeese, a poet from Ohio whose recent collection reflects the same theories that Klee strived to understand. DeWeese’s new collection, The Father of the Arrow is the Thought, was published in 2015 by Octopus Books. Brightly bound in a sky-blue cover with hot-pink text, the book is 75 pages of philosophical rebounds, images of nature, and personal stories. For example, in his poem “The Hill” DeWeese writes:

I drag myself across the rainbow,

in the question of distance,

how many miles it is

between here and anything,

the horizon a cliff

all jump and floating,

hidden between my breathing

and the real sun stumbling

Here, DeWeese is handing us the grayscale photograph of transcendence. He is saying that humans are dropped and cemented onto an infinite timeline, a continuum moving with a velocity and directionality that we cannot predict. The humbling fact here is that human existence is terribly limited. We are allotted a tiny fraction of space and time to create dreams, pursue them, help others find their dreams, change our own dreams, and reach beyond them. That “rainbow” we always hope to cross has no end. Maybe humbling is not the right word; truly, this is terrifying.

I belong to the generation of millennials whose dreams sprawl beyond any rational judgment of their power. Mainly, we have little power, because we have little money, because we have student loans. We spend years living in the separate universe of college, parents still paying our speeding tickets and businessmen hired to interview us. Then—apocalypse—we move home, start paying $500 every month to Sallie Mae, realize we cannot afford Bud Light, much less an apartment, and we take part-time jobs that are not remotely related to our degrees. We become bums with major ambition.

Maybe we are just optimistic (but that ambition does not go away). We find ways to travel the world as cheaply as possible, by writing blogs or scrubbing boat decks. We love nature because nature is free. And, yes, we sleep on a cot in a hostel with twenty other people who do not speak our language, because we will not give up that dream.

This is the point I have reached in my own life. Admittedly, I’ve always been a sucker for snowy woods, deep seas, sunset cornfields. But I now have spent days researching how to “make a living hiking in Costa Rica” or how to “travel Spain before student loans sink in.” Essentially: I and many other millennials understand that the rainbow is finite. We understand on a very basic level that our minds transcend both our ability and time. DeWeese speaks from this understanding, only more eloquently than most.

In addition to his philosophical roots, many of DeWeese’s poems reflect personal experiences in and interactions with nature. His poem, “The Lake” reads:

I wanted to be the lake,

and not just in a meditative way.

How else to account for all the fish I swallowed.

His reasoning for wanting to be the lake is serious in the way a seven-year-old girl is serious about needing the newest Barbie for her birthday. His wife loved the lake; DeWeese described a moment when he caught his wife standing, admiring the majestic blue, and he could not help but be jealous. His poem grapples with both the tremendous respect and envy DeWeese felt for the body of water.

Other poems discuss moments of introspection while immersed in nature. DeWeese grew up in northwestern California, in a rather poor environment. For family vacations, his parents drove him and his brother to a campground in an old RV. There they would play a game his parents called “beat the ranger.” The family would wake before sunrise and leave the camp before the ranger made his rounds. And when DeWeese was older, he and his friends would spend nights camping in the woods, where he derived much of his poetic material.

Paul Klee noted about creativity that “art does not reproduce the visible; rather, it makes visible.” That is what DeWeese accomplished in The Father of the Arrow is the Thought. He claws into theories about existence and body/mind dualities while also sketching landscapes from his past. As a person who climbs flat rock faces just to get the best view of the waterfall, I fell head first into the language of DeWeese’s insight and imagery, just to climb back up, and dive again.

Kaila Young is an editorial assistant for Story and writer from York, Pennsylvania. She writes for Susquehanna Style magazine and is the co-editor of The York Review.