Michael leaned over the fence, breathed in the oil and rust of twenty motorcycles. Radiant chrome spokes glinted in the soft winter light. The bikes’ back ends pointed to the sky, seats were smooth or pocked or sagging, shafts were bent or fractured. Michael gazed at indiscriminate litter in the wide sideyard: motorcycles, shards of plywood, children’s red toys faded beige. Such a shame letting old motorcycles go to scrap, he thought. Just a little extra care and they’d be fine to ride, no danger at all. His hair was short now, a receding gray. Sometimes his back gave out, and at the worst possible moments. He pointed the camera over the fence, took video of the bikes, looking for a life he no longer had.

Around front, Michael rang the doorbell of the small vinyl-sided cape. Nothing. Again, he rang, nudged the door’s brass kick plate with his work boot. The door opened to reveal a frazzled Italian-looking woman with steel-gray hair. He recognized that bitter expression of loneliness, even in the presence of others. The woman reminded Michael of his wife, a projection of her future self. The woman at the door turned her head up and down the treeless street. Forlorn single-family homes stood near the highway. There with no children in sight. The pavement cracked in predictable patterns. Unruly azaleas encroached on the sidewalk.  A small patch of tomatoes near the driveway withered on the vine. At the intersection, a green pickup truck rolled through a stop sign. The woman in the doorway cursed the truck: Vaffanculo! Spittle dangled from her lips.

Michael stepped back. “I have cash this time.”

“They’re always running that stop sign.” She wiped her face with the back of her arm.

“I’m here for the bike? The ’95 Virago?” Michael hoped he looked hopeful. The woman stared at the concrete stoop, kicked loose bits with large sneakered feet. Thick blue veins snaked along the back of her knees under a large but too-small knit dress.

“I ought to call the police,” said the woman. She smacked her lips.

“What I ought to do,” said the woman.

“I’m going to give it to my son for his birthday,” said Michael. “He’s a nice young man.” The woman looked over Michael’s shoulder to the side yard where the bikes were heaped.

“I don’t like motorcycles,” she said. She gripped the shaky iron railing, turned to go inside.

“Listen,” said Michael. “I once rode one along the Mississippi River. After my wedding. We were happy then, wife and I. We were in love.” The woman stared at the welcome mat, then back at him. She breathed slowly, as if considering the meaning of the word love.

“Cafone,” she said. The woman’s old lips chewed and smacked, but there was nothing in her mouth. Michael caught a whiff of rotting meat. She didn’t look at him, just held her face there in the crack in space, gazing at something she couldn’t see.

He opened his wallet, fanned out a stack of bills. “These are hundreds. How many do you want?”

A gift for his son! Michael was pleased with the thought. His wife would be so surprised. She was always complaining that she had to do everything for the family, had to think of everything. That he was not holding up his end of the marriage in terms of what to think about or plan. What to purchase. A motorcycle for Peter! It was a wonderful gift, nothing that his wife would expect.

“Think what you can do with the money,” he said. “You can buy new siding for the house. You hate vinyl siding.”

“I’ve always hated vinyl siding.” The woman eyed the hollow beige planks by the door. Her eyebrows were thicker and wider than his wife’s. But no, my wife will not be old and bitter and possessed of varicose veins. She’ll not curse generous strangers or chew her own face.

“How about you look at things from my point of view for once?” she spat. “Try feeling what it’s like to inhabit my body. That won’t kill you, you know,” she said. Then she slammed the door.

Back in the truck, the radio played a lazy song. The beat matched the gaps in the concrete. When he was a young man, Michael rode his motorcycle all day long. He listened to the gaps in the concrete, a sort of metronome under his wheels. Riding relaxed him, made him feel free, open to possibilities. Driving was like a movie playing in his head, a boundless adventure, a diversion that made him feel alive. Next to him in the passenger seat was his old motorcycle helmet. There along the crown ran a through-and-through crack. Why on earth did he still keep it? To remind himself that he did not die that day.

At least, that’s what I think he thought.

I am on the fifth floor of the art museum with my childhood friend Julia, who I have not seen since her photograph was acquired. Julia’s been a photobug as long as I can remember. She started out with a point-and-shoot, pasting the pictures in scrapbooks with pithy, incongruent titles. You can use words to create anxiety, Julia said. The image says one thing and the words are wrong for it. That’s what she likes to do, has always liked to do.

Once, Julia took a photograph of me standing in the gutter after a tornado-infested storm had gone through, brown storm water draining down the street and into the cast iron grate which led to the lakes. We were wearing one-piece bathing suits. Mine was bright orange and hers was rainbow, though she wasn’t in the photo. I was eleven, posing, kicking at the rushing stream in the street so that a perfect wave of water lifted up towards her lens. The Poetic Resistance Creates New Forms or Dies were the words she lavender-inked in her scrapbook. She framed the page in simple chrome and gave it to me for when I got engaged.

To read this story, please subscribe to our print edition or purchase a copy of Issue #12. Photo courtesy of Kaponia Aliaksei; view more of her work on Shutterstock. 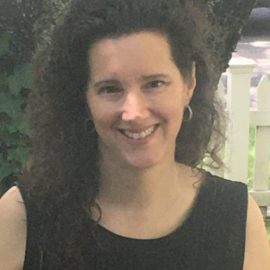