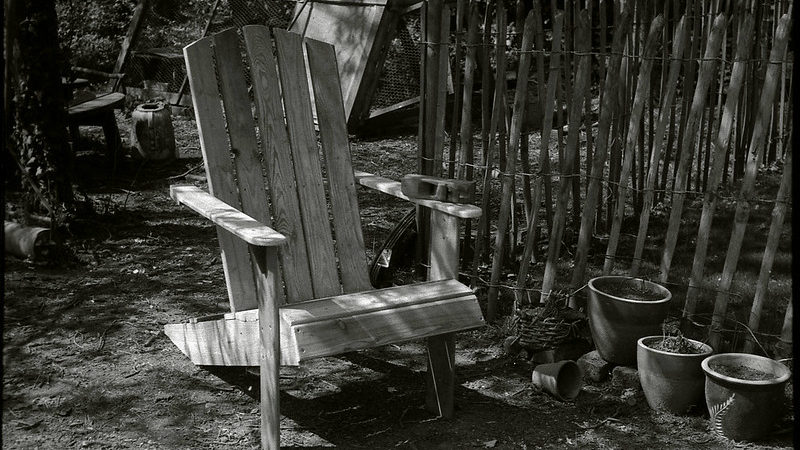 The chair is light blue but shades toward gray in the sun. China blue but more somber, more delicate. It’s an Adirondack chair, which are common in New England, but when she first saw it, she found it unique, unusual, a splendid wedding gift.

They married right after she graduated. She was twenty-two and Morty was twenty-nine. The gifts their friends and families bestowed upon them were staid and correct: towels, saucepans, a basic china set. But after the ceremony, Richard—bearded, his hair shaggy as an undergrad’s—told them if they wanted their present they’d have to come over to his house. They’d not planned a honeymoon, so they went the next day. At the front door Richard asked them to meet him at the garage. He lifted its door from the inside and there, on the concrete: sun illuminated its wooden back, its wide arms. It looked like a minimalist throne. She hadn’t suspected Morty’s peer was so gifted in carpentry. She reached on tiptoe to kiss his cheek. Morty shook Richard’s hand and said he was lucky to count Richard as a friend.

Morty accepting the position in Vermont had given Richard the idea. He’d been once as a kid and remembered loving these simple, stark chairs: no cushioning and yet comfortable, perfect for reading a book in on a nice day. The paint color, too, was part of the gift. Richard knew Morty’s full name—Mortimer—translated roughly from the French to mean dead sea. He didn’t know what a dead sea looked like but had imagined it pale. Then Richard flushed, and Cappie thought he worried he’d too baldly admitted his affection for Morty, a thing men always struggle with. “I’d meant for there to be two chairs. But the semester flew by.” He glanced toward the house—she imagined toward his study, to the blue-book exams stacked on his desk.

“This is the most thoughtful gift we’ve received,” she said. “We love it.”

Richard invited them in. He and his wife, Tabitha, had a small cottage in Cayuga Heights. Cappie loved this tree-lined neighborhood, the quiet houses tucked back amid oaks and elms. Morty lived north of campus in a brick apartment complex populated mostly by graduate students. Her first two years she’d lived in Mary Donlon Hall; her junior and senior years, with a few girlfriends, she’d rented a seedy apartment on East Seneca near Collegetown. Tabitha suggested lemonade on the back patio and a game of bridge. The backyard was thick with sunlight, which, as Cappie wore a sundress, warmed her collar bone and shoulders. Tabitha had put mint leaves in the pitcher of lemonade; they floated on the surface. She poured them all glasses as Richard found a pack of playing cards. Morty and Richard discussed how their students had done this semester. Tabitha told Cappie the wedding had been beautiful. Cappie thanked her, although she was privately relieved the day was over. They’d been married on campus, in Sage Chapel, gothic and rich with its apse window and vaulted ceilings, its gleaming brass lamps and mosaic designs. At the last moment, her mother had volunteered the nondenominational church displeased her. The crypts holding the college’s founders were distasteful. The space was remote, overly ornate. All this, Cappie had felt, was implicit criticism of Morty, with his imperiousness and academic prowess. Buried even further down was jealousy: her daughter—easily, without drama or strife—had fallen in love and would spend her life with a successful man. So many, too, had borne witness: it had made the wedding seem a performance rather than a ceremonial joining. It had lacked intimacy.

That morning her parents had driven back to Ohio. Her more distant family had similarly dispersed. Morty’s parents had returned to Albany. This afternoon was the first time she felt properly married. They could do as they chose, together.

Hemlocks threw shade across the grass. She sipped lemonade, tart and icy. The day was so warm and tranquil.

“What a good friend he is to you,” she said to Morty later that evening.

“We came in together,” he said. They’d both been hired when they were just twenty-seven, straight from getting their PhDs. “It bonds a fellow.”

Now that she’s ordered the hospital bed, she hopes to let the moniker go. She deliberately spent a mint to ensure what arrives will not be ugly or sad, and can pass reasonably as furniture. She’s tried calling it a day bed—though that’s not what it is—but so far Morty hasn’t deferred to this mild form of erasure. Increasingly, maneuvering the stairs has been difficult for him. Then, last week, he fell. Her heart went so fast to see him in tears and wheezing, because to cry was to increase the labor of drawing a breath.

A broken ankle that will mend. And chronic bronchitis, the doctor said, badly inflamed bronchial tubes. The doctor did not say dementia, but she’s started to become anxious. He doesn’t remember where things are, which means he spends more time in his agonized lumbers throughout the house. He’s also begun to lose track of time, surprised when she tells him dinner is ready or she’s about to leave for her job at the library. There’s also his surprising decision to want the hospital/day bed in the sunroom. When she questioned his choice, he quickly delineated the ways this was, in fact, pragmatic. The sunroom is right off the kitchen and closer to the downstairs bathroom than the study at the hall’s end.

Of course, the study is barely farther away from the bathroom. And she brings him all his meals, so his time in the kitchen is minimal. The study is carpeted. It’s warm. Instead, he’s choosing a room half made of glass, with slick tiled floors. And particularly now in January, when the landscape is all ice and snow, he seems deliberately to have chosen an inhospitable space.

They’re considering the sunroom now. She has some wicker chairs in there, a low sofa with natural fibers, a glass-topped table. The Adirondack chair sits in a corner. Weather in Vermont is so fickle, even in its nicest months, and she decided decades ago she’d prefer to keep the chair inside, where the rain and humidity can’t get at it. The room is long, if narrow, and she could move the furniture to the far end so Morty’s bed isn’t crowded. Although that might look a jumble. She asks what he wants.

“Let’s move most of the furniture,” Morty says. “But I think just get rid of the chair.”

“The chair Richard made us? I’ll put it in the garage for the time being.”

“That will clutter up the garage.” Morty’s foot is in a cast. He leans on crutches. She bought him several pairs of cheap loose-fitting pants and cut the right pantleg from the knee down so he can still be in trousers. Not getting dressed, he said, made him feel like an invalid.

“Then I’ll put it in one of the upstairs bedrooms. It’s no trouble.”

“You can’t carry it up the stairs.”

“Of course, I can.” She worries they’re treading into unsafe conversational territory. He’s weakened in ways she is not.

To read the rest of this story, please purchase a copy of issue #11, which will be released in July 2021. Photo courtesy of Gauthier V.; view more of their work on Flickr. 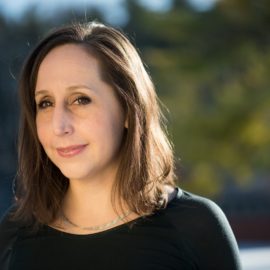 Janice Obuchowski’s debut story collection, The Woods, was the 2022 winner of the John Simmons Short Fiction Prize in the Iowa Short Fiction Award Series. It is set to be released in November 2022 by the University of Iowa Press. She received an  Emerging Artist Award in literature from the St. Botolph Club Foundation of …