He receives the body on a Tuesday. It isn’t the delivery that surprises him, but the way the body has been deposited on the porch in a zippered black bag bound on either end by a loop of duct tape, just left there in the middle of the day, on a weekday when he was at work and the children at school. His twelve-year-old son takes the bus to school and lives the afternoon life of what was once known as a “latchkey kid.” The bus brings him home at 2:42 in the afternoon, and the boy lets himself into the house, as a rule, through the back door, which opens onto the kitchen, rarely if ever through the front, where the body had been left, so it was possible his son hadn’t even seen the bag; or if he did, mistook it for a carpet ordered online, which is what Harrison himself thinks when, after pulling into the driveway on that evening, having retrieved his younger daughter from her afterschool tae kwon do activities, he approaches the porch with keys in hand to find the large zippered bag—waxy black, like a heavy-duty liner for a very large trash receptacle.

“What’s that?” asks his daughter, still dressed in the white uniform with the orange belt cinching the waist.

He has bent down to inspect the label, but the label can’t tell him anything useful. Yes, it is addressed to him (not to one of the children, not to a neighbor). But the return address, in Idaho, begins with an acronym—“JLI”—the larger verbal components of which are a total mystery.

Whoever sent it, the sending is not what he can’t understand. What he can’t understand is how do you leave something like this sitting on someone’s porch in the middle of the day, leave it there and walk away, go on, as if you’re leaving nothing more than a package not requiring a signature.

Two years earlier, they had adopted some kind of hound, rescued from a kill shelter, small, black, size of a young lamb, apparent runt of the litter—and roughly six months into the relationship, Harrison kicked it in the snout so hard that its lower jaw came unhinged. (It had been digging holes again in the back yard.) How would he explain what had happened to the protruding part of the dog’s skull without telling the truth? In one version, he owned a gun and solved the problem by shooting the dog in the head and then transporting the corpse to the woods north of town. This solution was later rejected as too psychopathically violent. After all, the kick in the snout had not been premeditated, nor did he feel remorseless about it afterwards. More to the point, the gun had been deleted, so there was no way to shoot the dog, short of borrowing a gun from someone who did own one, like his legitimately psychopathic (not to mention, suicidal) brother-in-law. In a later version, after kicking the dog and dislocating its jaw—it was yelping pathetically, begging in dog-speak to be put out of its misery (this episode seemed, in some distant corner of the dog’s memory, to have happened before)—Harrison managed to get the dog into the rear of the hatchback and drive it to the animal hospital, where he explained tearfully to the veterinarians that he had been leash-walking the dog along the side of the road, well within the white line demarcating the shoulder, when the dog went after a squirrel and lunged over the white line just as a pickup truck passed them too close, and what happened was, the front fender of the truck . . . all this with the dog yelping from the hole of its throat and one of the vets trying to stick a calming needle in it and two other dogs in the waiting room going berserk while their masters tried to keep them still and quiet them down and avert their eyes from the horror. This also was expunged. He was not a coward, after all. He was not meant to be someone who did terrible things only to hide them. In fact, it was even briefly considered that, after driving the dog to the vet having kicked its face half off, he would own up to what he had done, resulting (as he knew his decision would) in a criminal charge of animal cruelty.

In the end, none of these eventualities come to pass. Because, in the final draft, the dog is written out completely.

They adopt a cat instead.

To read the rest of this story, please purchase a print copy of Story #6, Autumn 2019. Photo courtesy of murfomurf; view more of their work on Flickr 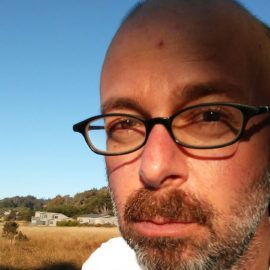 Greg Hrbek is the author of the novel Not on Fire, but Burning, a New York Times Book Review Editors Choice, and an NPR Best Book of the Year. His first novel, The Hindenburg Crashes Nightly, was awarded the James Jones First Novel Award and his first collection of stories, Destroy All Monsters, won the …