Lindy is running. Lindy is the only girl running. If she looked at the stands she would see the fathers waiting for their boys to return to the track. But she isn’t looking to the stands, she is looking ahead and only ahead. Wind pulsing in her hair, stomach knotted, a furious energy coiling in her legs and her arms. Some days Lindy runs and feels like she is not even touching the ground, like she is hardly a part of this earth; this is not one of those days but it’s still a good feeling. One step and another. Braid knocking against her neck. Three thousand meters and with each round of the track she wills herself a beat faster. A second off this lap, a second off this one. Lindy is the greatest sixteen-year-old female runner her school has ever seen and maybe the greatest they will ever see, though none of them are looking. She finishes in 10:14, shakes her hands, drops to the football field and hugs her knees a moment. Sometimes her body forgets itself after she runs, overcome by a panicked urge to pee, and it’s a minute before she stands, crosses the track, steps beneath the metal bleachers to stretch.

Mr. Price finds her there in a butterfly. “Your uncle called,” he says. “They’ve taken your sister to the hospital for her surgery.” He squats next to Lindy, opens his arms for her. “Remember it’s a blessing, Lindy.”

She leans into his shoulder, just a minute. She leaves a damp stain on his black jacket. “It’s okay,” she tells him, “she’ll be okay.” But then she stands, tells Mr. Price she needs to go, shakes her arms and cracks her neck. Above them the men are cheering, stomping their feet, shouting for their sons.

All Lindy wants is to silence her brain, occupy herself with the solemn noises of her own breath. She runs on the grass verge around the parking lot, hands tight and flat as blades, sun bleeding into her eyes. It’s under two miles home if she goes left, but she turns right from the school, past the peach orchards and the farm stand, past a field of mournful sweet-eyed cows. She can’t quite coordinate the beat of her breath with her feet but still there’s a pleasure to having a body, to having sight, smell, all of it. Her mouth is lined with sandpaper by the time she reaches home. She pauses to stretch her Achilles, hanging her heels from the front steps.

Her mother and grandmother are side by side on the sofa when she flicks on the light. They hold hands, their faces flat and blank as ever.

“You need something to eat?” Lindy asks. Her mother nods and she retrieves two nutrition pouches from the kitchen, breaks their seals and presses them into their hands. A half a blue Gatorade is in the refrigerator, which she takes to her and Maggie’s room.

It’ll be two or three days before Maggie returns home without her face: all the expressions of her younger self hidden away, eyes gone to disks of flesh. She stares at the ceiling, marked by yellowing stars they stuck there as children. The sun has darkened and slipped away, revealing the artificial glow of stars, before her mother knocks on the door. She sits on Lindy’s bed, reaches to her and touches her stomach.

Her mother rubs her stomach, fingers resting a moment at her hip as though she wants to pinch for fat.

“What time did it start?” Lindy asks.

Her mother holds up two fingers. Lindy tries to recall Maggie’s schedule—it would have been during art class, she thinks.

“I’ll pick up her projects and stuff from school tomorrow.”

Her mother shrugs. Lindy leans into her side, tries to settle against her the way she did when she was smaller. Her mother squeezes her waist again.

“I’ll make pasta. I’ll eat.” She follows her to the kitchen, puts a pot of water on the stove, opens a jar of sauce and pours some in a bowl to microwave. They sit in the living room while Lindy eats, her grandmother with her head cocked to listen to the news. Nothing of note is happening in the world. Lindy is now the last woman in her family with a face. They are waiting for her, she knows, they are waiting for her day.

A month earlier the principal sent a letter to Lindy’s home, saying how the school wasn’t equipped to teach her. She could finish her junior year but as a senior would be uncomfortable and out of place, the only girl in a room of boys he termed young men. “You understand how confusing it would be for the young men to be with a girl of her expressive possibilities,” he ended the note. At the start of the year, when she was cut from the track team, her father told her if she insisted on her presence they would have to accept her. “There’s no rule against it,” he said, “you’re within all the regulations.” He was right that time; she is still running, but he had no suggestion regarding this second letter.

The day after Maggie’s surgery Lindy sits through her classes, runs alongside the boys’ track practice, and then empties her sister’s locker into her bookbag. A cut lock lays on the linoleum floor; inside the door are photographs of square-jawed movie stars backed by pink wads of chewed gum. She arranges it all in her bag, the last markers of her sister’s childhood, and waits for the late bus to take her home.

Most of the track team is also waiting, and a few boys from the orchestra. A sophomore girl, Mildred, sits on the bench chewing skin from around her thumbnail. Lindy walks up and down the sidewalk until the bus arrives, avoiding Mildred’s bench. “She’s home early!” her father says when Lindy walks through the door. He pulls her to her bedroom. “You’ll keep an eye on her tonight.”

Maggie lays on her back, her arms above the covers. She becomes more perfect as Lindy steps close: her hair is tucked behind her ears, her skin is flushed pink, her eyelids opalescent above the faint swell of her socket fillers. She makes a whistling noise when she breathes through the slight part of her lips. An “X” of black tape covers a gauze bandage at her neck, where her voice was cut. “They were able to donate her corneas to a young man,” her father says. “It all went smoothly.”

Lindy nods and turns off the light, closes the door. “I’ll do my homework in the living room,” she says. “So I don’t bother her.” She walks ahead of him, opens her book on her lap and stares at the dense text on the rise of trench warfare. The TV plays, her mother and grandmother sit across from her, she blinks at the page and tries to imagine what it will be to have all this knowledge stored up in her and nowhere to place it. It pulses away, she guesses, like blood draining from a wound: one day it will be gone and she won’t even have noticed. She turns the page every few minutes until it’s time for bed, and then she lays on her side and watches Maggie’s still face in the occasional flashes of headlights.

To continue reading this story, please purchase a print copy of issue #8. Photo courtesy of nchenga; view more of their work on Flickr. 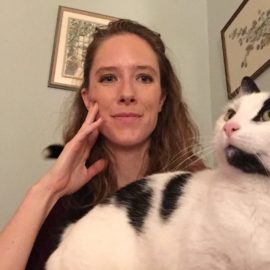 Ellen Rhudy is the author of Escape Velocity, a collection of short stories which explores how women can live in and free themselves from worlds designed to limit their agency. Her fiction has appeared in Northwest Review, The Adroit Journal, Cream City Review, SmokeLong Quarterly, Necessary Fiction, Monkeybicycle, Uncharted Magazine, and elsewhere. Her flash fiction …