When I was young—nineteen, twenty—and home for an indeterminate stretch, feeling aimless and lost, I met Renee, who carried a parasol to protect her pale skin and who, she told me, was looking for a hat like the ones the Vietnamese wore. Renee was a delicate girl, frail, red-haired, with a perpetual look of dissatisfaction and an antique Victorian birdcage that took up a good deal of one of the cavernous rooms of the apartment she rented—psychically if not otherwise, because while the rooms were large, the cage managed somehow to be larger. The cage was ornate and haunting. It stood in the center of the room, not hung but resting on a low stand. You felt, immediately upon seeing the cage’s swooping iron bell, that a green bird who was much loved by his owner had lived there once, and that the bird had sung a song you’d pay to hear.

Renee wasn’t pretty, exactly, but she, too, was haunting. She had a way of addressing you with a bored intimacy that excused her from the need for warmth by suggesting you and she were past all that, and that to act otherwise would be gauche. Her features—more, her carriage, her air—had a sharpness and a gravity that belonged to a long-past age. She might have stepped out of a locket. She was twenty-six, and married. She wore no diamond engagement ring, just a plain pale band that was too loose on her slender finger. White gold, she explained. That was why it looked silver.

I met Renee after dropping out of Amherst College and beginning a slow, directionless drift punctuated by stops at home to see my father, who was ill, and to save money. My friend Becky introduced us. Renee came into the bakery where Becky and I were having lunch, stopped by our table and recommended the Bundt cake. Her long red hair was looped up and pinned, and she wore a red striped vest that would have looked ridiculous on anyone else but on her looked jaunty. Genteel, actually—as if she were a rebellious Southern girl from the forties who drank bourbon and knew how to hunt. At Becky’s introduction, Renee nodded politely, then ignored me. She had a fretful, preoccupied air, and she didn’t stay long. If I’d had to guess, I wouldn’t have thought she’d remember my name.

Shortly after we met, I ran into Renee on Main Street. It was the late afternoon of a warm spring day, and Renee was walking along, her face tilted up, admiring the buildings’ upper stories. She seemed captivated by them. That was a sign that she wasn’t, as we said, from around here, as was her slightly aggressive way of grabbing your arm, as she did mine when she saw me. “Oh!” she said, her voice conveying surprise that managed to be knowing, “I was just thinking about you.” She slipped her arm through mine, and I fell into step with her.

I was on my way to drop my resume at a temp agency that closed at four, and my first feeling was unease, because I didn’t want to end up one of those retail girls who made a career of working in shops until it was too late to do anything else, and all of a sudden were middle-aged and trapped in a low-paying job in their hometown, and this was the first step: missing the temp agency’s hours.

“Come see what I found,” she said.

I considered telling her I was late, but her face had a quixotic charm, like that of a little girl who has discovered what she believes to be a fairy dwelling, and the pressure of her hand on my arm was like a rudder. I felt powerless to tell her no.

She steered me to a side street, where an iron railing began. The railing, overgrown with vines, ran down a slope alongside a narrow flight of stairs that stopped, I assumed, at the back door of an apartment building. Stores flanked the stairs’ cement landing—a pharmacy on one side, a used bookstore named The Book Cellar on the other. From the street, the dense foliage obscured the stairs’ descending steps, but they were obvious from the place on the sidewalk, at their mouth, where we stood.

She began down the stairs. I followed her, and saw she was right. The stairs themselves were made of wood, and vines curled around them. I walked cautiously, because the wood planks seemed rotted, but she moved quickly. At the apartment building’s back entrance, she stopped and waited for me. The stairs, I saw as I approached her, took a turn around the building and continued down. She took the next flight rapidly, too, and I saw that it led to the street below, emerging by the municipal transit building.

I descended slowly. Renee was waiting for me at the bottom of the stairs, flushed and triumphant.

To continue reading this story, please purchase a print copy of issue #8. Photo courtesy of li pan; view more of their work on Flickr. 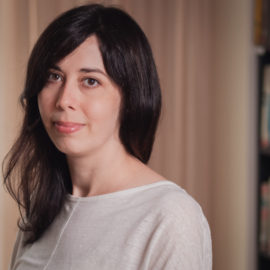