How can we speak the same language, having two
separate tongues? I wonder what you thought of us,
all audience and cowardice. You saw your mother
bombed and I saw my father bombed. The same dream
whispered the Gardens of Eden never were. A fever
checks the room., considering whom to inhabit. Your
home sprung to rubble. At night I leave my car running
as self-defense. A woman turns to me and says, about
whatever, “It has been especially severe this year.”
You are all bone and hand. The audience: plenty
of theories to calm the nerves. Rage? discontinued. You
seem almost a sweet, obedient child. One who might
sleep till noon when the brain is vulnerable. Where
do we find such traumatic rhetoric? Still shivering in
the dark, the thought of leaving our pets…the thought
is the same as abandoning them. Then dawn arrives
inauspiciously, astral, with her exiled arrangements in
the center of town, tossing marigolds at schoolchildren.
The school is now a surgical house. The audience
desperately searches for “a way to make it.” God’s
army, they’re just kids. I’d like to see them with their
sisters, going to the movies. “Innocence has devastated
us all,” reads one of the men. You would rather have
a clean sidewalk, leaves, to walk in their wake. I
remember: she was fixing breakfast and she was a
beautiful person and my eyes’ smoke probably filled the
room and I likely drifted into a deep sleep and never
knew there was a fire like pretty Russian lace shawls.
It’s such a shame, you might say to me: “You’re such
an easy pretty one to these habits.” 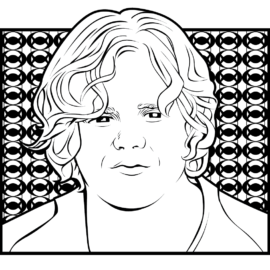 Jeremy Lespi received his PhD at the Center for Writers and taught in the English Department of the University of Alabama until his death in 2007. His chapbook The Last Day of Pompeii was published by Dicey Books in 2003.