She was at the grocery store in Morgantown when it happened—like shock from electric wire, or a suddenly caved-in roof. She’d been down every aisle with a near-empty cart, looking for the kind of beans with black in the middle (the kind Leonard would eat without his complaining; without pushing off his plate buttered limas or Great Northerns or the pintos she’d salt and pour from the can; without dropping his fork and lighting a cigarette instead, saying soft and kind of mumbled, in a way she could barely hear, “out of all the beans in that God-forsaken place”).

Like the newspaper on their porch, delivered sopping wet. Like how quickly milk can spoil. Or Imelda—their neighbor, three houses down—with that collection in her yard of metal-painted chickens.

In the store, things were organized dried-goods-to-wet. But still, she kept going: aisle after aisle. There were discounts marked with little stickers. A woman at the register with purple hair. Overhead, through the speakers, was an ad for insurance—policies named like Olympic medals. The station playing was out of Nashville (one she knew, from her father), and the man was acting as if these plans would run out. Like they were cheap gasoline. He was saying that he refused to ever leave his house without one—the universe, how it was. That he would sooner take a bullet than live his life without insurance.

But it wasn’t the ad, really. It wasn’t anything about policies or Olympic-medal plans. About gasoline or the universe or walking around on earth. It was nothing about the thought of how a bullet feels expanding that made her leave the store completely, abandoning her cart—next to this long glass-case display of meat cut in pieces, wet shades of pink.

What got her was the old man. The way his voice shook. The unbalance of him, like rocks down a hill. She could hear the cracks she when he spoke of that bullet—and this thought she had of the man waking up: his beeping alarm and him putting on his socks. Him hunting for coffee and half-lost in the kitchen. It was him deciding on orange juice because it was easy because looking for the coffee made his life feel dragged down. This man with a band-aid tight on his thumb, not a thing in his briefcase but a wad of receipts. She imagined him driving and missing his turn twice. Being scared (the way he was) to move over a lane. And him sitting in the wrong one, even turning off his blinker, not wanting to force an issue so here and in-the-flesh. It was the decision he made to wear something nice even though he knew how radio worked.

Thinking about it now, it doesn’t feel like the same day. The same week. These cars they’re passing, the length of this road—she’s starting to think that the world’s on its side. Like someone else entirely had left the grocery that morning and seen Leonard in the yard, his motorcycle in pieces. Had only waved. Like someone had opened this door to her brain, climbed inside and started pulling levers. Had made her pack a bag with only one change of clothes, and a silver tube of lipstick. And a picture of her father. And a mug off the dresser—with these musical notes that said EVERYONE’S WELCOME AT THE GREAT SMOKEY MOUNTAINS.

“You want one?” Homer says, reaching out his hand. He’s bouncing on the bench seat and offering his pack.

To read this story, please subscribe to our print edition or purchase a copy of issue #12. Photo courtesy of Matthew Yonker; view more of his work on Shutterstock. 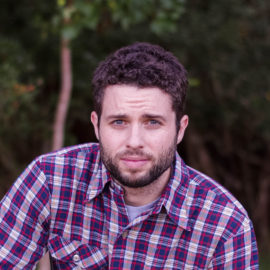 Blaine Prescott’s work has appeared in or is forthcoming from Ninth Letter, Idaho Review, Notre Dame Review, Shenandoah, and Southeast Review. He won the Inprint Alexander Prize in Fiction in 2020, the Inprint Donald Barthelme Prize in Poetry in 2021 and 2020,  and was a C. Glenn Cambor Fellow from 2018 to 2021. Prescott holds …