The Thompson kids’ dad sold the black walnut trees behind their house for timber and now clusters of big sad stumps spoiled the backyard. Tess was living with and caring for the kids—ten-year-old Miles and eight-year-old Minnie—while the Thompson mom recovered in some facility for broken-down women and the Thompson dad drove a long-haul truck to try and pay for everything. During her first week on the job, Tess rummaged through the drawers in the master bedroom and came upon the receipt from the timber company. Seven hundred and eighty-seven dollars, for all of it. To Tess that sounded like both a fortune and not nearly worth it. Now there was nothing to shade them from the early-May sun already beating down and promising a hellscape of a summer.

Miles acted as if the stumps were the best thing that had ever happened to him, and maybe they were. He was constantly inventing stump games that called for ever-increasing acts of physical prowess that Minnie couldn’t match, which was absolutely his point. Minnie—too old to play with dolls but obsessed with an ugly plastic one dressed in hand-crocheted pastel pink plantation garb that some church lady gave her right after her mom got taken away—set her doll on the lawn chair by Tess so they could both watch as she attempted a wobbly little headstand on one stump while Miles pelted her with ping pong balls from another.

“Be careful,” Tess said because she was the grown up. Twenty-one next month. If Miles and Minnie had taught her anything, it was that she’d never have kids of her own, but as far as jobs went, this wasn’t bad. She could spend much of her time doing the two things she loved most, drinking and reading. On her last library visit she’d checked out a stack of horror books about malfunctioning women that the librarian had helped her pick out. One good thing about quitting the community college: she could read what she wanted now. As for the drinking, she was pretty good on weekdays because she had to drive the kids around, but Saturdays meant no rules. The sun shone directly overhead and Tess was on her third vodka tonic. Lovebug season was the worst in years, thousands of copulating insects stuck end to end for life while they drifted in flight like snowflakes. If snowflakes were black and red and drifted both down and up. Louisiana snow. Tess fished a drowned pair from her drink, flung them on the grass, and sucked from her bendy straw.

After Minnie toppled out of another headstand and Miles yelled, “You suck at this!”, Minnie crawled over to the lawn chair and apologized to the goddamn doll. “I’m so sorry, Thea,”—that was its name, Minnie had announced one night last week after she’d pretended that it had whispered its name into her ear, and ever since then, that name, Thea, had wormed its way into Tess’s brain—“You’re so smart and pretty, if you were playing you wouldn’t fall over like I did. I’ll do better, I promise.”

The phone rang inside the house. They’d left just the screen door shut in the back so that they could hear in case their mom called, which had not happened even one time in the five weeks since she’d left, but the kids were ever hopeful. At the first sound, Miles shot off of his stump and darted to the house. Minnie whined after him, “It’s my turn to answer the phone.”

“Come here,” Tess said. She put her arm around Minnie’s bony shoulders while the little girl sat in the crabgrass next to the lawn chair and picked lovebugs from the doll’s frizzy brown plastic hair, squishing them between her fingers and wiping their guts on her shorts.

Tess noticed something moving in her peripheral vision and looked up to the woods that bordered the property, pine woods that the Thompson dad couldn’t sell because he didn’t own them. The weird girl who everyone called Sister Gail Liebrecht was over there again, watching.

“Go away!” Tess yelled and the girl shifted behind a tree but otherwise stayed put.

Minnie clutched the doll to her chest and whispered, “Hi, Sister Gail.”

“Just ignore her,” Tess said and took another sip of her drink. The girl, who was maybe fourteen, fifteen, wore a thick denim skirt with a hem that brushed the ground, a dingy blouse that covered her neck and wrists. She had scraggly white-blonde hair down to her ass. Pentecostal. Everyone knew that Gail’s family lived somewhere in the woods with well water and no electricity and were the most Jesus people in their entire small town full of Jesus people. This was the third day in a row that Gail had shown up to watch them but wouldn’t come any closer than the trees and ran off if they tried to approach, only to come back later. Tess felt suffocated just seeing that girl in all of those clothes. She took off her t-shirt so that she was just wearing her bikini top and cutoffs. More sun on her burnt skin.

Miles ran back outside and said to his sister, “That was Mom. I would’ve got you, but she told me not to. She didn’t want to talk to you.”

He was obviously lying but of course Minnie started crying. “It was!? You knew I wanted to talk to her, Miles. You knew I did!”

The way Miles’s shoulders hunched in on themselves at her words made it apparent that she’d gone too far. A low blow, but come on, Miles, don’t dish it if you can’t take it. A few days before his mom was taken away, after things had gotten really scary though Tess didn’t know all the details, Miles had said that he couldn’t live with her anymore. The Thompson dad had told Tess a little about it to explain that, although Miles acted like a bully, he was carrying a lot for a ten-year-old boy. Tess shouldn’t have suggested his mom might not want to talk to him. But the kids grated on her, and that Gail girl was over there still staring and creeping her out. All she wanted in life was to read her books and finish her drink so she could make another while the sun beat down on the unshaded yard and the bugs got all over everything.

To continue reading this story, please purchase a copy of issue #14 or subscribe to the magazine 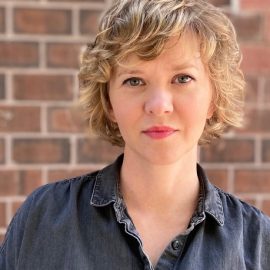 Laura Venita Green is the 2021 Story Foundation Prize winner. She is an MFA candidate and Undergraduate Creative Writing Teaching fellow at Columbia University. Originally from Louisiana, she currently lives in New York.