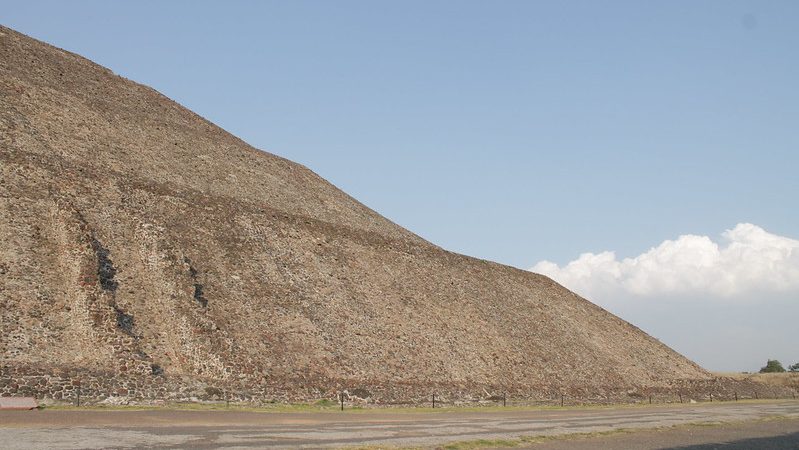 The next curve is a tricky one. Too much pressure on the gas and the van could tip. Not enough, and the truck a cigarette-length from your fender will send you flying cliffside. Or worse, they’ll overtake you ‘round the blind corner. This happens, and your regulars will click their tongues and say each second costs them money. You check the rearview with the crack across its length and missing top-left corner. Do a quick headcount. About equal per side, but the heavier ones are on the right. Plus, cargo weight up top will help, long as all four wheels stay on the ground. You tap the accelerator and turn the steering wheel, let the downhill force do the rest. Someone calls from the back. It’s their stop up here. Francisco leans out doorway, signals at the truck behind you that you’re pulling over. The van door slides open and Don Juarez and his pregnant wife climb out.

Moment Francisco has their fare, your wheels are spitting rocks and dirt as you swing back onto the asphalt. You’ve been up since before the roosters and got six hours left of sunlight. Up ahead you see someone flagging you down. You start to slow, but when you get close, you see it’s Hector—gold teeth shining like a beacon. You double tap the gas and he’s adios in the rearview. Francisco is giving him the bird, and you can’t see Hector through the dust, but you’re sure he’s doing the same.

“Fucking asshole,” Francisco says, sitting back down in his seat. He pulls his cowboy hat back on. Learned his lesson ‘bout not taking it off before leaning out the doorway.

Last time you picked up Hector, he stiffed you on the fare. Always that chance with him. But the van is full today. No rain yet, and people are out. No need to risk it. A motorcycle zooms by on one wheel. The woman on the back, baby ‘round her shoulder, leans into the driver’s neck. The baby looks at you. Is wrapped so tight it can’t move. Then they’re gone, down the hill, and you’re pulling over to let someone else out. Then it’s back on the road.

Behind your seat, a woman counts beads, prays for safety. Francisco rolls his eyes, tells her to shut up. He’s young. Late 20’s. Likes to act older. But he’s a good worker, so you keep him. Has helped you out of a few bad situations. Like the time the van did tip over, years ago. No one died, barely a wet eye from the passengers. He hooked you up with a mechanic who gave you a discount, so long as you agreed to transport the occasional sack of marijuana when needed. Now you get paid to do it. No one knows what’s in the bags, don’t even know they belong to you. It’s easy enough. Got one up there right now as a matter.

Another stop, and Francisco climbs up the back, unstraps a sack and tosses it down to a boy no older than yours is right now. The boy hands over money and is gone faster than Francisco can count.

Ten per head, five per bag.

Francisco looks in the direction the boy went. You look, too. Nothing but trees.

“Son of a bitch,” Francisco says. He hops back in the van. “Any of you motherfuckers tries that,” he says, shouting loud enough to be heard in the back. He taps his machete against the dash.

“¿Someone need to get off here instead?” he says.

The heads in the rearview are all shakes.

Purchase a copy of issue #14 to read the rest of this story, or subscribe to the magazine.

Jared Lemus is Latinx writer and recipient of the Nordan-Kinder Award in fiction. His short stories and essays have appeared in the Kenyon Review Online, PANK, Cleaver, and Joyland, among others, and are forthcoming in The Pinch, Kweli, and The Cimarron Review. He is an MFA candidate at the University of Pittsburgh, where he is …