“Play ball,” the umpire yelled, raising both hands. Crouching low behind the catcher, he pointed his finger out toward the center of the diamond, out toward the girl standing high on the hill.

She nodded. Then pressed her fingers against the gleaming sphere, drew her eyes into slits, and looked for the sign.

Around her, the crowd buzzed. Taunting, mocking, badgering her with rounds of poison, with fresh streams of doubt and ghost-whispers from the past.

“Eh, they’re throwin’ the game,” a middle-aged man yelled over clouds of flat beer. “Why they startin’ a girl out on the mound?”

Casting indecipherable moans, the man extended his wrinkled hand, and waved it down in disgust.

The girl accepted the sign. Then she shifted her weight back, nestled her elbows against her waist, trapped the ball inside her fingers, and sent her arms, legs, and hips into motion, into an explosive, choreographed dance. Untangling her fingers from the laces—from the perfect, white orb cutting through air—her eyes traced spiraling flares of leather as the ball spun forward in double-time, as it jutted away from the batter’s bat, as it dove downward, landing inside the catcher’s mitt.

“Strike one,” the umpire said, and just as soon as the words left him, the catcher dropped the ball. Pretending to kick it twice, he moved it around in the dust. Then, he scooped up the messy leather, wiped it off and lobbed it back to the center of the diamond, back to the girl standing high on the hill.

She liked it when he did that. She liked the tacky residue left by the dirt. She liked the imperfections, the dings, the dents, the gritty grains clinging to the laces. Its skin felt more comfortable when the leather lost its sheen, when it blended into the diamond, when it was no longer dainty—no longer flawless, no longer for show—when it was finally allowed to do what balls were made to do.

The girl standing high on the hill inched her fingers across the surface; then she dropped it into her mitt. Lodging the outside of her right foot into the divot in front of the mound, she relaxed her arms and zoned in on a single finger leaning left in the space between her catcher’s legs.

“You don’t belong here,” a twenty-something heckler yelled when the stadium sounds fell to a faint murmur. The girl standing high on the hill heard him, but she didn’t look up. She didn’t pan her eyes over to his steady shoulders. She didn’t settle her gaze on the long lines of his calloused skin.

The batter called “time,” and stepped out of the box. Then he lifted his chin toward the voice, toward his buddy sitting in the stands. With a smirk smudged from ear to ear, he took a practice swing. Then, he settled back into the box.

“Get off the field,” the twenty-something heckler added, inflating his chest, but the girl standing high on the hill ignored him once more. Remaining firm in her resolve, she stayed focused on the plate, focused on her mission, on her determination to control the pace.

Unsteady, the batter watched her. Anxiety beaded up along his neckline and pride throbbed in his palms. He wanted her to pitch off balance—he wanted to shift the control—but she refused to play his game. She refused to give him what he expected, and just before he called “time” once more, she pounced.

Shortening her motion, the girl quick-pitched the ball, sending the orb scorching, screaming, buzzing through the space between her and the mitt. Glove popping echoes filled the stadium, and the batter wobbled in the wake of an empty, loopy swing. Once he regained his balance, he turned and looked at her. One foot in the box, one foot out, he sneered. Then he laughed a little.

“Let the guys play,” another voice taunted from the stands, “It’s not your game.”

This time, the words belonged to a college girl. She stood two rows behind the twenty-something heckler. Swaying back and forth in cut-off shorts and a cropped jersey, she flashed porcelain skin and smug eyes. The heckler turned around and offered a fist bump. When she leaned over and extended her knuckles, his eyes darted right up her shirt.

The girl standing high on the hill looked down.

Then she stepped back.

She ran her fingers across the skin of the ball—the dirty, gritty, dinged up skin—then she tossed it into her mitt, and ground her molars against the doubt. You’re good enough, she lectured from the bowels of her mind. You deserve to be here.

Her catcher’s fingers fluttered in open air; then they moved to the right.

The girl standing high on the hill tightened her jaw. It was her weakest pitch. Besides, he’d expect it, she thought. Knuckleballs are too predictable for an 0-2 count.

She shook off the sign, adjusted her feet, and waited for a new one. Instead, her catcher flashed fluttering fingers once again, this time, more dramatic. He wanted off speed, off the plate; he wasn’t interested in compromise. She looked to her coach, but her coach looked the other away.

Stunned, the girl standing high on the hill hesitated; but then, trying to play nice, she loaded the ball. Focusing her eyes on the batter, she rocked, then shifted, then lurched forward, her knuckles digging into the skin—into the gritty, dirty, dinged up skin—dampening the rotation, the speed, the power.

In holding herself back though, she gave it away.

The batter saw through her and reloaded his hands. He adjusted his weight and tracked the ball like a textbook hitter. Driving the knob out, he extended the barrel, rolled his wrists, transferred his weight and smacked it square, smashing it over the second baseman’s head and into the right-centerfield hole.

The girl’s teammates shifted around her and held the batter to a double.

“Way to get it in,” she yelled over her shoulder, fighting to straighten her spine, but beneath the illusion of composure, a wound festered: layers of ripped, raw skin, layers piled on top of her fortitude—her tenacity—layers upon layers holding her down, suffocating the smoldering embers, embers just waiting for their chance to rise.

Closing her ears and focusing her eyes on the mitt, the girl standing high on the hill leaned forward.

Ghost whispers hovered around the base paths: “This is the way it is, the way it will always be.”

She could feel fists beating against her, hands on her throat, fuel building inside.

She eyed her target. Rocking back, she lifted her leg. In a wave of fury, she launched forward: dragon spit rose from her gut and spouted from her fingers, and as the flames flared outward, the small, stitched sphere flew from her hands and sliced the sky like a comet creasing the blackness.

“Strike one,” the umpire said, pumping a fist behind home plate. The batter hung his head and stepped out.

The girl standing high on the hill returned to the mound. Running her hands across the skin of the ball—the dirty, gritty, dinged up skin—she glanced over her shoulder at the man on second. Eyeing him with scrutiny, she assessed his lead. He’s not going anywhere, she thought, turning back to her catcher.

Accepting the sign, she nodded. Then all at once, she exploded: drawing her body up, and in, and out, erupting with force.

“Strike two,” the umpire shouted, and the girl standing high on the hill returned to her post. Lifting her shoulders, gripping the leather, steadying her feet, she looked back, then in, then forward.

Power pounded through her as she rocked and rose and extended, as she billowed and bellowed and burst forward like lava, like lit gasoline, like a fire-breathing hellion, laying her soul bare on the dirt.

“Strike three; you’re out,” the umpire yelled, punching the sky with his hand. Jeers jounced throughout the stadium. Boos bounded from the iron beams.

“You shouldn’t even be playing,” a sunburned man scoffed from the bleachers.

The girl standing high on the hill paused, turned and looked at him.

Her gaze lit through the derision, the scorn, the disdain, as if it were paper, or twigs, or leaves, charring it, then destroying it, eating it like a flame on flesh, shrinking it, sending it back into itself.

The man sat down.

“One out,” the girl yelled, holding up a single finger, turning back to home plate. “Two to go.”

Photo courtesy of Paul Lim; view more of his work on Flickr 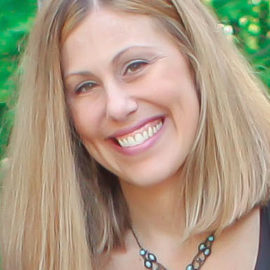 Laura Moore is a writer, blogger and educator. She has a bachelor’s of arts degree in English from Dartmouth College, a master’s of education in integrated language arts from John Carroll University, and she currently resides in Columbus, Ohio with her husband and son.