It opens on a summer day outside a coal-burning power plant on the coast of Lake Erie. 2016. Nick, about forty, is dressed in a blue Oxford shirt and khaki slacks—the uniform of the mild-mannered, prestige TV protagonist. His wife, Sabrina, thirty-five, is dressed in a blue t-shirt that reads “Save Yourself” across the chest. She holds a megaphone, showing off her yoga arms. Nick lingers in the crowd. There are seven environmental nonprofits in Northeast Ohio and theirs cleans up the most. She’s stunningly photogenic. Back at the office their walls are covered in framed photos of her with people like Al Gore, Jane Goodall, and Erin Brockovich. Sabrina’s the face, Nick’s the brains. This is how their marriage works.

Extras in blue “Save Yourself” t-shirts cheer her on with signs that read: No More Coal and End Fossil Fuels. As she rallies them to hound local politicians into decommissioning the power plant, loud engines roar.

Black smoke chugs across the screen.

Everyone coughs but Nick’s prepared. He reaches into his canvas tote-bag and begins passing out N-95 masks. A long procession of pick-up trucks covered in American flags and red banners drive past, honking horns. They’ve modified their engines so the diesel fuel sputters extra smoke. It’s called “rolling coal,” a practice meant to intentionally poison the atmosphere, just to stick it to libs like Nick and Sabrina.

Sabrina rolls with it. She doesn’t bother with her N-95. Instead, she smiles wide and waves, twirling to show the text on the back of her shirt: “Save Yourself, Save the Earth.”

While the extras rabble rouse, Sabrina calms them. She speaks into the megaphone, “The brave are always the first to embrace change. It’s the weak who can’t let go of the past.”

But if this was a different kind of series, he might track down the members of the coal-rolling gang. He is a tech whiz after all. Wouldn’t be too hard to hack into law enforcement databases, run their plates, give them a good scare. He might wait outside their jobs, twirling a baseball bat. Or maybe play a long con on them, resulting in them losing everything—their homes, their families, their diesel burning pick-up trucks. The small thrills would propel Nick to take on bigger risks. He’d become an environmental vigilante and, over time, it’d become clear he’s even more unhinged than those he punishes.

However, his natural charisma and likability will make up for his sociopathic tendencies. Each time he stalks a new polluter through a parking lot, the audience will root for him. And when he returns home to Sabrina each night, she’ll smell the blood and diesel on his clothes but will keep her suspicions to herself.

This is not that show.

In this series, Nick and Sabrina just complain to their friends.

Frank and Kate’s backyard patio overlooks the lake. In the far off distance, Nick can even see the power plant. Sabrina, still sporting her “Save Yourself” t-shirt, holds a glistening glass of white wine. Frank clutches a bottled beer while tending the electric grill. His and Kate’s kids run around the yard, playing.

Nick and Sabrina explain the concept and their friends are still baffled.

“What’s the point?” Kate asks. “Aren’t they poisoning themselves?”

“That’s what we’re up against this November,” Frank says, sighing.

Frank’s a history professor and Kate’s a Cleveland-famous painter. They have more money than Nick and Sabrina—but mostly because they come from it. They inherited their house from Kate’s father, a Cleveland Clinic surgeon, and Nick guesses they pay the property taxes with Frank’s trust fund. It’s probably worth mentioning that Nick once had a brief fling with Kate when she and Frank were on the outs, but that’s something he and Kate never, ever talk about.

Nick sips his beer, choking back a laugh. “Frank,” he says, “you’re about to get me in trouble.”

“They used to go cliff diving down there,” Kate says. “Even in the middle of winter.”

The kids have perked up, especially the oldest one—a boy who looks like a young replica of Frank. “You and Uncle Nick went cliff diving?”

“Why,” Sabrina asks, “would you do that in the winter?”

Nick doesn’t want to confess. Now Frank is the one laughing. Kate leans on her elbows and flashes a sparkling, mischievous smile at Nick. He’s not imagining it. She does this sometimes.

“Because,” Nick says, “the water was warm all year round.”

Sabrina scowls. Frank and Kate laugh. Once their twelve-year-old figures it out, he squeals in grossed-out delight. “That’s disgusting!”

Nick laughs too, recalling his college days, how he and Frank would launch themselves off the cliff into the shock of cold air. The drop always felt like it took longer than it did, but once they hit the water they were shocked again by its gentle warmth.

Sabrina remains quiet the rest of the evening. At first Nick assumes she’s recovering from the long day. It’s not until they’re in the car, driving back to their side of town, that she speaks up.

“Do you ever think about getting checked out?” she asks.

“Swimming in all those hazardous chemicals.”

“It was twenty years ago.”

“That stuff causes all kinds of long-term health problems,” she says, running her fingers along his knee. “Cancer…respiratory issues…reproductive problems…”

Once he gets where it’s going, he knows it’d be easy to shut the conversation down. But he doesn’t. He lets her go on. She’s been off birth control for over a year and nothing’s happened. Until now, it wasn’t anything that actively concerned him. They’re happy with their lives. They don’t have as much money as their friends, but they do something worthwhile. They make a difference. That’s not something everybody else can say.

“We’re not getting any younger,” she says, even though she is five years younger.  “If there’s a problem, we need to figure it out now.”

If this was another kind of series this is when Nick would visit a slew of doctors and discover he has prostate cancer. Only a few months to live. This is when he might snap, do all the things he’s truly wanted to do—deep down—and finally become the person who’s always lurked beneath the surface.

He’d reach out to his estranged dad, a gambling addict, and ask him to teach him to scam casinos and count cards. With Nick’s brilliant mind for logic and organization, he’d sweep across the tables and tournaments his dad can no longer play in. They’d travel across the country. Nick a cancer patient, his dad an old Vietnam vet. Gradually, they’d mend their broken relationship through shady dealings with high rollers and close calls with pit bosses. 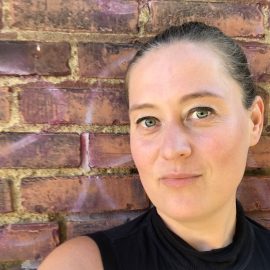 Meghan Louise Wagner is a writer from Northeast Ohio. Her work has appeared in or is forthcoming from such places as The Best American Short Stories 2022, AGNI, Autofocus, Okay Donkey, Luna Station Quarterly, McSweeney’s Internet Tendencies, X-R-A-Y Lit, and elsewhere.