We are gods. Our very thoughts could strip the axis from earth’s belly, take continents apart like dismantled puzzles. Humans are a blight, plague of flesh swept through. To serve them is ignorance, casting pearls among swine. May the heavens collapse on them, their fear be the noose that slips around their puny necks. Nature has ordained our genes to speak the supernatural. It is only this we should obey.

I watched my family enter ovens, corralled like chattel to slaughter by these dogs. Do you think I will not destroy them? Legions of them stood while my wife shrieked inside a building of flames. I was trapped by them, their bodies, a wall that blocked me from her. The abrupt silence of her voice brought about their destruction.

I made a promise to her and her alone. The last one I will ever make. That night, I stepped over their carcasses buried beneath my wrath, and walked away from all of it. A large light bloomed inside me as their blood pooled at my feet. History has shown us who they are, that life is as valuable to them as trinkets from a candy machine. We were born to sweep them from this planet like dust.

Think of the possibilities. 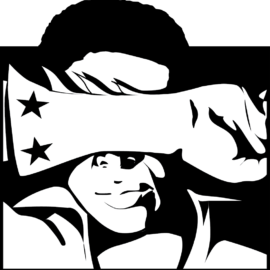 Krista Franklin is an interdisciplinary artist whose work revolves around intersections of  the literary and the visual, and explores the concepts of Afrofuturism and AfroSurrealism. Krista Franklin, Study of Love & Black Body (Willow Books, 2012). This poem is included in Drawn to Marvel: Poems from the Comic Books (Minor Arcana Press).