We had to preview Tinker’s performance video project. Chantal’s condo at Forgetful Bay was all dressed up in 20th century modern, original Eames stuff, some Aalto, Risom, some stuff I didn’t recognize except to see that it was in the same ballpark as the stuff I did recognize. Most interesting was that nothing looked like a replica. “Great house,” I said.

“In which I have lived for many years,” Chantal said.

“My late husband was a collector.”

“Bert,” she said. “He died right upstairs.” Here she pointed straight up at the ceiling.

“I’ve still got the body outline on the floor,” Chantal said.

“We’re going up to Tinker’s room for the preview,”she said. “You want something on the way up? Some cake?”

To continue reading, please purchase a copy of Issue #1, 2014 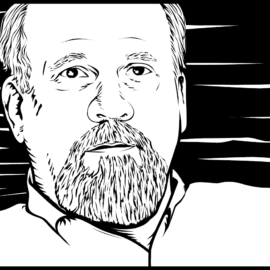 Frederick Barthelme has published sixteen books and over 70 stories and nonfiction pieces in The New Yorker, Esquire,The New York Times, Men’s Health, Playboy, and elsewhere. He directed the Center for Writers at the University of Southern Mississippi from 1977-2010, where he also edited the literary magazine Mississippi Review. His new novel, There Must Be …