I had always hated Mila’s boyfriend, but because she loved him and because she was dying, I tried to be polite. When he called, it was one in the morning Pacific Time and I’d already been asleep for hours. He said, “Mila’s asking, do you have any bud?” as if we were twenty and I were still selling weed. I told him she should get a medical card—obviously it couldn’t be shipped or flown—and he said, lowering his voice, “This is her asking you to come. Can’t you drive it out here?” When I hesitated, he added, “I mean, you’re not really working, right?” I had recently given birth to my second child and was struggling to set up a consulting business I could run from home, a goal that had recently become a necessity after my husband had informed me a few weeks earlier that he wanted a divorce, but yes, Josh was correct, I did not have employment from which I could be fired.

Two months before his call, Mila had phoned to tell me her diagnosis and I’d insisted on visiting that same week, forgetting our most recent argument, humiliating myself by sobbing while she listened silently on the other end. It was the first we’d spoken in over six months, since she’d said it was idiotic to quit my job to care for my kids, and I’d called her a narcissist with a meaningless life. I apologized, but Mila brushed off my requests to visit, promising she’d call with any new information. The cancer was thriving. I pictured it sprouting and blanketing, like the algal blooms in the spring swamps of Minnesota where we’d been girls together. Before hanging up she’d laughed and said, “When I die, at least I’ll finally do something before you.”

The week after Josh’s call I loaded the freezer with bottles of breast milk, left my three-year-old and seven-month-old with my soon-to-be ex-husband, and set out across the West in our old car. Wads of weed gummies, red velvet cookies, and toffee lay buried in a full coffee tin under camping equipment in the trunk. The budtender at the dispensary had looked all of twelve and had given me an exaggerated frown when I told him it was for a dying friend. “You want edibles,” he said, rubbing his sparse goatee, before asking if the client was elderly. I told him she was diagnosed the previous month, just after her thirtieth birthday, and he moaned, “Fuuuuck,” trying to be kind.

I wasn’t entirely sure what the laws were regarding state lines. Before I left, my husband said, “Why would you do something so risky just so she can pretend she doesn’t care about seeing you? She’s not even nice to you.” I prickled at his declaration and later wondered if it were true, but honestly, I wanted to be reckless and extravagant for her; it felt like the only appropriate thing I could do.

I also hoped a few days apart might change his mind about leaving me.

And although I hadn’t told Mila about the divorce, I wanted the comfort of her presence, of being near someone I’d known in childhood, someone who needed me.

I flew through the red moonscape of Nevada, across great salt flats, into barren fields demarcated by decaying fences. Throughout the trip my breasts ached and I pumped in filthy gas station bathrooms. After midnight I wheeled into a deserted campground outside of Rock Springs and set up camp for five hours, pumped and dumped again in the tent, slept hard, and the next day drove straight through to Minneapolis, presenting myself on Mila’s doorstep just after two in the morning. She was asleep but Josh hugged me for too long on their windy brownstone doorstep, crying into my clavicles as if we were friends.

When I woke in their guest room, I smelled coffee. I discovered doughnuts on the dining table, a modern monstrosity that was, just like everything in their apartment, excessive for two people. Mila came in just as I was stuffing a Boston cream in my mouth. I hadn’t eaten since a Subway in South Dakota. She leaned against the doorway and said, “Your boobs are huge.”

We hadn’t seen each other since before I’d given birth and I was aware of her appraising my body the same way she always had, like when we were sixteen and a boy I loved fucked another girl and she’d told me, over a shared cigarette, “If we were in different times, guys would be attracted to your body type.” She blew smoke over my shoulder. “You know, plowing fields and famine and shit.”

She was so very skinny. Her thighs and ass had filled out in her twenties, but now her pajama bottoms hung off her hips again like they had when we were children. I resisted the urge to cry; tears had always annoyed her.

After Josh left for work, Mila and I spent the morning in our pajamas, talking in the sunny living room. The conversation was forced, but I didn’t fear we’d lost our easy way together; I knew Mila was trying to make me squirm, a skill she’d acquired in law school. I politely answered her questions about the weather, the wildfires, refused to snap at her like she wanted me to.

Later, we walked to a cafeteria-style lunch spot with overpriced gourmet food and Mila ordered a cup of soup, lifting spoonfuls while she spoke, as if she were about to eat, then lowering the spoon back down. I counted three bites. I didn’t know what to say about her appetite, so I pretended not to notice. She’d been anorexic in college and I kept thinking of this as I watched her not eat.

To read the rest of this story, please purchase a copy of issue #15 or subscribe to the magazine 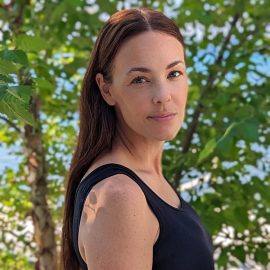 Chelsea Bowlby received her MFA in fiction from Vanderbilt University in 2021. Her first collection of stories is titled Call Me When You Land, and she is currently working on a novel. She has work forthcoming in Joyland. She grew up in the Midwest and now lives in the Bay Area.