William Lychack is the author of several works with the most recent being the novel Cargill Falls, published in February of 2020 from Braddock Avenue Books. His previous books are the novel, The Wasp Eater, a collection of stories, The Architect of Flowers, as well as two children’s books, and a nonfiction book about the history of cement. His awards include a National Endowment for the Arts Fellowship in 2012, a Christopher Isherwood Foundation Fellowship in 2008, and his collection was a Discover Great New Writers selection in 2011. He has received a Sherwood Anderson Award, a Pittsburgh Foundation Grant, and has been a Barnes and Noble Discover Great New Writers Selection

In praise of Cargill Falls, Author Paul Yoon wrote: “In how it slows down the world, William Lychack’s Cargill Falls achieves something quite unexpected: this is a book that makes your heart drum loudly, that leaves you breathless under the tall canopy of a forest in Connecticut in the 1980s, that pulls you toward a single day’s burning, bright core. Not since William Maxwell’s So Long, See You Tomorrow has a novel captured so wonderfully the landscape of youth, regret, mystery, and violence, and done it with such tenderness, humor, and raw, wild energy.”

In an interview with the Los Angeles Review of Books, Lychack spoke of his use of autobiographical material in Cargill Falls. He shared: “It’s not so tedious to tease out the real from the fictional, and everything I write has a seed in reality. I like playing with that line between fact and fiction… I suppose I choose autobiographical material because writing is so difficult for me. You’d lose all respect for me if you knew how much work goes into the smallest so-called “achievement.” I need to care about the material in ways that will make the stories feel somehow necessary for me to write. I need to care so much that I don’t care if anyone else cares, which makes me care, of course.”

Lychack lives in Pittsburgh and is an Associate Professor and Director of the Graduate Writing Program at the University of Pittsburgh. 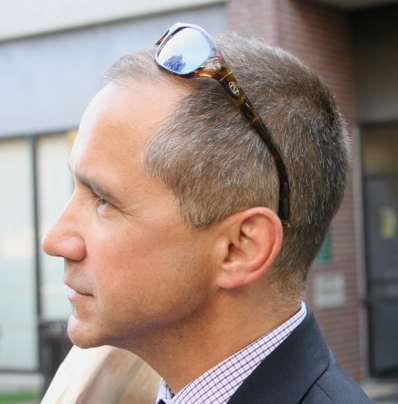