George Singleton has published nine collections of stories, two novels, and a book of writing advice. In September 2020, Hub City Press published You Want More: Selected Stories of George Singleton, which is composed of 30 of his best stories. He received the John William Corrington Award for Literary Excellence from Centenary College in 2016, the Hillsdale Award in Fiction from the Fellowship of Southern Writers in 2011, and a Guggenheim fellowship in 2009. In 2015, Singleton was inducted into the Fellowship of Southern Writers.

In a starred review of You Want More: Selected Stories, Kirkus Reviews wrote, “These stories have absurdist energy, wit, and inventiveness to burn, but antic comedy is their mode and métier, not their sole aim or reason for being. Singleton’s work doesn’t wear literariness on its sleeve; even when he channels canonical writers, as in “John Cheever, Rest in Peace,” he does so in a way that’s literal and can seem almost anti-literary—making the grandly metaphorical, life-spanning “The Swimmer” into a story in which a man suffers a heart attack on his riding mower and then, dead, cuts a gently arcing swath across his town before crashing into a silo. But these stories are often sneakily ambitious, sneakily moving. Singleton has Charles Portis’ gift for writing a satire both ruthless and lined always with affection, and like that Southern icon, he’s a master of and evangelist for the joys and idiosyncrasies of speech, especially the loquacious talk of barrooms and Little League fields and scrapbooking shops. For the uninitiated, a wonderful introduction to a Southern original.”

Singleton’s work has appeared in the Atlantic Monthly, Harper’s, Georgia Review, Southern Review, Agni, One Story, Zoetrope, Playboy, Epoch, Carolina Quarterly, Mid-American Review, and elsewhere. His work has been anthologized in ten issues of New Stories from the South—the Year’s Best, The Pushcart Prize anthology, among others. He was a longstanding teacher of fiction writing and editing at the South Carolina governor’s School For The Arts and Humanities in Greenville, SC.

Singleton appeared in an interview with Story in September 2020. He shares his writing preferences, inspirations, and the common themes he incorporates into his work such as small southern town settings. He shared, “My professors would say, You know, George, you’re from a tiny cotton-mill town, and you’re trying to write about these other places… It took me a while to figure it out. I started reading Flannery O’Connor and I noticed that she was writing about places even smaller than where I’m from. That’s how you do it. And if you do it right, it works anywhere. If you just keep in your mind that the protagonist wants something and the antagonist is standing in their way, it doesn’t matter where the heck you are. You can be in the North Pole, and write a story about wanting some whale blubber but having so-and-so standing in the way. You can write a story about wanting Samantha to love you, but Frank is in love with her and she loves Frank more. Just keep that in mind.” The full interview can be read here.

Singleton hails from Anaheim, South Carolina, and was raised in Greenwood, SC. He has a B.A. in philosophy from Furman University, and an M.F.A. from the University of North Carolina at Greensboro. Currently, he holds the John C. Cobb Endowed Professor in the Humanities Chair at Wofford College, in Spartanburg, South Carolina, teaching grit lit, comedic prose, and fiction workshops. His better half is Glenda Guion, a ceramicist. Although they once harbored up to eleven rescue dogs, it’s now down to three: Mabel, Lily, and Sally, and the Manx cat named Nub. 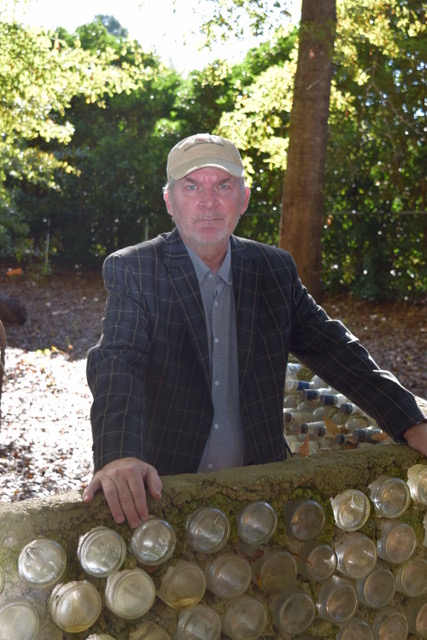