In an interview with Catapult in 2018, Wang shared, “I’m having a lot of fun exploring stories with hyper-masculine protagonists who become the punchline or are taken down several notches: the male stripper who is not very good at stripping, the club bouncer who is not intimidating at all. I’ve entered bodybuilding contests in the past, which I was never very good at, but living in that esoteric world provided me with orchestra seats to observing the absurdity and hilarity that can result when unfettered, oiled-up hyper-masculinity is rewarded with large trophies. I’ll never get that trophy, but if I could get a couple of stories from this, it’ll be totally worth it.” Wang’s story, “Happier Lands”, published in Epiphany the following year, follows his previously mentioned themes of hypermasculinity and bodybuilding.

In an interview with The Southern Review, Wang discussed his story “Good Luck, Champ” which appeared in The Southern Review’s winter 2022 issue. Wang explained his inspiration for the story, which is centered around professional wrestling. He shared, “I, too, am not well-versed in professional wrestling (or sports in general). I used to watch Hulk Hogan and The Ultimate Warrior pummel each other, but the internet tells me that was over thirty years ago, and that’s pretty alarming. Regarding this story’s inspiration: I often write the initial scene without knowing where the story is going, with just a vague sense of its possible directions. Also, I really enjoy poking fun at sincere hypermasculine characters, and Kolache Kaden fits this bill, and I had him in mind as a starting point and to help me begin laying down the initial framework. Bringing Noah in provided a little more clarity, but what really got things going was bringing Toby in. It was only then that I understood that I wanted this to be a story about a wrestler grappling with his faith and his despair and sense of unfairness. But until I brought in Toby—with his man-bun and hip pastor vibes—I wasn’t quite sure where this was going.”

Wang holds a B.S. in Operations Research from Cornell University and an M.F.A. in Creative Writing from the University of Nevada, Las Vegas. From 2017 to 2019 Wang was a Reader and Assistant Fiction Editor for Witness Magazine

He is currently a Ph.D. student at the University of Houston. Wang is working on completing a linked story collection, of which “Good Luck, Champ” is included, that centers on the lives of a cast of characters who grapple with trauma and various existential questions. 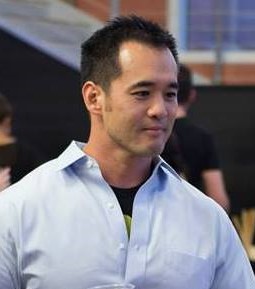