Cara Blue Adams is the author of You Never Get It Back, her first story collection published in December 2021 by the University of Iowa Press. It was the winner of the John Simmons Short Fiction Prize in the Iowa Short Fiction Prize Series, featured in the New York Times, named a New York Times Editors’ Choice, longlisted for the Story Prize, and was a finalist for the Mary McCarthy Prize in Short Fiction at Sarabande Books. It has also been featured in Reading My Tea Leaves, and on Ordinary Habit.

Chicago Review of Books named You Never Get It Back as one of the 12 Must-Read Books of December 2021 and wrote, “Winner of the John Simmons Short Fiction Award, Cara Blue Adams’ keenly observed collection of linked stories is the perfect companion for long winter nights. Remarkably expansive within a limited space, the pieces here conjure such masters of the form as Munro and Beattie while staking out a territory all their own. Following the character Kate from her early days in Vermont through her struggles to define herself later in life, You Never Get It Back is a book you’ll want to hold onto.”

In an interview with Bomb Magazine, Adams outlined her creative process and the important features in writing You Never Get It Back. She shared, “The book moves largely chronologically but not entirely, and so structure was something that required a fair bit of thought and experimentation. That’s something that I love about the linked collection: it offers the flexibility to treat the stories as individual stories, but also to weave them together and to play with time in a way that you might in a novel. I was thinking of some of these stories as functioning almost like backstory.”

Adams’ stories appear in magazines such as Granta, Kenyon Review, American Short Fiction, Epoch, and Narrative, which named her one of their “15 Below 30.” She is the recipient of the Kenyon Review Short Fiction Prize and the Missouri Review Peden Prize, the Meringoff Prize in Fiction, awarded by the Association of Literary Scholars, Critics, and Writers. Her work has received support from the Bread Loaf Writers’ Conference, the Sewanee Writers’ Conference, the Kimmel Harding Nelson Center for the Arts, the Lighthouse Works, the Virginia Center for the Creative Arts, and the New York Foundation for the Arts. She held a 2018-19 Center for Fiction Emerging Writers Fellowship and was a 2019-20 Lewinson Center for the Study of Labor, Inequality, and Social Justice fellow.

Adams’ earned her B.A. in English Language and Literature from Smith College and her M.F.A. from the University of Arizona. She has lived in Boston, Tucson, Montreal, Maine, South Carolina, and Baton Rouge, where she co-edited The Southern Review.

Originally from Vermont, Adams now lives in Brooklyn, New York, and the Hudson Valley. She is an Associate Professor in the English department at Seton Hall University and Director of Poetry-in-the-Round, the campus’s reading series that brings a range of acclaimed writers and literary professionals to campus each year. Adams is currently completing a novel, Removal, and working on a book-length lyric essay, Weather. 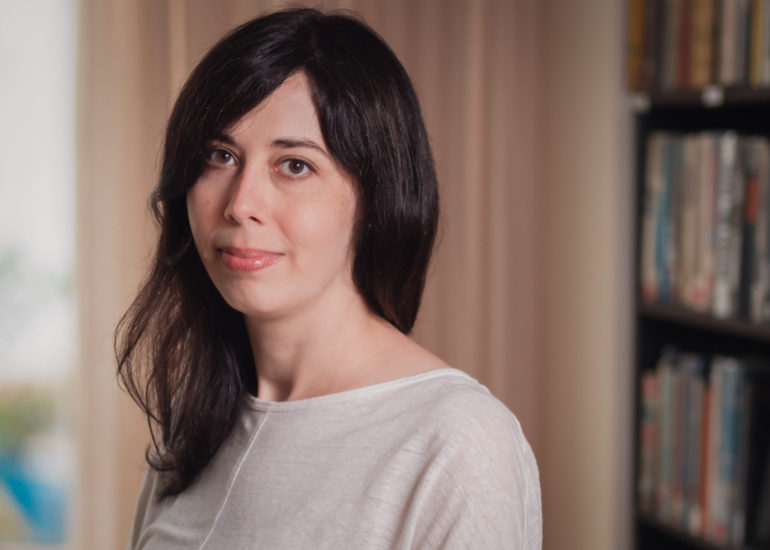