A.A. Balaskovits is the author of the highly-praised Magic for Unlucky Girls, which was the grand prize winner of the 2015 Santa Fe Writers Project Awards(SFWP). Publisher’s Weekly writes: “There isn’t a single tired trope here—in fact, there are few familiar elements at all—so readers looking for something askew from any fantasy they’ve read before will want to get to know the unlucky but determined girls of Balaskovits’s stories.”

In October 2021, she released her second book, Strange Folk You’ll Never Meet. In an interview with The Rumpus, Balaskovits discussed her process of working with, and twisting, popular and well-known fairy tales: “It is part of the challenge and the joy of working in this form. I’m hyper-aware that changing these texts—so ingrained in the cultural consciousness—implicitly changes the message. People have preconceived notions of how the story should play out, so any change is surprising and, perhaps, a violence to one’s idea of how things should be.”

Balaskovits was the recipient of the Sequestrum New Writers Award in 2015 with her short fiction, Put Back Together Again. Balaskovits was a finalist for the Craft Literary Flash Fiction Contest for “Mama Had a Baby and Her Head Popped off”(2019), St. Lawrence Book Award, and Foreword Reviews INDIES Book of the Year (short stories) for Magic For Unlucky Girls (2015 & 2018), Permafrost Book Prize in Fiction and Subito Book Prize for A Girl Without Arms and Other Monsters (2014 & 2015), and Hunger Mountain Howard Frank mosher Short Fiction prize for Put Back Together Again (2013). She was recognized in Wigleaf’s top 50 very short fictions for The Mother Left Behind (2017) and received honorable mentions for Egest Leporidae for The Spider’s Web Flash Fiction Prize (2018) and In the Belly of the Bear for The Golden Key Flash Fiction Open (2018).

Her fiction and essays appear in Indiana Review, The Southeast Review, The Madison Review, Apex Magazine, and Shimmer, among many others.

Balaskovits served as an Assistant Fiction Editor for the Mid-American Review and the Social Media Editor for The Missouri Review, where she launched two series for the blog. The first, the Working Writers Series, interviewed writers without major publications, and the second, Literature on Lockdown, is a series of curated essays by current or formerly incarcerated writers as well as the people who teach them.

Balaskovits hails from the Chicagoland area but has lived all across the American Midwest and South. She now calls Cincinnati, Ohio, her home. She received her B.A. from Loras College, her MFA from Bowling Green State University, and her Ph.D. from the University of Missouri. Currently, she is the Co-Editor in Chief for Cartridge Lit, an online journal of video game literature. 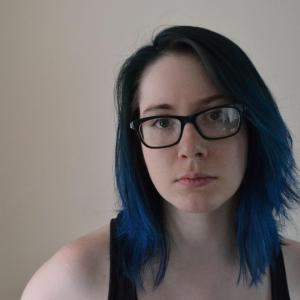