A crumbling Illinois town in the early aughts.

The town’s citizens worship equally at the plentiful taverns and churches, praying over beers and bibles for their factories and their children’s futures.

A group of neighbor boys in their early teens: Aaron, Brandon, and Charles. Their mothers and fathers have lost or soon will lose their jobs at the local refrigerator plant.

It’s mid-summer, and the boys are restless. One night—bugs are swarming the darkness, the train horns inexplicably sound as if they are arriving from both extremely close and very far away—Aaron tells Brandon to fetch a flashlight.

Aaron is the brooding underperforming genius of the group. His parents have worked second shift at the refrigerator plant since he was four. Brandon is the runt, a cowlicky sprig. It’s just him and his mom at home, and she’s barely left the living room since she was laid off a month ago.

Brandon returns a few minutes later banging his hand against the side of the yellow plastic casing, cursing the failing batteries. Charles tells him to hand it over.

Charles is the athlete. His dad is a foreman at the plant. Lately, he only hangs with Aaron and Brandon when he isn’t off at some practice or game, dazzling his more affluent teammates’ parents with his throwing arm or jump shot.

Charles makes the flashlight shine, then passes it to Aaron.

The game, Aaron tells them, will go like this: They’ll wait near the road down by the tracks until a car is headed their way. When the car gets close, right around the time the headlights begin to feel bright, Brandon and Charles will pretend to give Aaron a serious beatdown.

He will fall to the ground, the flashlight tucked to his side, and Brandon and Charles will sham-kick his ribs and face, his neck and gut. If the person driving the car is of a decent sort—and part of the point of the game, Aaron tells them, is to test this, to see what these strangers passing by have in their hearts—they’ll at least slow down. Maybe they’ll roll down their window and shout. Maybe they’ll get out of the car, try to help. Whatever their reaction, if the car begins to slow down, Brandon and Charles will take off running, leaving Aaron there in the street, lumpy with imaginary bruises and slick with what passersby will surely think is blood and sweat.

If the person is only decent, they’ll probably think they’ve done their civic duty by getting the boys to stop their attack, and they’ll drive off. The game, unfortunately, will be over before it’s even begun.

But if the person passing by has a bit of the heroic in their heart, they’ll put the car into park and get out. They’ll approach the heap of Aaron slowly, asking, Son? Are you OK? Can you talk? Is there anything I can do?

Aaron tells Brandon and Charles he won’t answer the person. He will remain quiet, lying in the street, his eyes closed. In the darkness separating his body from the asphalt, as the person gets closer to him, he will grip the flashlight in one hand and turn it on.

Brandon and Charles are really listening at this point. They have no idea what’s coming next.

Then, Aaron says, when the person is standing right over him, when they maybe reach down and gingerly touch his arm as if to check whether he’s still alive, he’ll jump to his feet and shine his flashlight in their face, saying, You can’t kill me! I’m Streetlight Superman!

He’ll run off, too, then, to join the pair, assuming they’ve found a comfy spot from which they can watch all of this go down.

After they all agree to rotate who plays Streetlight Superman/victim, because it’s only fair, the game debuts twenty minutes later.

A car moves slowly through the darkness toward them, and Brandon and Charles commence the pretend beatdown. Aaron crumples to the pavement, and the other two boys yell and kick. Their feet touch only air, but the viciousness of it all feels real. They are exorcising hurt inside them they hadn’t fully known was there until that very moment.

Aaron feels something, too. It’s as if all the abstract difficulties he’s endured over the years have been made tangible and are bearing down on him at once.

Brandon and Charles have run off, and Aaron hears two car doors open and then close. The man and woman who try to save him, the boys all decide later, were great-grandparent-age, in their 70’s at least. It took them a while to make it to Aaron, but their hearts were pure. Aaron could hear them mumbling to one another—Oh dear, I hope that young man is OK, do you think we should call an ambulance—as they approached, and he decided they were way past decent.

Still, he leapt into the air and shined his flashlight in their faces, shouting, You can’t kill me! I’m Streetlight Superman!

The old woman shielded her face with the inside of her elbow like she was being shot at. The old man, he honest-to-God pumped his fist in the air and cried out, Dang kids!

It becomes a thing for weeks for the boys. Everywhere they go, they imitate Gramps pumping that fist in the air; they warble Dang kids! and just about die laughing.

To continue reading this story, please purchase a copy of issue #8. Photo courtesy of Schnitzel Bank; view more of their work on Flickr. 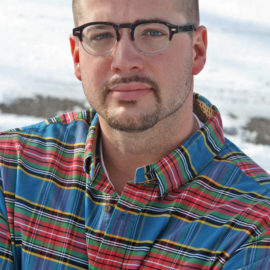 Chad Simpson is the author of Tell Everyone I Said Hi, a short story collection that won the John Simmons Short Fiction Award and was published by the University of Iowa Press. He published a chapbook of short fiction, Phantoms, in 2010. He has received scholarships from the Bread Loaf Writers’ Conference and the Sewanee …