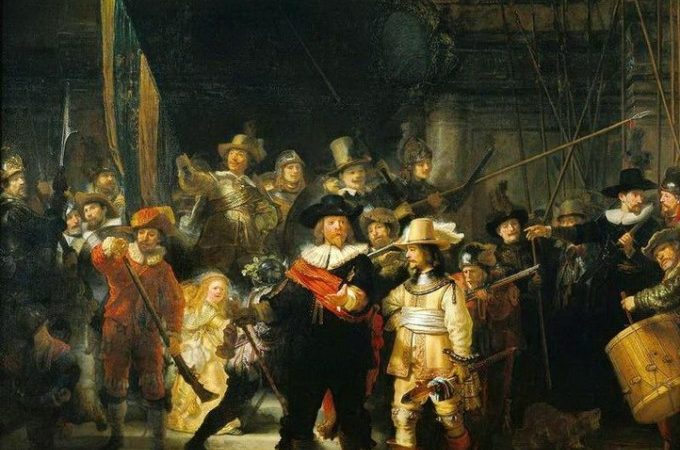 Jules stepped through the wall, into the old, flat world of the painting. “Madam?” The guard poked her head from the real world into this one. “Would you like me to take your picture?”

One end of the gallery was a gilt-framed proscenium. Behind it was a replica of an old Dutch kitchen with a raked stage floor painted in one-point perspective of shiny black and white checks. The side wall had a large window painted on it, letting in a glow of yellow Vermeer light over a Delft-blue bowl and pitcher. A pot of stew hung over the glowing embers of a hearth. A spotted mutt lolled in the foreground, in the corner by the frame, eyeing a big wheel of cheese. A table was draped with an oriental carpet, and on it melted a candle, and over it a hung a hock of pig. Jules walked up the slanted floor to the rear wall and looked back out through the frame into the gallery. The backsides of the kitchen’s furnishings were painted gloss black, exposing the joke: these were just flat silhouettes, just illusion, propped up with pieces of wood. The dog was a paper doll.

The live-inside-the-painting game was for the children, but Jules was feeling greedy. There were no kids in the Frans Hals Museum today. Families were still recovering from the Sinterklaas holiday. There was weather outside. Good time for an old lady to act immature.

The guard was young, with a bit of mischief in her eye, probably bored from looking at the same Jan Steen every day. Jules dug her cellphone out of her backpack and showed the woman the camera button. As if she needed to. The woman’s grasp of cellphones was as fine as her grasp of English.

“Would you like to hold something?” the woman said, pointing to the wall behind her: rows of hooks hung with flat props: a cauldron, a wineskin, a chicken.

“Oh yes. And?” said the young woman, in the spirit of comedy improv. “Would you like this martini glass?”

Jules didn’t want to be silly. She wanted to be part of the illusion. “The merchant’s hat, perhaps?”

“Sure, why not?” Jules put on the big felt stovepipe hat, with its wide brim and golden buckle, hid her backpack behind the fake dog, and awkwardly held the beard and collar in front of her face and neck.

“I’ll play this one serious.” Jules stood while the woman shot the picture.

Smiling wasn’t something people did in these portraits, not really. Jules’s students remarked on this often, once she had pointed it out to them, like all those things that, once noticed, can’t be un-noticed.

“Everyone always looks so angry,” Yasmin, one of her favorite students, said in her office hours once, poring over Jules’s book of Dutch masters. She was working on a paper about representation of the enslaved in European painting. She already had an A. She did not need to spend time in Jules’s office, but maybe Jules needed it, like having a colleague in for tea.

“Is it angry, or stern?” Jules had asked, looking over Yasmin’s shoulder at a large group portrait of white men in black clothes, all staring imperiously out at the viewer.

Occasionally, she surprised Jules by playing with her phone or saying yaaaaaas, like people her age, seamlessly codeswitching between school and street, licking her lips and smiling into the lens of her phone, sending a picture to her Instagram friends, two fingers framing one eye.

“See?” said Jules, pointing to the book. “You notice stuff. You name stuff. Fuck the painting department.” Yasmin was a painting major, but Jules was working on her. Her paintings were conceptual and calculated, not felt, nowhere near as artful as her research papers.

“I wish I could afford to go see these for real,” Yasmin mumbled, flipping the book closed, then scanning the shelf for another.

“Yeah, me too,” Jules said, and Yasmin looked at her with a blinking, quizzical expression, like, but aren’t you the teacher? Maybe Jules shouldn’t steer her into her department with all of its exciting career prospects: negotiating last minute grade changes with lazy students, commuting between multiple adjunct gigs just to make rent, biting one’s tongue in meetings, kissing up to pompous department chairs. Small paychecks, unattainable tenure.

The fear kind of anger.

But now that Jules was here in in the Low Countries, well into her fifties, looking at the Dutch paintings herself for the first time, she thought of Yasmin’s assessment of that European scowl. Anger was not the word she would use now. Fear wasn’t either.

Low was more like it. Low was the word. On the train back from Haarlem, she leaned on the window and watched antique windmills pass in the sleety gloom. The Low Countries—Jules had thought they got the name because of their dikes and canals, the constant threat of flood. Now she figured it must have been their mood. She hadn’t anticipated the dark blue feeling from being in a gallery full of them, in the cold place of their origin, every wall adorned with images of rich people in rich clothes. They were powerful, but that wasn’t all they were. A calm resignation lay behind the expression of so many in the old portraits, even the parties known to be energetic and capable and greedy. They all seemed to be sunken, somewhere behind the eyes, contemplating their own death.

To continue reading this story, please purchase a copy of issue #8. 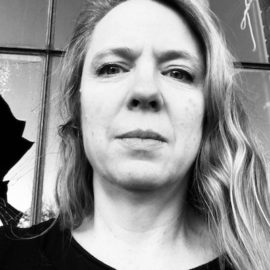 Anne Elliott is the author of The Artstars: Stories (Blue Light Books / Indiana University Press, 2019) and The Beginning of the End of the Beginning (Ploughshares Solos, 2014). Her fiction has received support from the Elizabeth George Foundation, the Story Foundation, Vermont Studio Center, Table 4 Writer’s Foundation, Tomales Bay Writer’s Workshop, The Normal …