One afternoon, as Denise watered plants and I changed a light bulb, we heard the squeal of brakes and a terrible howl. We ran outside. An old VW van with a bright mural painted on its side was parked in the road. A wild-haired, older woman stood next to the van. Our dog lay sprawled at her feet.

“He ran right out in front of me,” said the woman.

“It’s a she,” I said. I sat in the road and lifted Girl’s head into my lap. Thick, hot blood bubbled from her mouth.

Denise screamed, “Do something!”

I told the driver to go away and I told Denise—who was pouring water on her shoes—to go into the house and get a blanket. Now! But before Denise returned, Girl gave three quick yips and died. When Denise returned with a blanket, I said, “Go get a trash bag.”

“I thought you said get a blanket.”

Denise came back with a large, black trash bag and held it open while I gathered up our dog and lowered her into it.

I was late for my yoga class, but, honestly, I wasn’t speeding. Or stoned. I was driving down Alto Street when something jumped out in front of me. I jammed on the brakes, but that van never did have very good brakes. I didn’t know whether I’d hit a child or what. I was so freaked out I could barely open the door.

It was a dog, though, lying in the middle of the road. The dog looked up at me. For a moment we stared into each other’s eyes and I knew I was being forgiven. Then the dog dropped its head down on the street and blood came out of its nose and mouth. That’s when a tall man and a pretty woman came running out of an adobe house across the street. I wanted to help, but the man gave me a look and told me to leave. There was something about his eyes that made me just get in the van and drive away. I looked back as I pulled away. The woman was waving goodbye.

I couldn’t concentrate during yoga class because I kept picturing that beautiful yellow dog lying in the street covered in blood. The next day I made a collage with those colors in it. I was going to give it to the couple whose dog I hit, but Janet, in our Spirit Circle, said it was enough to put it out in the world and if the couple could feel the energy, great, and if they couldn’t, well, just let it go.

When this happened I was completely bummed out, but later I realized it was all part of a plan that’s bigger than me, that poor dog, or even that sad couple.

Back when Girl got killed Robert and I were living out in New Mexico. He wants me to tell about it in my own words, so he can use it in a story he’s working on, homework for a writing class he’s taking. The funny thing is, Robert teaches writing, but he’s “blocked” and can’t finish any of the stories he begins.

Robert’s taken that class several times since we moved back East. He says it helps him get “focused.” And he does get excited about writing for a while, but then he spends less and less time at it, and after a while he stops completely. That’s when he signs up for another class. He says he likes the class because you get to have personal conferences with the teacher. The teacher is a woman and that’s the part that worries me. When I asked Robert what the teacher looked like, he got mad and said, “What does that have to do with anything?”

Anyway, the year Girl got killed we were renting a house in Pojoaque, a little town north of Santa Fe, below the foothills of the Sangre de Cristo mountains. I spent a lot of time working in our garden, which was filled with hollyhocks and cactuses. My arms were covered with red scratches from all those cactus needles. Robert used to say I looked like a junkie.

I’d begun to daydream about the ocean, maple trees, and white houses made of wood. Robert was trying to write a book, but it wasn’t going well; he kept deleting the first chapter and starting over. He was teaching a couple of adult education classes in creative writing, but when he came home from those classes he was depressed and moody. “If I have to read another thinly-disguised memoir about incest I’m going to slit my wrists,” he’d say. “They think changing their name makes it fiction.”

Pojoaque wasn’t much of a town, but it was pretty. In the evenings, for an hour or so, there was a purple glow over everything. That’s when, looking up at those rosy hillsides or off across the valley to the mesa, our lives seemed perfect. Other times, in the hot sun, all I could see was a bunch of trailers, dust everywhere, and Indians throwing trash out of their pick-up trucks.

I think we’d both decided, by the time our dog got run over, to leave New Mexico. We hadn’t talked about it much, but in our heads Robert and I were already gone. A month after Girl was killed we packed up our stuff, hitched up a rented trailer, and drove East.

Exactly what happened is kind of a blur, especially after five years. I remember, though, standing in the street, trying to see how badly Girl was hurt. Robert was holding her in his arms and patting her head. There was blood everywhere. There was blood on Robert’s jeans and it never came out. Whenever Robert wears those pants I think about that time in our lives.

The woman who was driving the van was standing in the road too. She was some kind of hippie, I guess. She kept saying how sorry she was and how she didn’t see Girl until it was too late. I wanted to tell her it was okay, we didn’t blame her, and maybe I would have, but Robert told her “Shut the fuck up and get the hell out of here.” Then we realized Girl was dead. Robert wanted to put her in a trash bag, and that’s what we did, although it didn’t seem right. I wish we’d wrapped her in a nice clean sheet. If something happened to me I’d want to be wrapped up in something soft, not dumped in a plastic bag.

We buried her on a hillside, between clumps of junipers. After we dug a hole and put Girl in it and shoveled dirt on top, we looked at the town below. Lights had come on and smoke rose from a few chimneys. We could see our house from up there. I remember wishing I’d worn a sweater.

That night Denise and I drove up into the hills above the village. Just before we reached the town dump we parked the car and dug a grave, taking turns hacking at the soil. I went back to the car and carried the trash bag, with our dog inside, to the hole. Before I put the bag into the ground I reached inside and, like a blind man, moved my hand all over Girl’s face. Her head was cold and stiff.

We covered Girl with dirt and rocks. Denise and I looked at the grave and then out across the rocky hillside and down at the village.

“It’s beautiful from up here,” said Denise. “Look, there’s our house!” She sounded excited, happy even. Happier, anyway, than she’d sounded in months.

We walked back to the car. I threw the shovel in the trunk and we climbed inside. Before I turned the key I closed my eyes just long enough to say, silently, “Dear God, don’t let the coyotes find her.” I’m not a religious person, but it seemed the right thing to ask for that night. 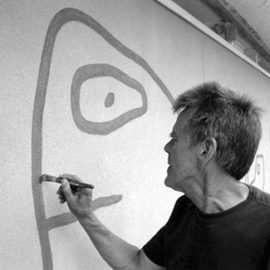 Todd McKie is an artist and writer, staggering from canvas to keyboard but oh-so-grateful for the exercise. His stories have appeared in PANK, Twelve Stories, Per Contra, McSweeney’s Internet Tendency, and elsewhere. He lives in Boston.