First there was a scrabbling sound from the ceiling. Little nails scraping on wood. Ali heard it while she was breast feeding and shuddered. She reached for the phone on the ottoman without disturbing the baby and called her husband. It went straight to voicemail. She texted him: Think we’ve got a critter problem in the attic. Creepy.

Her husband, Gregg, texted back. Can’t talk. In meeting. Will call later.

Ali palmed her free breast, it was hard as concrete and hurt. She shifted the baby to this breast; after an intense tightening like the squeezing of a blood pressure cuff, she felt relief as the milk was released. Almost immediately the breast started to soften. “Thanks, baby,” she said, leaning down to kiss it on its soft head.

The baby kept looking at her seriously but also raised a rounded hand to bat her own face. The baby’s movements were jerky and uncontrolled, almost comical, especially accompanied by the baby’s serious look. “What’s she thinking?” she would ask her husband. “What’s she pondering?”

“Nothing,” her husband said. “She’s not thinking anything. She’s just taking everything in and letting it go back out. Every experience moves through our baby like she’s an open door. Our baby is so cool. Our baby is so zen, she should have her own followers.”

“She does have followers. She has us,” Ali said, smelling the baby’s soft, warm head.  It smelled like fresh bread. Is that why people were always pretending to eat babies? Because they smelled like delicious, milky bread?

Now Ali said to the baby, “Oh, baby, I think we’ve got tree rats or confused squirrels, definitely something small and easily panicked up there.” She tried to sound casual, but she was trembling inside. The thought of rodents in her house would make her anxious at any time, but now with the baby, it was a problem that had to be assessed, attacked, and conquered immediately.

I know, Mom, the baby seemed to say with her steady gaze. I heard it too.

Ali did not really want the baby to have followers. She did not want the baby to be exceptional, definitely not a genius. From what she’d seen and read, being a genius didn’t really bring anyone a happy life. It came with a lot of responsibility and was more of a burden. Actually that was not the whole picture. Ali did want her baby to be exceptional but only a little, only a little more than ordinary. She had already told the baby that she would not be one of those parents who pushed her child into ballet or piano or coding camp if she had no interest. If the baby grew up and was passionate about any of those things, why then of course Ali and her husband would support her, encourage her, drive her to rehearsals and performances, buy her the necessary accoutrements, but only if the baby really wanted these things.

Ali was determined to do everything differently from the way she’d been raised. Some of it was easy. She’d never, for example, need to ask the baby to translate for her with others, or write her own notes to school if she was sick, or if they went to a restaurant that wasn’t Korean look through the menu and pick out a dish for her. But she also wouldn’t need or want the baby to live for her, would let her make her own mistakes, enjoy her own successes, feel her own failures. And she’d keep an open mind if the baby wanted to be something wildly impractical like a singer or writer or shaman or a face painter princess like her five-year-old niece, Lily. Lily was the product of an unsanctioned union between her older brother, John, and his Black girlfriend, Nancy. Ali’s parents still didn’t know of Lily’s existence.

Ali herself had only met her twice, since she rarely saw her brother even when she was still living in Boston. One visit, Lily was a red-faced crying baby and the next visit, she was a cute little girl with brown pigtails that turned reddish in the sun. She was talkative and affectionate, leaning against Ali as she showed off her painted fingernails, each a different color, each her favorite. And when Ali had asked Lily what she wanted to be when she grew up — what a stupid question to ask a child! — she had said right away in a dead serious voice, Face Painter Princess, like it was already a thing and not some glorious concoction from her fertile brain. Ali had immediately wanted a Lily of her own and had prayed through her whole pregnancy that her baby would be a girl.

She heard the scrabbling sound again, but this time it felt closer, like it was in the walls behind the crib. It angered her. She felt like walking over to the wall and kicking it, scaring whatever was there into fleeing. The kick would say, This is my place. Your place is somewhere else.

The house had been nothing but trouble. That’s what they got for picking such an old one. They’d been fooled by a real estate agent who had convinced them that older houses were better made. He had gone into long, rambling detail about how the wood they used back then was thicker and stronger and joined together in ways that made them less liable to crumble and crush them when the big earthquake hit. Everyone in California knew the Big One was coming, it was only a question of when. A frightening thought, which only made it more amazing that you could get used to living with such a frightening thought. But, you could get used to anything if you had to. Ali remembered the apartment she and her family had lived in for their first decade in America. The building belonged to the cockroaches at night. How many times had she turned on the bathroom light to witness their frantic activity as they raced for the closest dark passage, their panic matching her panic. But she got used to it: the panic, the revulsion, the unchangingness of it.

Ali felt a warm wetness leave her body as she adjusted herself in the rocking chair. She hoped the pad was positioned to catch it. The baby was almost asleep, Ali’s nipple falling out of the baby’s pink open mouth. Ali wondered if she could shift the baby into her crib without waking her. She was rarely successful at this, as the baby almost always woke up before Ali could tiptoe out of the room. Everybody told her to let the baby cry it out, but though Ali felt some shame about this, she could not let the baby cry for longer than a few minutes. Even those few minutes were torture. Whenever the baby cried, alarm bells rang in Ali’s head and breasts and core. Her whole body clanged. Nobody had ever told Ali that this would happen. Nobody had told Ali the important things, some very unpleasant. Like that Ali’s nipples would grow enormous, lengthen, and then crack and bleed when the baby failed to latch on correctly. She had heard one harrowing story of a woman whose nipple had been pulled halfway off by an exuberant sucker. After the first week of breastfeeding, Ali’s nipples were reduced to two big protruding scabs. She had to smear Vaseline on them and wear pads in her bra. Pads in her underwear, pads in her bra: her body felt like a leaking boat. Nobody had told her that she would keep bleeding after the baby was born. Bleeding a full pad every few hours.

To read the rest of this story, please purchase a copy of issue #13, which will be released in March 2022. Photo courtesy of Ruslan Kalnitsky; view more of their work on Shutterstock. 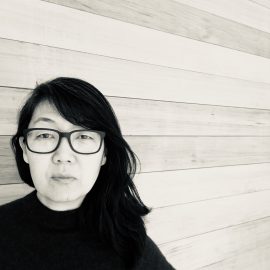 Caroline Kim is the author of a collection of short stories about the Korean diaspora, The Prince of Mournful Thoughts and Other Stories, which won the 2020 Drue Heinz Prize in Literature, was a finalist for the Northern California Book Award, the Janet Heidinger Award for Fiction, and was long-listed for both the PEN/Robert W. …