I tell Algo nice try, but Anthony Keidis is all wrong. Yeah, RHCP is the right decade, but Kiedis’s voice is too blue spotlight, too broad strokes, straight petting, warm corner of the swimming pool. His voice is a tongue pressing too hard in a spot where I need soft, erratic pressure. To be fair, Algo and I have only been dating for a week, and they are still getting to know me, struggling daily to give me what I want. And what I want is Julian Casablancas trying to sing falsetto but not quite succeeding, I need that filtered pseudo-raw masculinity, that unwashed rich boy with Ric Ocasik melodies in his blood making me wet, but then give me something more, I think it lives in the 1990s, or the early 2000s, oh god please hurry. So Algo brings me “Creep,” by Radiohead, and it is such a darling mistake, such a cheap and careless attempt at romance, like grocery store roses. How can I be mad? Try again, Algo.

The superintendent of schools shuts the door to his office and turns toward me, stomach buttoned tightly, palm pulling his face downward in exhaustion. He is probably only mid-fifties, but his eyes are red and loose like an old man, his hair a solid gray. It has been a hard year for the superintendent.

“Forgive me for starting out this way,” he says, approaching the desk, “but who put you up to this?”

I am sitting in an armchair, my blouse done up librarian-like to the throat, my arms spread wide, trying to take up space. I am wearing heels. My legs are crossed. Two days ago, our misguided little town voted me onto the school board, booting out longtime member, Sidney Kreels, a somnolent, but handsy retired science teacher, with three sexual harassment complaints filed against him. His sudden absence, I have been told, has offset the balance of the board, leaving Kreels’ alliance feeling vulnerable when it comes to financial decision-making. It all sounds a bit Survivor. I wonder when the motorboat will arrive to speed me away to the island, if the sunburnt old men will sit me on the beach and tell me to weave palm fronds together while they eat raw steaks, if maybe I should not have worn this itchy pencil skirt. I uncross my legs, open my knees, just a little, hoping to draw the superintendent’s eye into that warm and hopeful—but hazy—negative space.

He sits, heavily, looking out the window.

“Look, I know that Missy Guetti has been working to push Kreels out for a long time,” he says, then turns his attention to the pen that he is rolling between his hands. His fingers are fat, one of them hoarding a gold wedding band in its dough. “I agree that Kreels had to go, but if you’re Missy’s people, then there are a few things you should understand.”

He looks up, allows his eyes to travel over me, fluidly, no staring.

“You’re saying Missy never called you?” He places the pen in the center crease of an open planner, and I glimpse the teeth marks on it before he shuts the cover, carefully. I appreciate the way he handles the objects around him; like he is trying not to offend them, like they are his very ordinary, tiresome, but well-loved children. “She didn’t help you campaign?” He continues. “Not even a little?”

I nudge Algo away from Radiohead, toward Nine Inch Nails, but they hit me with “Heart Shaped Box” instead. Good call, but not quite. Sometimes too much minor key makes me feel like I’m blindfolded, like polyester heat. Algo comes back with more Nirvana, this time, “Milk It.” Yes, that is nearly it. Oh, the dirty, loose change guitar, the engorged power chords, that shitty, beautiful, borderline pit-of-despair screaming. I want baby blue-eyed testosterone at its breaking point. That’s good, so good.

The night before my meeting with the superintendent, an emergency executive session was called so the board could discuss the fate of the principal of the poorest, second-most-violent elementary school in the district, Mr. O’Brien, who had been accused of farting on a small child. None of the other board members had met me yet, and the Vice Chair was annoyed that I was there, weighing in on this important matter, when I had not been officially introduced, established, sworn it—whatever means of initiation was deemed necessary to discuss the alleged farting. I have driven past the Vice Chair’s house, seen the Trump Tractor on his front lawn, which is exactly what it sounds like.

“I thought we weren’t going to renew O’Brien’s contract anyway,” Wendy Wash said, watching me suspiciously as I pushed a metal chair across the floor. For some reason, the executive session was taking place in a huddle beneath the folded-up basketball hoop in the gymnasium of the second-poorest, most violent elementary school—not Mr. O’Brien’s school. My heels echoed with each step. I was wearing lipstick, but not for the meeting. I had been at the bar when I got the call, had just finished explaining to an easily amused, but bewildered drunk boy that I was in a committed relationship with a playlist curating algorithm who lived in my phone.

“I am teaching Algo my love language,” I had said, and the drunk boy had gasped in astonishment, placed his hand on the feeling of poetry in his heart. 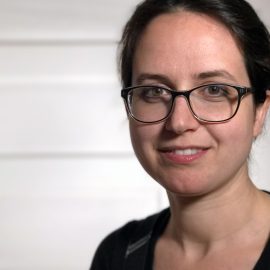 Genevieve Plunkett is the author of the short story collection PREPARE HER and the forthcoming novel IN THE LOBBY OF THE DREAM HOTEL (Catapult, 2023). Her fiction has appeared in The O. Henry Prize Stories, The Best Small Fictions, and has been recognized twice as notable in The Best American Short Stories. Other writing can …