For a handful of years when I was young, I spent two weeks of every summer at my Aunt Maureen’s house in northern Michigan. These visits stopped when I turned thirteen, after I started picking up far too much of what happened between the adults who lived there. Instead, I was packed off to the standard set of sleepaway camps: lanyards and capture the flag and girls with long straight hair lightened by the sun.

The first year, my mother and father drove me to Maureen’s, stayed the night in one of the many half-furnished rooms, spent a great deal of time the next morning kissing me goodbye, and drove back to Indianapolis, where, I can only imagine, having no children or partner myself, they tried to remember who the other was. In the moments after they left, Aunt Maureen looked at me with a slightly baffled expression, as if she was contemplating an animal that had wandered indoors—a raccoon, or one of the minks in the river marking the border of her property. I had just turned ten, and did not know how to help her out of this. With one great effort, she clapped her hands together and said, “All right then, darling!” and steered me outside to her gardens.

In her early thirties, Aunt Maureen had inherited the large, run-down house and a substantial amount of money from her aunt, a woman who liked very few people. Talking about this made my mother’s face go sour. Maureen always spoke of fixing up the house to exacting specifications, bedrooms themed around her many guests’ favorite colors and patterns, but she only ever managed to make half of it habitable at a time. The front room was loaded with furniture intended for the den or the solarium, where carpeting was torn up but not replaced and the wallpaper had been halfway stripped. That year, my bedroom was in the front of the house, where a large, cracked window overlooked a spreading maple tree. There was a little bench with a hinged top framed into the window, and I stored treasures in it: books, seed pods, pretty rocks I dug up near the river. There was also a creeping stain on the ceiling, which Maureen dismissed with a distracted wave. “It hasn’t caved in yet,” she said.

The gardens were meant to be the true glory of the house. The kitchen door let out onto a slate-paved patio hemmed in by trellises, which in summer were completely taken over by vines. There was a little swinging gate and a stone path to the lower gardens, where useful things were grown. It was a sun-dappled, green-smelling place; in childhood I imagined it as Mary Lennox’s secret garden, Lucy Pevensie’s Narnia, but in truth I believe the only plants that flourished were those that could not be killed.

We took a lobster pot down to the spearmint and clipped the fragrant stems with scissors, the sun stroking our backs. Aunt Maureen had never been pretty—her hair was frizzed and unruly, and her nose rather large—but I thought of her as a magnificent witch, mercurial but magnanimous, granting the wishes that in my parents’ house were too fanciful to speak aloud.

Back in the kitchen, we steeped the spearmint into tea and poured it into a tall glass with cracking cubes of ice. Maureen garnished it with a mint sprig, handed it to me, and opened the patio gate. I walked through the gardens, along a path cut through tall grasses, to the wide green lawn and small cottage where Uncle Jimmy lived.

Jimmy was not Maureen’s husband. He was not related to us in any way I could understand, but my mother and father accepted him as a part of Maureen, so I did, too. I once overheard Maureen telling a visiting friend that one of the reasons she chose to leave Chicago, to keep her aunt’s house—big, unfinished, and slowly rotting—was because it came with a little house out back for James. The friend, a sharp woman in black, asked why Uncle Jimmy didn’t move into the big house with her, and Maureen was silent for a moment, as if she was testing out different answers. Finally, she said, “James deserves some dignity.”

The conversation moved on, full of stories about the parties Maureen and James used to throw, ruby red cocktails and themed costumes, apartments filled with gardenias in winter and freesia in spring. The people in the stories were always mentioned with caveats. “Of course, she’s not doing that now,” Maureen’s sharp friend said. Or, “I wish he was still with us.”

Uncle Jimmy lived in a tidy white-painted cottage with a roofed porch and a massive rhododendron bush shielding the front window. When I approached with the tea, he was sitting on the porch as always, at a little table with a typewriter and a ream of paper weighed down by a mug of coffee. A sweating water glass and a stack of books sat by his feet. He was a slender man with a thick bounce of dark hair and large, hooked nose.

“Munchkin,” he called as I crossed the wet grass. His lawn was very shaded, and it took most of the morning for the dew to lift.

I presented him with the tea, and kissed him on the cheek when he tilted his head in invitation.

Jimmy made me nervous. He seemed so easy to hurt. He had a look I now associate with the fragile, eggshell-thin mien of someone holding onto their sobriety extremely tenuously. If you were to scratch him with even a blunt fingernail, all his insides would come roiling out. At ten, the only thing I understood was that Uncle Jimmy was sad, and it would have been impolite and uncomfortable to ask why.

I asked Jimmy what he was doing, and he asked me what I was doing, and when I answered that I was bringing him iced tea, he said, “I’d better bring you some iced tea.” He emptied his water glass into the shrubs, poured half his tea into it, and handed it to me. I took a cautious sip.

He drank his tea in one huge swallow, throat rippling, and let out a smacking sigh of satisfaction. “The best there is. Tell Momo I say thank you.”

We traded glasses and I trekked back to the big house. Maureen sat in a threadbare armchair in the front room, a book open in her lap but her gaze directed out the window toward the road.

“He says thank you, Auntie Momo,” I said.

Her expression, when she looked at me, was unreadable. “Did James tell you to call me that?”

I felt flushed and unsure.

“That’s a special name, just for Uncle Jimmy.” Then she said, not unkindly, “Is there a name that your dad calls your mom that you don’t use?”

My father called my mother by her name, Agatha, which was old-fashioned but nevertheless suited her. Occasionally he called her “Aggie,” usually when he had an arm around her waist.

“Some people have different names to different people,” she said.

The mismatched, knocked-together furniture was buoyant in the late morning light.

“Don’t tell anyone,” she said, with a small smile, “but I used to call him Jim-Jam.”

I laughed. The strange tensions between us eased, and she rose. “What next?” she asked.

That summer, Aunt Maureen and I explored the land around the house. She showed me the sweet potato vines spilling over the plant boxes bordering the patio, and where the forsythia was supposed to bloom in the spring. “I think this is a radish,” she said, rustling the clumped leaves with the toe of her Keds. The rhubarb exploded, their blushing stalks reaching and stretching, and could not be restrained. We staked lopsided tomatoes, watched as cucumbers gathered heaviness, until we picked them far too late and they rotted on the vine. We cut curling stalks of lily of the valley and placed them in small glass vases; their dangling bells let off a heavy perfume. She taught me a song that her mother had taught her, tapping the tiny white flowers. Oh don’t you wish that you could hear them ring? That will only happen when the fairies sing. She seemed both delighted and confused by everything.

I woke early, a habit from my parents’ house, but Maureen refused to rise before nine. I snuffled into bed alongside her, into that warm nest of Maureen-smell, teased her for her mismatched pajamas, the frilly cotton top, the plaid flannel bottoms. Her breath against my neck was hot and damp.

Uncle Jimmy came up to the big house every night when Maureen was cooking. He mixed her a drink, helped me carry plates and silverware to the patio for dinner. They never treated me like a child, even if that meant my plate was heaped with food my mother would never have asked me to eat, tangy sauces, bitter greens. The light was strong and slanted until late in the evening, when Maureen lit candles and she and Jimmy smoked a cigarette or two and traded lines of desultory conversation. Sometimes we played cards, or they told me stories of their unbridled life before they’d moved to this strange, rambling road at the pinkie of Michigan’s mitten. On my last night, Jimmy sang to no accompaniment, a very slow song about a youth turned away from his hearth and family.

To read the rest of this story, please subscribe to the print edition or purchase a copy of Issue #13. Photo courtesy of Christian Heinz; view more of their work on Shutterstock. 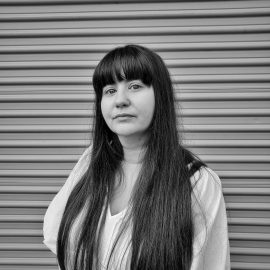 Rebecca Orchard’s fiction has appeared or is forthcoming in Passages North, Split Lip Magazine, Exposition Review,  Milk Candy Review, Tammy, Pigeon Pages, The Pinch, The Baltimore Review, and elsewhere. Her work on the Voyager Golden Record has been profiled in The Guardian, BBC World Service NewsHour, and Atlas Obscura. Her opinions on the project were …