A year before his own death, Art Smith, found himself in western Ohio at the service of First National Pictures, advertising with his skywriting, the company’s new moving picture, The Lost World. His mission bought him over the Little Miami River valley to The Land of the Cross-Tipped Churches, a farming region settled by immigrant German Catholics who still spoke a Westphalian, Oldenburgian, and Lower Saxonic dialect, an isogloss, centered around the Grand Lake St. Mary. Minster, Fort Loramie, St. Rose, Montezuma, St. Henry, Sebastian, Cassella, Chickasaw, and Maria Stein all these towns featured 19th century red brick gothic Catholic churches with their steeples topped with the crosses. Art Smith could navigate the valley by means of steeple, using the spires as a kind of slalom pylon, banking, vectoring back and forth over the rich grid of quilted farmland spread out between the towns. He was flying a new WACO 7 biplane, shaking down the prototype for the Advance Aircraft Company, the manufacturer, headquartered just a few miles north in Troy. The Lost World, a silent movie, was adapted from a book written by Arthur Conan Doyle who appeared in the front piece of the film as himself, introducing the trailing adventure. The movie concerned a scientific expedition to a lost and forgotten plateau in Venezuela of intimidating geology, ancient flora, and prehistoric beasts, dinosaurs of all kinds. Smith had been told by the accounts office at First Republic that Doyle himself, without revealing the source as a Hollywood movie, had taken test reels showing the various dinosaurs fighting and grazing and flying to a meeting of the Society of American Magicians. The audience, which included Houdini, was astonished by the extraordinary life-like visuals concocted by the trick photography. The stop-action animation effects were created by Willis O’Brien who years later would place an articulated puppet, King Kong, on a model Empire State Building attacked by a swarm of live split-screen projected Naval Reserve Curtiss O2C-2 biplanes. Art Smith would not live to see that monster’s death, but now he sat stone still, amazed in the darkened theater in Celina, Ohio, by the sight of the rampaging allosaurus attacking a family of terrified triceratops. He could, if he thought about it and if he looked very closely, see the slight twitch in the joints and limbs of the models as they moved, skipping from one frame of film to the next, but it was mostly seamless, this illusion of movement, how the eyes and the brain smoothed things over in the dark, skipping stone to stone, like his plane’s invisible ligature from one inanimate and monstrous letter to the next until, until it made sense. 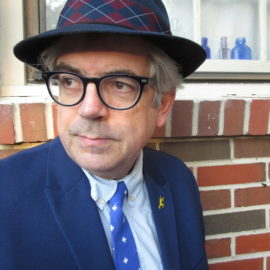 Michael Martone released and edited The Complete Writings of Art Smith, The Bird Boy of Fort Wayne, which was published in 2020. Publishers Weekly writes: “Though the assortment of encounters with early-20th-century luminaries can grow exhausting, Martone succeeds at crafting brilliant images in his descriptions of Smith’s stunt work. The result makes the reader appreciate …