Entering the train that night was like stepping into a diorama, the inside of the car covered floor to ceiling with contact paper of leaves, vines, and flowers. The car had been painted a shiny emerald on the outside too, part of an environmental campaign. This was in early March, when it was still difficult to find a seat downtown at rush hour. Angela perched next to a woman whose hips spilled into Angela’s seat. She’d seen the woman on the train before, always reading a book. There was no place to rest your eyes amid all the green. Tucked between leaves and vines were iridescent insects, a toucan, a capuchin monkey. The car lurched forward, and they were moving. Angela tried to glimpse the cover of the woman’s paperback. She couldn’t remember the last time she had read a novel herself. In her bag at her feet, she had stacks of briefs and whitepapers. She was thirty-four, had been living in the city for less than a year, and this was her first winter. During a brief spell of warmer weather, she had packed her parka away, and then after several days of blasting cold, had unpacked it again. Now she was too warm.

Her phone buzzed with one new email from work after another. She scrolled through the messages, then through the news, though reading in vehicles made her ill. Every day the headlines were more unbelievable. Her pulse beat with a dull, insistent anxiety. She dropped her phone into her bag and still it vibrated in her lap. All around her, people stared into screens, fidgeting. The green must have unnerved them too because they gazed up at the fake canopy, squinted each time the evening sun broke from the clouds. Someone sneezed, and a few people looked up. There was talk of a virus overseas, a hotspot out in Washington in a nursing home. A little boy sat next to his mother, kicking his legs, staring up at the white lettering over the leaves, trying to sound out messages about sharing the planet. The woman beside Angela glanced up from her book, and Angela tried to make conversation. “Can you imagine trying to install this? Makes you dizzy, doesn’t it, all these leaves?” The woman shrugged and returned to reading. Angela peeked over her arm to the words, You wouldn’t say that if you knew what I knew. Probably romance or intrigue. The train paused on the bridge to wait for signal clearance, and she gazed at skyscrapers across the river, the water reflected on a mirrored façade. Heat pumped from the radiators, and she loosened her coat.

At Merchandise Mart, a poster on the platform featured a child running toward a beach, the words, “Florida Awaits!” People shoved aboard as sleet pelted the windows. Several art students with portfolios, business people, a woman with a rolling cart heaped with all her belongings, a group of tourists. So many passengers crammed inside that a man kept stepping on Angela’s feet whenever the train tilted around a curve. He put his briefcase between his own feet, braced himself with a hand against the window. From his hushed words, he might have been a lawyer investigating something unsavory. “Just keep your head down,” he advised the younger man with him. “If we’re not careful, this could blow up in our faces.” They noticed Angela listening and stopped talking. 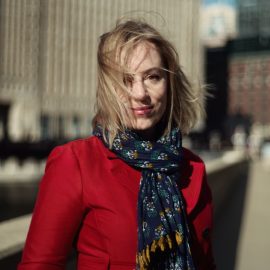 Rachel Swearingen is the author of How to Walk on Water and Other Stories, which received the New American Press Fiction Prize, and was named the 2021 Chicago Writers Association Book of the Year and a New York Times Book Review “New & Noteworthy Selection.” It was also a Foreword Reviews “Book Of The Day” …