Werner had feared his life wouldn’t turn out to be like literature. He believed he had lived an unremarkable life, and feared, as he entered adulthood, that he was destined for the routine and mundane, the very kind of ordinary that, try as one might, couldn’t be made fantastic by the written word.

But when he walked into his first day of Emerson College’s MFA program in the middle of August, his eyes scanning the few others already seated around the long table, they lingered on Helen, sitting in a beam of morning sunlight that crawled through the windowpanes. When he later used this moment of sudden infatuation in a short story, he went through great pains to describe a choir of angels; his faculty mentor told him such description was largely unnecessary, that it distracted from the core of the story. Werner reluctantly removed it from the final draft, but he scrawled the excerpt on a piece of scrap paper and kept it on his desk beside a framed photograph she’d taken of the Boston skyline on her first night in the city. She had given it to him for his birthday that October with a friendly nod and slight smile.

Werner hadn’t heard a choir of angels that first day he met Helen, but he did see something angelic about her. An etherealness encapsulated by her fiery auburn hair curling down to her shoulders, her great gray eyes that contained at once every color and then none at all, her straight nose ending with the slightest upturned bump that disrupted its smooth downward slope. She was something classic and elegant, a rarity if Werner ever saw one. He envisioned candlelit picnics in the park and strolls along the bay, serenaded by the mighty dark eastern sky, intimate evenings under the stars and clouds and passionately making love. Helen was the color and remarkability in life he’d been waiting for, and he fell swiftly in love.

He had known Helen’s sister, Esther, had been diagnosed with a brain tumor, as Helen had written many stories about people who had cancer or people who knew people who had cancer, and she’d been rather honest with Werner when he had inquired about this. Esther was diagnosed four years ago; she’d had surgery, she’d had chemotherapy, and the tumor wasn’t ever going away, but it could, for the time being, be contained.

That was, until now, the middle of December, three days before their individually scheduled departures for the holidays, Helen to a sleepy town in Connecticut and Werner to his grandmother’s house in Virginia. Helen started sobbing in the library, and when Werner followed her into the hallway, she told him that the end was near. Treatments hadn’t been working. The doctors had given Esther until the end of the year, but Helen’s mother thought they were being optimistic. Werner said he would drive her home the next morning and when Helen had started to protest, he insisted, claiming he would have to go that way anyways to get to his grandmother’s. It was only a partial truth, but, thankfully, Helen didn’t catch on.

After Helen stopped crying, Werner drove her home. As he was about to pull away from the front steps of her apartment building, Helen ran back down to the curb and knocked on the window. He rolled it down, the chill of the wind drying his skin.

“I was wondering,” Helen said quietly, “if you could spend the night.” In Werner’s hesitation, she added, “I just don’t really want to be alone right now.”

At first, nothing happened. They sat on the couch, Helen’s leg pressed against his as they drank cinnamon spiced tea, Werner listening as Helen talked about Esther and cancer and the general unfairness of life. When she started crying again, he put an arm around her and pulled her into his chest.

Looking back, that’s when Werner gets confused; he doesn’t remember how it happened, but somehow, Helen was kissing him and his hands cupped her face, then cradled her back, clutched her waist. He pulled himself away for a moment to tell her this maybe wasn’t a good idea.

“Well, since it’s helping.” Werner said, pulling her closer to himself.

He hit the back of his head against the wall, at which point Helen suggested they go to her bedroom. They didn’t touch each other as they made the long walk down the hall, and Werner became startlingly conscious of the quiet around them when Helen closed the door. When they started kissing again, he tasted salt from her tears; he slipped her shirt off over her head and noticed her eyes were watering. He asked if she was okay, and she nodded but didn’t say anything, not until he reached his hands around her back to undo the clasps on her bra and she said his hands were cold. Then they descended back into silence as they fell onto the bed, Helen reaching to undo his belt buckle as he looked down at her. They kissed some more and then they made love, and afterwards, as they recovered their breath, his arm went numb as Helen lay on it.

Werner thought about all this the next morning while in his apartment packing a suitcase for home, Helen browsing the bookshelves in his living room. He remembered the night before as sweet and tender and earnest, their bodies speaking the same language of love stretching into a blissful eternity, and they were intertwined, heart and soul. Him and Helen, Helen and him. Yes, this was it at last—the glorious color he had been looking for.

That morning, Werner forgot the truth of the night. He forgot that he could still taste her tears on his tongue as dawn rose, that as she had slipped off her skirt, there was a moment when her eyes caught his and they’d looked at each other. No, not at, into each other, and he had thought her eyes looked grayer than they ever had before. She quickly wrapped her legs around him and dragged him back into her, but all the while Werner was painfully aware of how still everything else was and of how very strange he felt at the center of this frozen room in a tangle of lust and passion—if it could be called that—while hundreds of miles away, Helen’s sister slept in anticipation of death.

To continue reading this story, please purchase a copy of issue #8. Photo courtesy of Fran Babij; view more of her work on Flickr. 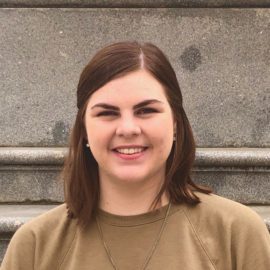 R.A. Wyeth is a student at the University of Michigan. Her story, “Like a Broken Statue Among His Marbles”, appeared in Issue #8 and is her first publication. Updated June 2022