The night before I introduce the unit on reproduction, I dream of losing teeth. In the space in between sleep and wake, eyes yet open, I am certain they are truly gone. My husband Wallace is asleep beside me, flat on his back, hands folded just so upon his chest, a picture of death. I go to the bathroom and stand there in the brightness, grinning into the mirror. My tongue licks each root against pink gum, and each is secure. But I am afraid my teeth might crumble again if I go back into the dark room with him. So I creep downstairs and turn on the aquarium light and sit on my mother’s old couch watching the goldfish poking among the colored pebbles for something to eat.

First period, I lay out licorice ropes and gum drops and toothpicks so the girls can make DNA models in groups of three.

Don’t touch anything yet, I say, but of course Sydney eats one, then Makayla, Emma, Makenna.

Are we being good listeners?

Come on, Miss, just one, Aurelia pleads, as if I am her mother.

Just one, I say, and then walk around replacing the candy on the Formica desktops as their tongues turn red. We get off course when Lexi rats out Taylor for Snapchatting this boy she likes, causing Taylor to call Lexi a bitch, causing me to have so send her to Sister Agnes. The bell rings as I am explaining the reasons for the color of their eyes and hair. Aurelia’s hair is dyed ink-black with dishwater roots showing.

I don’t have them call me Doctor, though my mother says I’d get more respect if I did. They call me Miss, though I wrote my full married name on the board every day for the first month. At first I thought it was a question, Miss?, like they wanted me to fill in the blank space, and so I reminded them of Wallace’s last name, mine by way of him, thinking they had forgotten. But that was not it at all. They didn’t care to know. Miss is the whole of who I am. I am in my first year. I am thirty-three, not twenty-two like the other new ones who come for a few years before applying to grad school or moving on to public school where they can actually make some money.

When I left my residency, I told people it was so Wallace and I could start trying. I’ll go back, I said, when the children are in preschool. Then while Wallace was at work, I sat all day at the computer playing online backgammon and looking up anatomical charts of osteichtyes and arthropods. When he got home, I’d lie and say I had gone to the gym and to coffee with friends. It was my mother who had the idea of calling her friend who knows Sister Agnes. It’s only part time, my mother said. You need a diversion.

The names of the girls at Our Lady of Consolation swim in loopy heart-dotted purple ink in the Name:____ blank of worksheets and quizzes. It took me some time to learn them. For the first few weeks I’d point and nod, Yes? Once, at the end of class, Makayla came up to my desk and asked if I knew her name, and I said Makenna, and she rolled her eyes and walked back to the other girls and said, I told you. After that, I stopped writing Wallace’s last name on the board. I accepted Miss as the extent of myself. I got hold of last year’s yearbook and studied until I had them down cold. At night they flashed, clearly labeled, across my brain like a whirring filmstrip as I lay next to Wallace, not sleeping, afraid of what I might dream.

Our Lady smells like church basement and Ajax and toner cartridges. I stay here all day though I just have the one class. Teacher’s lounge, lunchroom, classroom when it’s empty. Sometimes I leave in my car for an hour, sit in the Dunkin parking lot. I have learned to take it like my colleagues – extra cream, extra sugar. I have developed a craving for sweetness. The other version of me took it black.

In med school, I enjoyed the dissections. Superficial thorax and abdominal walls and peritoneal cavities and brain and heart and ovaries. The organs fit together like a perfect ecosystem. My cadaver satisfied me in this way for a time. Then, during my first few assists as a resident, I experienced the rush of slicing into the palpable flesh of a living creature. And the attending doctor would give me freedom, wandering away, coming back to check.

When it happened, no one discovered it until the mother was already dying of sepsis. I had severed a portion of her bowel during the c-section. The baby was alive, but the woman was dead. No one had caught it. I hadn’t. And I wanted to say I was sorry. But that isn’t the way it works. It isn’t advised. No one made me quit. They advised against that too.

When Wallace hears me crying in the bathroom or knows that I have not slept, he tells me that I need to put it behind me. My mother says the same. These things happen. You can’t throw it all away for one bad incident. You can’t blame yourself.

Babies floating inside their mothers in their silky sacs have enough to protect them. I half-dream of bathing in amniotic fluid, a sea of it to swim in, but outside of my mother somehow. God help me. I don’t want back in.

The girls can’t keep it together during the class on the male reproductive system. That thing is nasty, Lexi says, soliciting a chorus of consent. I tell them to focus. But I understand. The paint on the plastic model is peeling, and there is a rusted screw dead center.

Who can find the prostate gland? I say. Who can tell me what function it serves?

Aurelia is quiet in the last row, doodling spiral shapes on the cover of her unopened notebook, and I wonder if it’s true, what I have heard in the teacher’s lounge. Runs in the family — her grandmother is pretty much my age, Gary says. The mother left when Aurelia was eleven.

Then he winks at me like he does. Gary is forty-something and teaches the other section of Grade 9 Life Science, plus two Grade 6 Earth Sciences and a math. He likes to slide in close in the copy room as he points out the sections of the textbook I should skip. And then he’ll compliment my necklace or something. Sometimes I want to see what he would do if I ever kissed him. Or pulled him by the hand into the custodian’s closet and offered to take it standing, or bent over the utility sink, clattering among the push brooms and hand sanitizer refills. What then? Would the winking stop?

When I walk the halls, I too have heard the girls locker-whispering about Aurelia. I watch her when I have lunch duty, but I can’t see anything certain beneath her baggy polo as she sits in front of a barely touched tray across from two exchange students who talk to one another in Korean.

Wallace and I dine on Saturday night at the club with my mother. My favorite part is the way the stargazer lilies from the centerpieces tickle my insides like a diary key fiddling to where the lock catches. I order the sole, then imagine its flat body floating along the seabed searching for sandworms with close-together eyes. I poke into the neat little roll of it.

To continue reading this story, please purchase a copy of issue #8. Photo courtesy of smerikal; view more of her work on Flickr 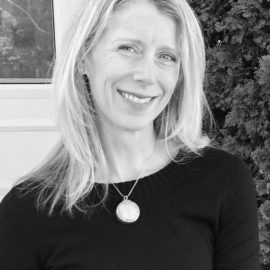 Ann Lightcap Bruno’s work has appeared in Barrelhouse, Word Riot, Sweet, Painted Bride Quarterly, Vestal Review, and Talking Writing, in addition to other publications. She teaches English at the Wheeler School in Providence and lives in nearby Cranston, Rhode Island.