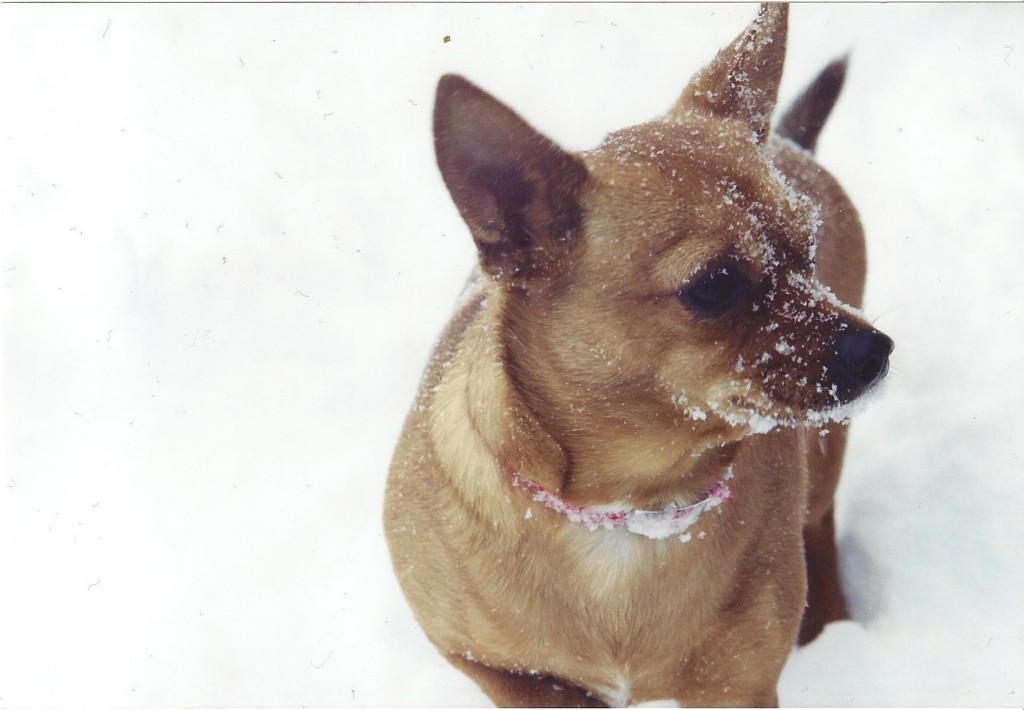 The barn was lit by a single lightbulb. Cement floors dusted with straw, three by three stalls packed with chickens and goats. The first one to my right held two palm-sized puppies with their mother, her ribs looking like pretzels covered in caramel. She was the old man’s breeder, had watched at least a dozen of her children stolen away. My grandmother still cannot forget the look in that dog’s eyes as we carried her baby daughter out of the barn.

Three months later we celebrated our first Christmas with Maddie, as we named her. She sniffed through the presents, sat next to those smelling of Pup-Peroni, and waited. She didn’t claw through the foil like my aunt’s puppies, only watched my sisters and I unwrap Barbies and books until her turn came. Maddie and I grew up in the woods, leaping over fallen branches with our legs sinking into the snow-blanketed mounds of leaves. After the snowstorm that covered my father’s Sunbird, she carved paths to the holly bushes to chase out the squirrels, sticking her nose through the berries until her eyelashes froze.  I took her inside then and wrapped her in a blanket, held her by the fireplace until the snow melted from her whiskers.

Two years ago in late May, Maddie had four seizures within two days. The vet diagnosed her with a brain tumor. Six months, at most. I am not a spiritual person, but what I remember of the following three months was praying for Maddie to make one more Christmas.

She has made three more birthdays, heard the vet say “there’s a chance the diagnosis was wrong,” and endured ACL reconstruction in October, our new vet calling Maddie the most adoring and youthful fourteen-year-old she’d ever seen.

I believe Maddie is probably like her mother, coated in a thicker caramel, eyes patient and wise. On Christmas, we celebrate those eyes, both the mother’s and the child’s, both the vacant and the loved.

Kaila Young is a former editorial assistant for Story and writer for Susquehanna Style. She was a Professional Writing major at York College of Pennsylvania and co-editor of The York Review.