Listen, most sinkholes occur on Thursdays. If you don’t believe that, go Google it and see for yourself.

If that doesn’t suit, come and take a look, this Thursday afternoon, at my neighbor’s yard, so perfectly landscaped until an hour ago. Now you can stand half way up Wanda Brooker’s rock garden bank and look down into yucca, iris, hostas and whatnot tumbled among folds of her perfect, treated grass. On the opposite edge are the roots of her white dogwood and crepe myrtle. I bet they’re goners. A sure thing is the one my husband Roy, like a little boy, calls a smoke tree just because of all the fuzzy stuff that comes out every year and carries its seeds away when its ready after changing color a few times. It’s tilted more than would make you comfortable to stand under. It looks like it just needs a push.

If it’s not gravity that takes them down, it’ll be the repairs. Who’s filling this all in and with what? Rubble, you can bet on that, since it’s near to twelve feet down and forty feet across. And sure as I’m standing here listening like I’m a friend, someone fussy as Wanda will be needing a layer of top soil. Trust me, she can tell whoever does the work to be careful a million times and what difference will it make.

“Is there insurance for something like this?” I ask, standing with Wanda and her husband Gus where her lawn has dropped like an elevator. Wanda says she doesn’t know yet, but she has them busy at State Farm or whoever will try to say this was an act of God.

There’s mines around here, she says, the first I’ve heard that. “That’s five miles and a tick up to Sacksville,” Gus says. “More likely an underground spring,” he goes on, but there’s no sign of water in this pit. I’m putting my money on the construction of the new school a hundred yards from here where there used to be a corn field. Somebody cut corners or didn’t know which way was up.

“Whatever,” Wanda says, “this beats all,” and she goes back to the brink as if maybe this time her back yard has left passengers off and is beginning to rise again.

“It reminds you it’s God’s world we live in,” her husband says, and she shoots him a look he doesn’t notice because he’s staring up as if he expects to see an enormous head nod in agreement.

“Six feet, three inches from the house—that’s where this thing stops,” Gus says. “Exactly my height.” I half expect him to lie down to prove it, but he angles across the broken bank, stepping through the last bunch of iris and onto the patio. Wanda sucks in her breath seeing that patch of green leaves trampled, but Gus doesn’t look back, disappearing through the side door.

She’s lucky, I tell Wanda, because her husband, a bull of a man even in his 50s, will take to fixing a hole in the earth. “Gus is a fixer, all right, but he’s not a sculptor, and that’s what this will take. “I don’t know if I can live in a place with an ugly yard. Everything I love is gone.”

I almost turn around and look to where my yard is a country mile from perfect what with the skinny weeds that always pop up in July looking like a ready-to-be-harvested crop. The lawn is otherwise brown. Roy thinks it’s great he doesn’t, as he puts it, “have to fuck with the grass once the hot weather sets in.”

Instead, I try to cheer Wanda up by mentioning the sudden sinkhole near Sacramento that swallowed one homeowner, kitchen sink and all, like a land-locked shark. “The husband was crushed,” I say. “Dead as dried snot.”

“There’s no comfort in another’s misery,” Wanda says. She notices, like I do, that the neighbors on her other side are standing on their deck, that the woman who lives on the other side of them has walked half way across that adjoining yard to look without getting close enough to have to talk. When she hikes up to the deck, I know they’ll be talking about what’s under their own yards, whether a sinkhole is as catching as the chicken pox. “Your Roy off somewhere he’s not out to rubberneck?” Wanda says.

Roy had said, “In a minute” when I called him to look. I waited for two and went outside, done with gawking out the window. I didn’t look back. He wasn’t coming upstairs until that game ended.

“I thought that was New Year’s?”

“He watches ESPN Classics. All the Super Bowls. The World Series when the Phillies were in it. Home Run Derby. You know.”

Wanda glances up at her house as if she expects Gus to be listening. She steps away from that hole like maybe my news will widen it. “Talk like that would put the hole in your yard if there was anybody listening the way Gus always claims there is,” she says. “Right away, he said, ‘We have Job’s back yard out there. Let’s hope we don’t have his house, too. Let’s hope this isn’t the start of something.’”

To stop the Bible stories, I tell her the whole story about the Sacramento sink hole. How there’s pictures taken from in front of the house that make it look normal, and then, right there in the middle, there’s that huge hole, ten feet deep and half filled with rubble. Before too long, that hole doubled its size. It kept growing. Wanda looks at me funny, like she’s imagining a vacancy right underneath our feet.

“It took days to dig out that body,” I say. “Everything was unstable. The response team had to be cautious. No sense risking another man’s life for what was a recovery, not a rescue. That wife might have been standing there thinking I have all day in front of me now. There’s no housework to be done.

“Aren’t you the wickedest,” Wanda says.

“She might’ve,” I say. “She just might’ve.” I shut up and move closer to the edge. I’m not interested in the doomed plants and decorative stones at the bottom. I look at the sides of that hole where roots protrude and rocks are exposed. You don’t often get a chance to see what’s holding you up. And what’s failed. As if the yard needed a wheelchair from now on.

Wanda stares at me. Let her look, I’m thinking. What can she do with this natural wonder in her yard? Soon enough the word will spread and a crowd will gather unless she takes a shotgun out to greet them. 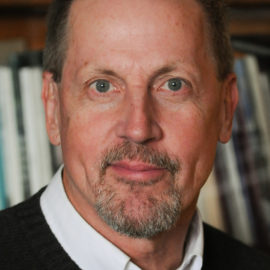 Gary Fincke is the author of multiple books of fiction, poetry, and nonfiction. His books include the collection of stories A Room of Rain (West Virginia University, 2015), the poetry collection Writing Letters for the Blind (2003), and The Out-of-Sorts: New and Selected Stories (2017). An earlier collection Sorry I Worried You won the Flannery O’Connor Prize …