The border hasn’t always existed. It was put there for complex geo-historic and political reasons so long ago that no-one knows much about them now.

I live right next to the border, which is a line drawn in the dirt. That is also true of my home, which is a series of straight lines, bisecting angles, and curves. Over the border is my neighbor, but because we live in different countries, we are not permitted to speak to one another. This is also for complex geo-historic and political reasons that I cannot begin to fathom. I could, if I wanted, reach out and give him a good poke in the ribs with a stick; that is how close we are. But he is my neighbor and has done nothing to me, so why would I want to do that?

My neighbor’s country compels him to rise at six o’clock every morning. He is given one day off a week, but this day must be spent engaged in prescribed activities, the details of which are unclear. Whereas I do not have to rise until at least nine, and although I do go to work, if I don’t feel like it some days, then I don’t have to, and I am entitled to three days off each week with a generous holiday allowance. Also, on my days off, I am permitted to do anything I like and frequently I do. I learned about my neighbor’s country in school and so know that he is not similarly permitted to learn about other countries because he would become envious and seek to live in those countries, or worse: try to do them harm.

Now, I like my neighbor, to the extent that it is possible to like a person to whom I have never spoken a word in my life. But as he can see me, so I can see him, and I know that he always rises at six even when he is unwell, that he wears a stoic sort of expression—as though he is aware that his life is a hard one—and although we are not permitted to speak, we do exchange nods and sometimes even smile at each other—we are human, after all!

But I worry. Because I am a compassionate sort of person, I try to see things from his perspective. I imagine me being him and him being me and our living in each other’s homes; I imagine rising at six every morning, whether I want to or not. And I think that if I were he and he were me, I might not like me very much, even though I nod and smile sometimes and think that I am a good person. Because I wouldn’t know this latter point, not being me. And so not knowing this, I might misconstrue my nods and, instead of taking them in the friendly spirit in which they are intended, might see them as condescending or even hostile, especially if I have woken me up at six in the morning with my noise and actually I could probably stand to be a little more courteous in respect of me with regard to my rising early and sometimes that is indeed what the nod is signifying and also the smile is not always genuine.

But for the most part the nod isn’t signifying that and, generally speaking, the smile is genuine, but again…how is he supposed to know?

Other people who live in my country have similar concerns. They have nothing against their neighbors but can’t ever be sure of what they’re thinking, and this worries them. Still others don’t like our neighbors at all. They are distrustful of them on account of their envy of us, and even for those who have no immediate reason to be distrustful, our main idea of them is that of an envious people. And because we do not know what they are thinking, it becomes easy to distrust them, too, because they are envious and envious people want what they do not have and what others possess and maybe it is possible that they might also want to come into our country and take our things from us. Some people think they might do this because they are less sophisticated and civilized than us, but I think they might do this because I have imagined myself as being my neighbor, and if I had to live the sort of life that he did whilst observing the sort of life I have, I think I might try to come into my country and take the things I have from me.

There are some people who think the best of our neighbors and feel sorry for them because they have to live the way they do. They write letters and make placards in order to convince others of their way of thinking, but they don’t often achieve this. And because most of these people don’t live next to the border anyway, they also don’t see the stoic expressions our neighbors wear—which, on reflection, look more sneaky than stoic—and so can’t begin, with all their positive thoughts and goodwill, to imagine what it is like for us, the border-dwellers living right up close to these terrible creatures who, not being as sophisticated or as civilized as their own neighbors, are probably backward and less than us somehow, perhaps not even human. Words like “good” and “evil” are used in relation to us and them and then we begin to use the words “us” and “them” more than ever and these divisions and categorizations begin to multiply and so this is how we make sense of our world.

Then someone posits that we, with our sophisticated lifestyles and civilized ways, might not be so well prepared in the event that our neighbors decide to act upon their envious thoughts because, while we are lying about in bed, they have been up from a very early hour, conspiring against us. So it is decreed that we, too, should rise at six, and what happens is that some of us actually get up earlier than that, just to show everyone who is who and what is what. And not everybody is entirely happy with this abrupt and unconsulted-upon change to our lives, but who else is responsible for it but our neighbors?

Other things change, too. Such as: I begin to remind my neighbor that, although I am a compassionate sort of person, I am also not to be fucked with and he’d better remember that if he ever starts to let his sneaky little ways get the better of him. For example, when he is at work, I throw rocks at the lines in the dirt that comprise his home so that they get mixed up with the rest of the dirt, making it not clear where his home ends and where the street begins, and when he sees this, he gives me look as if to say, “What the hell is going on?” And I give him a look as if to say, “You know exactly what’s going on you sneaky so-and-so, and if you know what’s good for you, you’ll keep your nose clean and stay away from me. Also, stop making so much noise in the morning, else I’ll do more than just poke you in the ribs with a stick.”

And now, we are at war. I am not sure why, except that it is probably for complex geo-historic and political reasons that I cannot begin to fathom. And I no longer nod at my neighbor or smile but grimace at him and shake my fist and think of ways in which I would like to see him made less stoic, perhaps by smushing his face into the dirt where his home used to be, stones having long since eroded it, reducing him to a street-person. Or I might subtly undermine his child’s confidence or embarrass his wife or do anything that might cause him to experience a feeling akin to extreme sadness and despair: something that would break his spirit and wound his heart. And I do this—we all do this—because we are frightened, we are terrified, we are so very afraid that he might want the things we have so much of for himself, that he would be prepared to do anything to get his hands on them. And so he must be stopped, before something terrible happens. 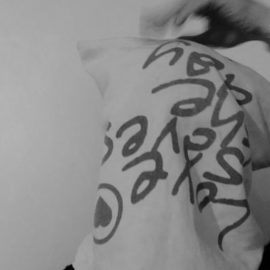 JL Bogenschneider is a writer of short fiction, with work published in a number of print and online journals, including The Island Review, Ellipsis Zine, 404 Ink, minor literature[s], Necessary Fiction, PANK and Ambit.