The fat engulfed Mrs. Parathy. It settled around her gold bracelets like a soft brown sludge, bulged out of her sleeves, puffed up around the straps of the expensive, gem-studded slippers she owned by the dozen, made it difficult to walk. Walking was already hard, a slow advance through the overstuffed rooms of her flat, while pawing at the furniture for support and glaring at the servants—so far as she could glare through her haze of hunger—so they didn’t snicker. The servants did the shopping now—Mrs. Parathy hadn’t left the house for months—armed with lists on which she’d added, until recently, samosas and kulfi, ghee and paneer. The paneer and ghee and kulfi had made Mrs. Parathy’s skin glow and nourished her hair which was still thick and black from the treatments the salon girl came home to give her, making her eyes look like plums in her cake of a face, her lips smeared with Wine With Everything, a garish maroon frosting.  “Pig’s eyes,” she said. “You fat pig.” All her disappointments had coalesced into this one disappointment, the way a river spills into the vast, vast sea.

She was speaking to the mirror on her vanity, the tube of Wine With Everything poised in one hand. Shivu would be here soon—his flight from New York arrived at noon—and Padma was on her way. She’d hoped to see some difference—cheeks flatter by a millimeter, the faint evidence of a neck, a sliver of hope, a toehold—after the dreadful diet she’d been on for weeks, devised by some thin sadist, but no, there was nothing.

The doorbell rang, and her daughter Padma breezed in, wearing a ghastly pink-and-green salwar kameez and smelling of the local train, face bathed in sweat, enormous smile hiding God knew what miseries. Padma was thirty-nine but looked forty-five. She was only a housewife after all those years of study, Mrs. Parathy up with her every night to provide moral support and midnight snacks. She’d once wanted to go to America, too, like Shivu, but had precipitately married a friend’s brother, a banker who’d promptly buried his nose in work and was now a mythical personage present only via Padma’s frequent mentions—Ravi said…, Ravi won’t…, Ravi likes…—Mrs. Parathy hadn’t seen him in years. Whenever she saw her daughter, leathery from the sun, proud about knowing useless things like where in the wide city to find the best Alfonso mangos, Mrs. Parathy saw the ghost of the willful, pretty girl she’d once been.

Padma set her massive handbag down—she was always prepared for apocalypse—and said, beaming, as if they were in for a joyful family reunion, “They should be here soon! Remind me, Ma, how old is the kid?”

“I brought some chocolate and some of Dev’s toys and some books. She should like them, no? They’ll be so tired. I’ll go see to their room.”

She paused, her years as self-appointed caretaker to her mother having made her as responsive to her moods as a tuning fork is to sound. “What’s wrong, Mom?”

Mrs. Parathy’s eyes filled; embarrassed, she averted her face—the hunger was making her cry now. Breakfast had been hours ago, half a slice of dry toast followed by two glasses of the greenish-brown tea that was the most important feature of the diet. “There is no limit to how much tea you can have,” said the Ayurvedic doctor, expansively. The devilish tea that first bestowed a gratifying feeling of fullness, then, within minutes, made her run to the bathroom to sit shivering on the toilet, the tap running to muffle her noises, and hope that her insides would spill out and she could flush away years of mistakes.

“It’s not working,” she said flatly. “I’m two kilos heavier today, and look at this.” She slapped her belly so it jiggled and looked at Padma accusingly.

It was Padma who, with uncharacteristic determination, had thrust the present diet on her, and all the other diets; she who’d snatched away her kulfi and ghee and paneer. She was ashamed of her mother, that’s what it was; on top of everything else, there was now this between them. At her behest, Mrs. Parathy had suffered banana and yogurt and juice diets, zero-carb and zero-fat diets, five/seven, three/seven, and one/seven diets, to no avail. “It’s all in your mind,” the latest diet doctor had said, reeking of powders and balms. “Take possession of your mind and you will succeed!”

“It’s only been two months,” said Padma, her face hardening. “It takes time. Do you want to die? And at your weight two kilos is just measurement error. Shivu’s coming after nine years. Can you be good, at least today?”

Soon she was rummaging in the hallway closets and bustling to and from the guest room. She knew her way around, of course. The children had grown up in this flat in a leafy corner of the city, now worth crores. Mrs. Parathy’s father had left it to her, along with other prime properties, the rental income from which had supported the family for decades, offsetting her husband’s enduring state of joblessness—he had basically grasshoppered his way through life. But she hadn’t simply lived off her inheritance; she’d made investments and grown the capital, shrewdly holding her ground through tempting offers from opportunistic buyers who wanted to tear everything down and build skyscrapers.

Mrs. Parathy didn’t answer. This fake cheerfulness—this was what would kill her. This trait that everyone in the family but she shared, this ability to squash the truth.

Penguins were irrelevant. Shivu was getting divorced.

To read the rest of this story, please purchase a copy of issue #13, which will be released in March 2022. Photo courtesy of nelea33; view more of their work on Shutterstock. 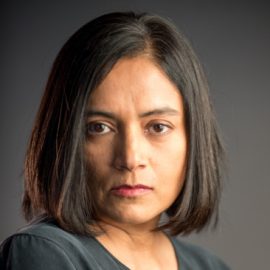 Anu Kandikuppa’s essays, short stories, and flash fiction have appeared in Colorado Review, Michigan Quarterly Review, Hobart, Salt Hill, The Cincinnati Review, Epiphany, and other journals. Her work has been nominated four times for the Pushcart Prize, nominated for the Best of the Net anthology, and longlisted twice for wigleaf Top 50. She was a …