Born in 1890, Tod Browning, one of the first horror genre directors, began his career during the silent film era. “He was the John Carpenter of his day,” claims Dr. William Dodson, Professor of Rhetoric, Literature, and Media Studies at the University of North Carolina at Greensboro. Browning directed such films as the original Dracula (1931) with Bela Lugosi and a string of horror blockbusters starring Lon Chaney. Due to his box office success, MGM gave him creative control of his own work, allowing Browning to make more artistic and interesting films. However, with the advent of “talkies,” MGM shortened its directors’ leashes, and Browning was forced to allow studio and producing executives to interfere with his filmmaking. It was only after he proved his continuing ability to bring box office success that Browning was given creative autonomy over his pet project, the film Freaks (1932). The studio agreed to release the film—with fifteen minutes of cuts.

It was a box office disaster.

Supposedly at the premier of Freaks, women fainted, people vomited, and all were horrified. In fact, the film was so controversial that Browning was never permitted to direct with creative control again. After just a few more films, his career ended.

The inspiration for Freaks came from Tod Browning’s past. As a youth, he was fascinated with all things carnival, and at the age of fifteen, Browning ran away to join the circus, where he made his way as a sideshow freak by becoming The Living Corpse. In this act, Browning would be buried alive for several days, living on malt balls stuffed into a pocket in the coffin. Later, he would be dug up in front of the crowd before the circus left town.

In the movie Freaks, Browning highlights what it means to be “normal” versus “abnormal,” both physically and psychologically. He also toys with the connections between physical deformity and morality (as well as immorality). The freaks in the film vary widely in their deformities, from pinheads, a birth defect in which the head is smaller than normal and causes mental retardation, to those with limb reduction, in which the arms and legs never form during gestation. These physically handicapped people share moral values and are bonded together as a family unit. In contrast, the supposedly normal people in the film may be so in appearance, but a few of them display the ugly side of normal. The avaricious Cleopatra and Hercules, for instance, stop at nothing—even murder—to obtain money.

In the vein of Expressionism, Browning uses natural light to draw attention to the freaks. Their bodies are twisted, deformed; we are forced to see them as they really are. In general, Browning is concerned more with the visuals of the film than the sound. His start in directing silent film gave him a solid foundation in the aesthetics of moving pictures, but sound was secondary to him even after the advent of talkies. Thus, Freaks is visually rich in a lovely way. Using groupings of people, both normal and freakish, Browning uses their bodies to send us a message. We are shown the freaks doing everyday things despite their disabilities and, in some cases, because of them. Browning doesn’t rely on makeup and costuming to create the fantastical deformities of the freaks: They are actual people with physical handicaps; and perhaps even more surprisingly, they are adept at doing the things we don’t usually assume handicapped people can do. It seems normal to see conjoined twins flirting and getting married. It seems normal to see a quadruple amputee lighting a cigarette with ease. The man with no legs even walks so well on his arms that it’s hard to notice his disability. The fact that the freaks overcome their physical deformities makes the contrasting psychological deformities of Cleopatra and Hercules so glaring, so alien.

Three scenes in this film stand out as examples of Browning’s directorial genius. The first is the last scene of the opening credits, in which the word “FREAKS” is positioned front and center. A hand tears through the screen and rips out the word. In a genius transition from credits to film, the camera then pans through the tear, and we come upon the scene of a barker leading a group of people through a sideshow attraction, one oddity at a time. The barker is holding a torn paper. He wads it up and throws it away while he talks.

The second is the series of shots of the freaks hiding under the wagons in the caravan. Their eyes are framed in light and their bodies in shadow. As an audience, we know that the freaks are watching; they know the evil the normal people have planned. It is a sinister moment.

In the third, during a dark storm, a group of freaks chases Hercules through the mud. Hercules is alone, but the freaks are en masse, crawling after him by whatever means of locomotion they possess. They move with startling swiftness in a little knot of arms, legs, and deformities: The psychologically deformed fleeing the physically deformed.

The names of the freaks were not changed for the film. Many of them went on to have careers in exploitation films, and some of them even became moderately famous.

This is a film that I took my twelve-year-old daughter with me to see. I had no prior knowledge of it but expressed concern that it would be too dark for her. She was still up for it, and I didn’t find it to be a film from which I would shield her. When we talked later, she wondered aloud why the film was so controversial. She speculated that it was because of the physical deformities of the majority of the cast.

Even today, we have a hard time accepting deformities of the magnitude displayed in Freaks. But I didn’t feel that when watching the film. The freaks were portrayed in such a way that they felt normal. They were real people with real hopes and real dreams. This was the reason the movie was so controversial: The deformed were portrayed as people with feelings and normal lives—and that made Browning a progressive far ahead of his time. But Freaks arrived too soon. The public wasn’t ready for its message. To Tod Browning, the freaks were people. They were humanized when we wanted for them to be animalistic; we didn’t want them to be people. We didn’t want them to be “like us.” But they were. They are. And that can be hard to accept. 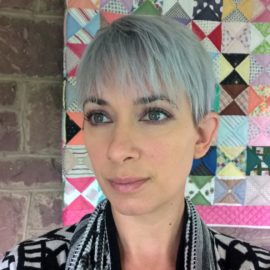 Andrea lives in York, PA, with her longtime boyfriend—Andrew—the youngest of three daughters—Rowan—two cats, one pooch, and lots of fish. Most of her time is spent working at the family business, writing random things, sewing haute couture, and organic gardening. She needs to fit in more time for reading, hiking, biking, kayaking, camping, and traveling. …