The crows started fighting early that morning. Their sawmill-keyed rants from a nearby tree made it impossible to continue sleeping, but I refused to open my eyes. I lie in bed watching as the white letters C-R-O-W-S appeared singly before a sea of black feathers, the opening credits of a scratchy Super 8. In this old movie I am eight and nervous about singing a solo piece for a Colonial Days picnic. I had been a member of something called The Little Moccasins and was selected to sing solo not because I was good but because I had emotional problems. My father was in town that weekend and noted a crow flying straight overhead. “Good luck,” he says.

One of my college roommates used to ask me to help her rehearse lines for plays. “How would you say it?” she wanted to know in regard to a line that went “I see my life on the edge of the world, and I don’t really seem foolish but wiser than I’ve any right to be.” She had only a few things to say in this play because she got raped and strangled offstage at the end of Act 1. But this one statement carried enormous weight. Being that I had no idea how to speak aloud with conviction, I lied. “I would say it as if I were looking at a crow flying high overhead.”

I turned my back on the curtained window and the crows and the Super 8 and remembered how I have not done a good job with creating myself. Where was that intensity of feeling I could set my masts by? I used to naively believe it had a physical origin—the elastic sensation that stuck around inside your head after sex, even if the sex was sloppy, a dropped gallon of milk that spread quickly into the next room. But usually I experienced physical passion dissolving as quickly as it cranked itself up. The elastic sensation barely amounted to feeling let alone truth.

Books suggested it might work like a Buddhist joke, achievable via a series of mundane actions that somehow manifest into enlightenment—getting up early and feeling clean after a shower; my favorite sneakers and the sun on my shoulders as I walk down the street when most people are still sleeping. Without this elusive feeling, however, life scrolled by as a succession of scenes where I pull off something just barely—like singing one whole song at Colonial Days.

The crows were still at it when I went outside to the grotto patio to read the Sunday paper on a white plastic chair. It wasn’t long before I spied a large, eyeball-devoid fish head lying on the concrete. Clearly this semi-cadaver was central to the drama. I suspected that it wasn’t even dropped by them. Probably by a seagull, but the crows had moved in with Sopranos waste management efficiency.

The escalating caws indicated that my standing between the birds and their booty was now the source of their anger. Their haranguing seemed like the Greek chorus you’d get in a Walmart parking lot. Or maybe they were mocking me for playing the innocent reading my paper on the grotto patio. I knew I was guilty, that I deserved, at that moment at least, to be mocked.

I was involved with a married Tufts professor who was 52 and a jerk. His wife was in Thailand for two years; his sons went to Choate. They had a second house in Woods Hole and the boys lived there during the summer. I met him when I was looking for my lost cat. He seemed to relish saying “I’m not going to leave Kathe for you,” and I would nod as if this sobering news was being delivered for the first time. He made me feel 15, which was actually a good age to feel when you’d just turned thirty-two.

To read the rest of this story, please subscribe to the print edition or purchase a copy of issue #13, due out in late March 2022. Photo courtesy of haveseen; view more of their work on Shutterstock. 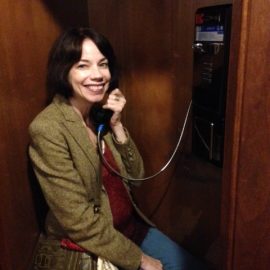 Barbara Sutton is a speechwriter, journalist, development writer, and book editor. She is the author of the story collection The Send-Away Girl (University of Georgia Press, 2004), which won the 2003 Flannery O’Connor Award for Short Fiction. She was a finalist in the 1997 Missouri Review Editors’ Prize contest. Her stories from The Send-Away Girl …